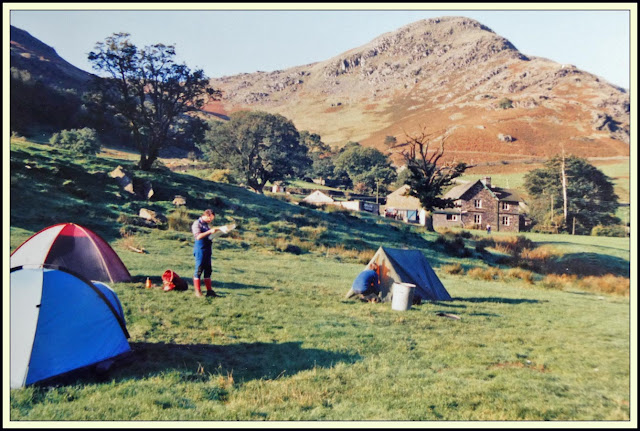 Memories of a fine weekend in beautiful weather. Sadly, neither Dafydd nor John is able to share these reminiscences with the rest of us. We remember them fondly.
11 to 13 October 1985

Ian's Indulgence
Inch Events Inc, in association with D Wynn, organise a trip for JM as they haven't seen him for a while.

Accordingly, Inch and JM pitch up at Glenridding and adjourn to pub by 9:30. Inchsport is a new Alfa as the old one got crushed by an articulated lorry on the A1. Why didn't he send postcards from ?

Wynn, Scruby and Banfield leave 7:15 pm, Wynn's ancient charabanc being left at . Fish and chips in Penrith, then on to the campsite, and reach pub by 10:15 after leisurely pitching of tents.

Clear night, cool, but all have winter gear.

Still no cloud (all day).

Dafydd's sausages pervade the atmosphere and everyone lazily gets up. Only two or three other campers on the site, which is well equipped with new fittings and lots of hot water. 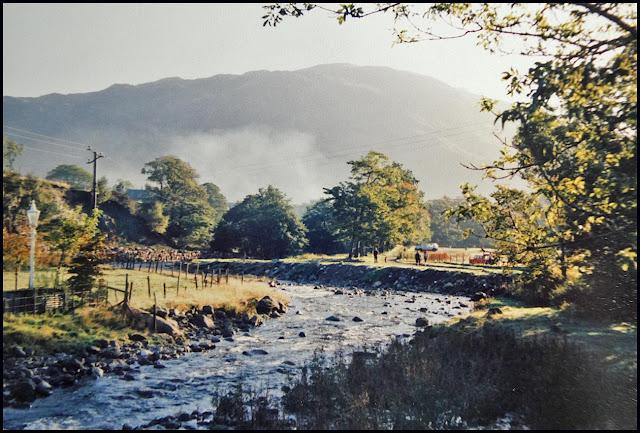 9:45 departure up Helvellyn via Mires Beck (Martin) Nab Crag (the rest) and Striding Edge (all). Martin finds a contouring path to the right at the end of Striding Edge, with a good view of Red Tarn and an exit to the summit.

Brew up / flask / water bottle / lunch stop, then on to Nethermost Pike then Dollywagon Pike. 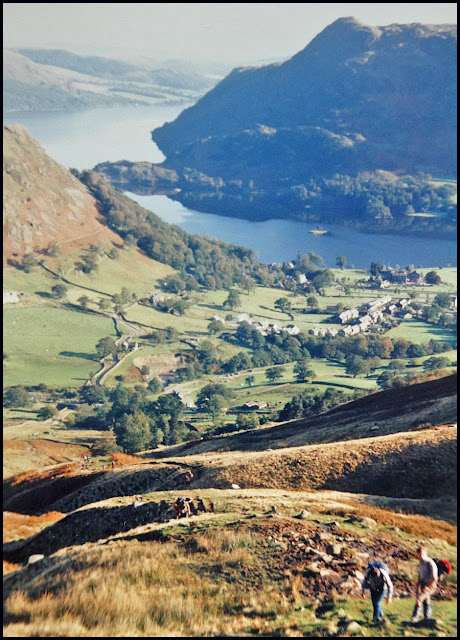 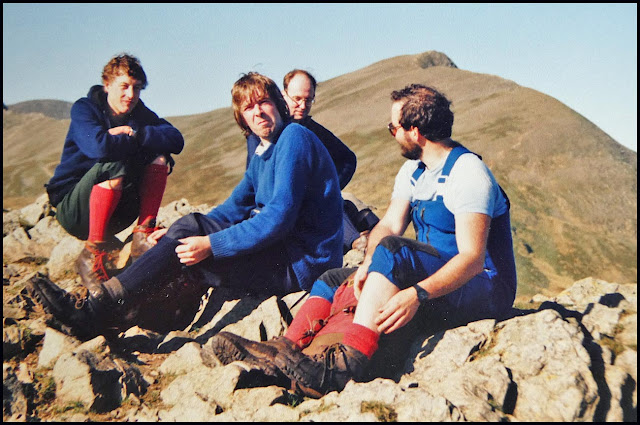 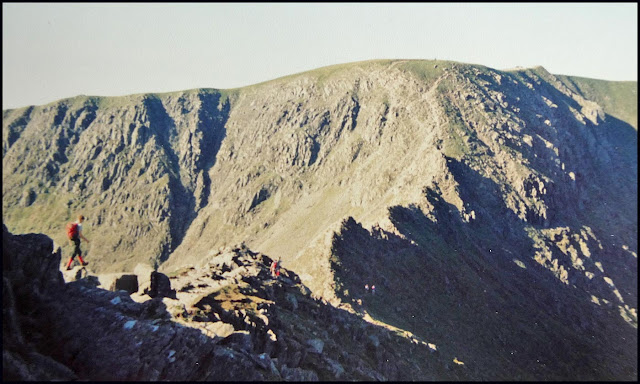 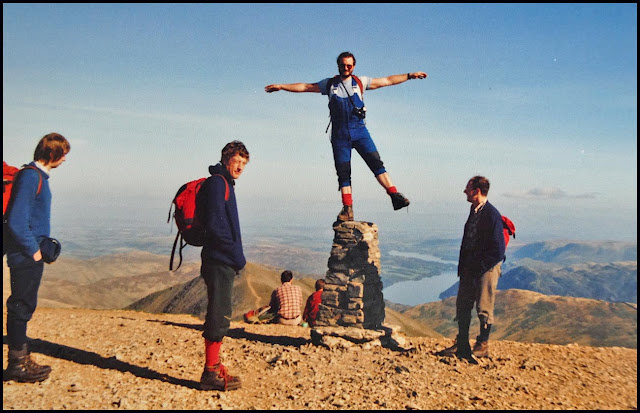 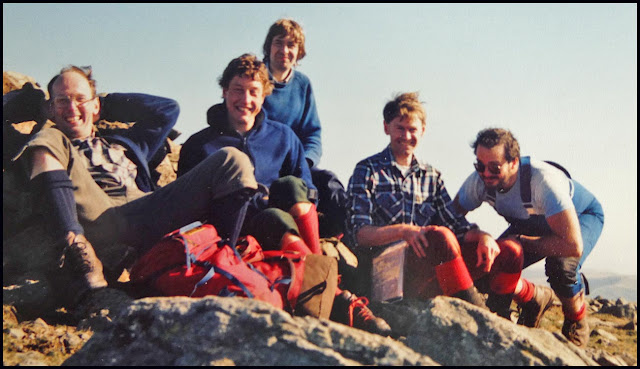 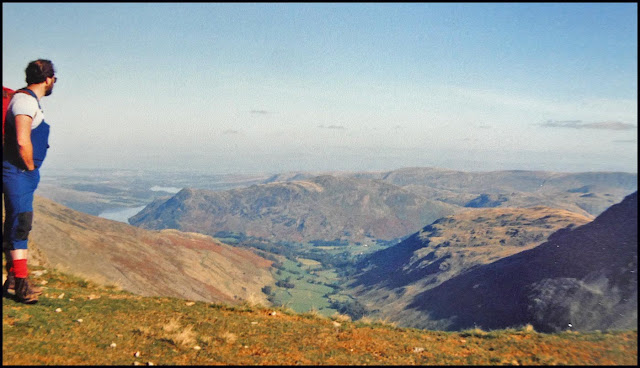 Down to Grisedale Tarn for a lengthy break and observation of:
1. dogs which wouldn't cross the stream and had to be carried;
2. knackered noisy Geordies. 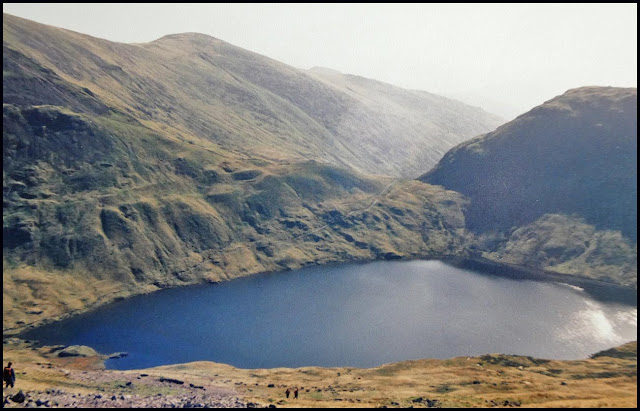 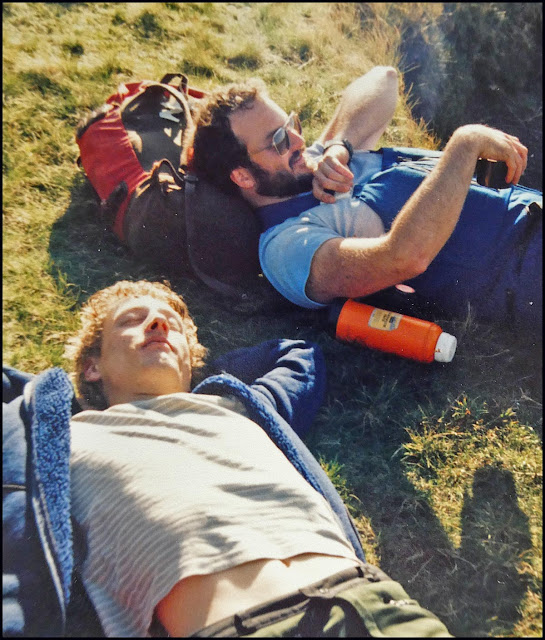 Looking back, from near Grisedale Tarn 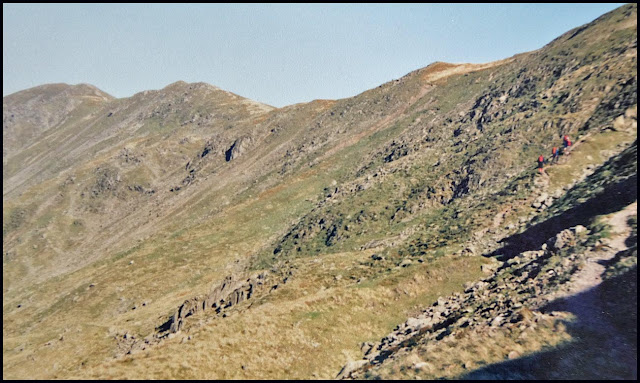 On along a contouring path to the ridge north of Cofa Pike.

Martin lost the rest. On up Deepdale Hause to the summit of St Sunday Crag. Lots of people here, as everywhere, all day, due to superb weather.

Another variation: everyone except Dafydd and Martin also went up .

II and JM recommend the pub grub in the Gloucester Arms in Penrith. Everyone ate sausages and beef risotto and stumbled down the track to the Glenridding Hotel for fizzy Websters. 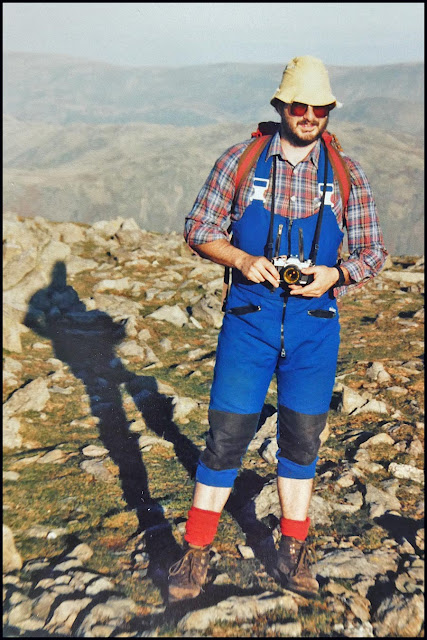 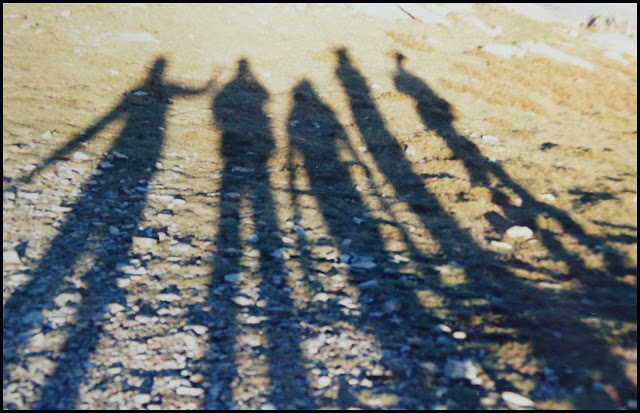 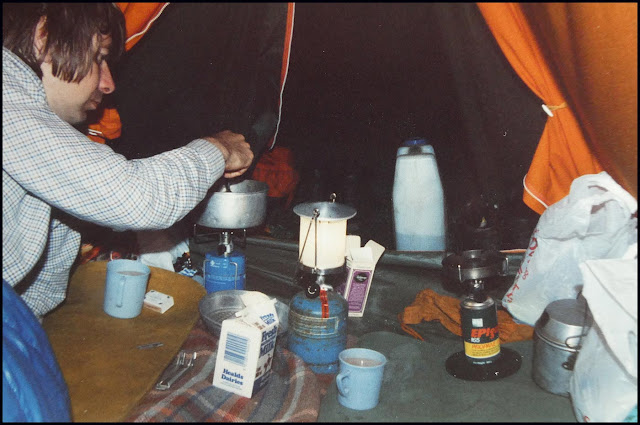 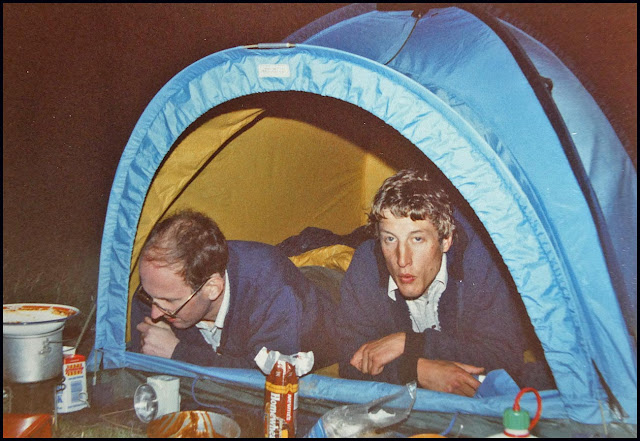 The Knott to Racecourse Hill the hard way

Dafydd gets the weak bladder award (04:00 hrs). Everyone else slept soundly until the sound of primuses and osmotic pressure forces everyone to get up. Decamped and loaded cars. In trying to extricate Martin's motor from the mire. Dafydd says "what gear is it in" trying to be clever. "Reverse" came the reply.
Anyhow, we parked at Hartsop and flogged up to Hayeswater. 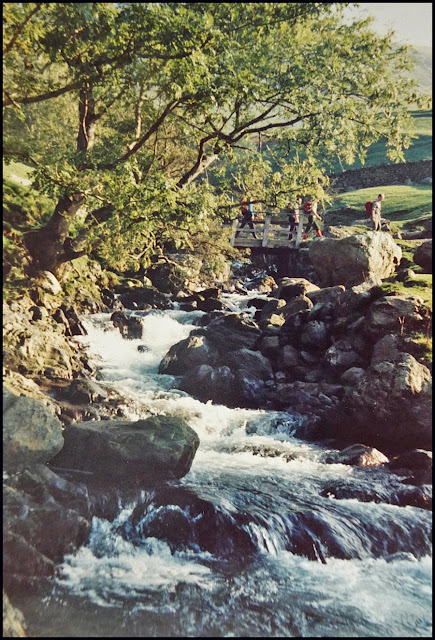 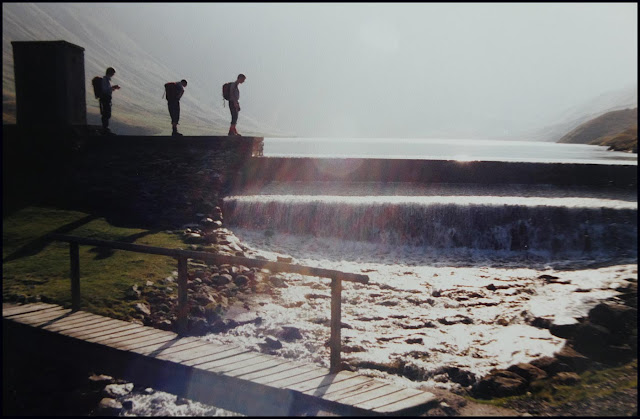 Having warmed up, there was then a severe grind up to The Knott, followed by a discourse from JM on blue wardrobes (IBM - it's being mended) on top of the hill. It transpired that it was a stretcher case and not a mainframe computer. 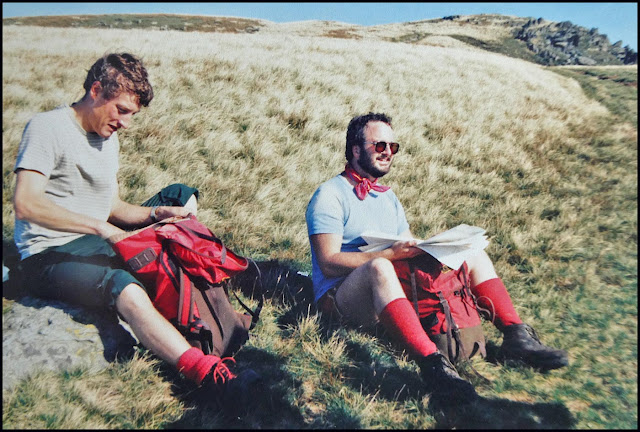 Sensible people would have walked along High Street to Racecourse Hill from here. Nothing that logical would do. Haweswater looked attractive, so we made a traverse of Kidsty Pike to look for the reclusive Golden Eagles. They were hiding very well. We did spot four deer (Roe Deer we think), but no Goldies. 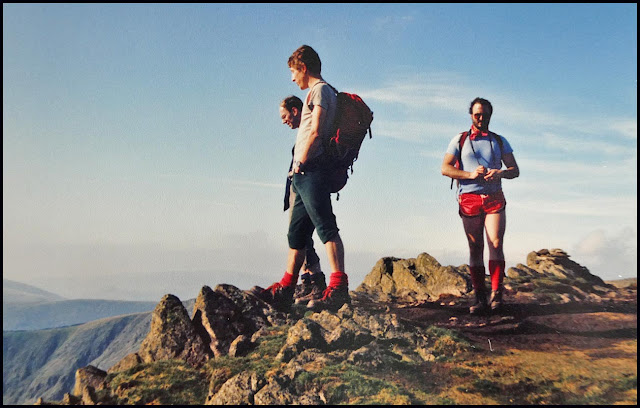 Down to Haweswater. It was delightful to sit in the sun watching Martin trying to take photos of a dilapidated bridge. A delightful spot. 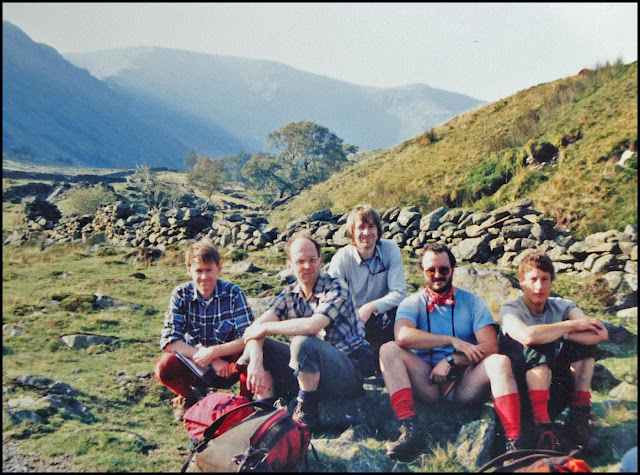 (MB) Continued from the bridge over Riggindale Beck across The Rigg, and headed directly up Heron Crag / Rough Crag and eventually up Long Stile to the summit of High Street (828m). Hazy but fine and warm but not too hot. 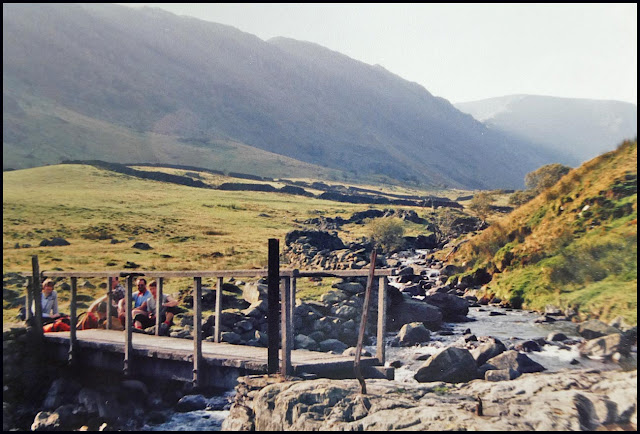 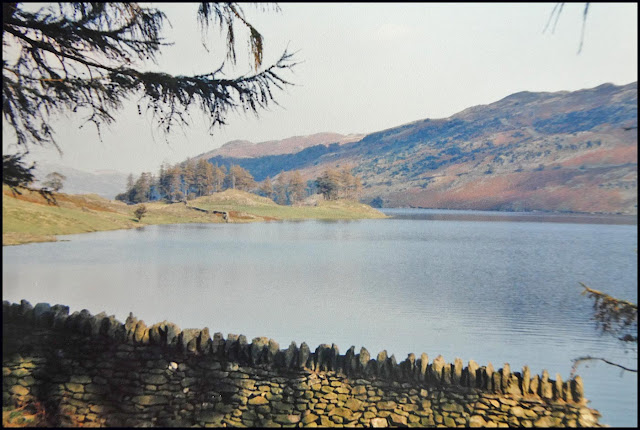 Good view back down the ridge. Lots of cars at the Mardale Beck end of Haweswater - out of proportion with the number of people seen. 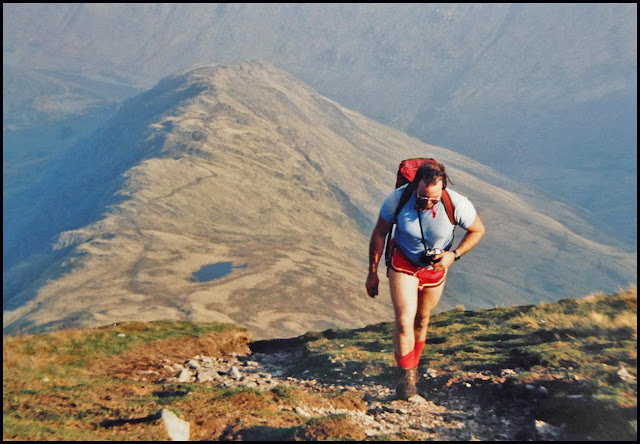 Here's the last photo from the trip - Dafydd in typical pose on the top of High Street. 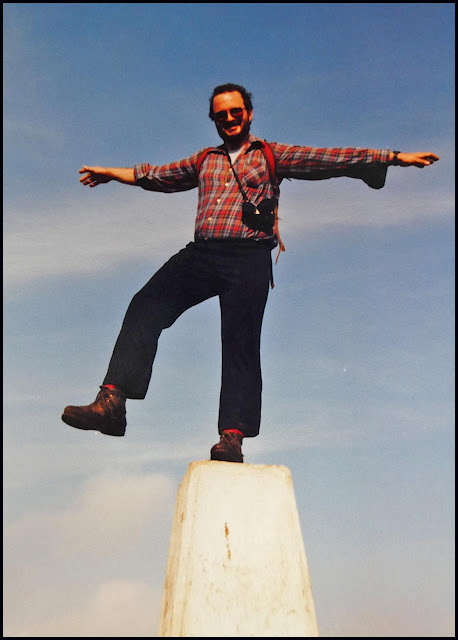 A race against mist on Racecourse Hill was followed by a swift descent to Threshthwaite Mouth and thence down Pasture Beck and back to Hartsop.

Took the Windermere route home and found lots of traffic jams, the longest one caused by a farmer taking several cows for a long hike.

Concluded with an Indian meal at the Asia before Martin went to .

Above is an approximation of both days' routes. The statistics are pretty much identical - 21 km, with about 1300 metres ascent. Click on the image for a better version.

Thanks for the nice memory. Even though I didn't join this trip, I remember the faces, the outfits and the banter :-)