More archive footage today. I'm sorely tempted to repeat this route when possible. Need a good weather forecast though.
15/16 September 1984
September in Snowdonia (Diary by Martin except where indicated)
Friday: John arrives at to cacophony, after initial quietness. Eventually adjourn to the Quadrant at 10:30. All children still up. and Kate look like wasps. Pub very quiet. Gentle route from Blaenau Ffestiniog over Moelwyns and Cnicht is planned.
Saturday: after a brief breakfast. Collected petrol and Dave, and we were on the M56 by soon after 8 am.
Rain and low cloud by the time we reached , but bright weather had been seen in the west. Good views with shafts of light against the black sky. Moel Siabod's slopes seem pleasantly lit from some distance, through the gloom.
Left at Betws-y-Coed and soon we are in the main car park at Blaenau Ffestiniog (pictured above).

Got going leisurely, and Dave failed to buy a water container, having failed to find his old one in a recent extensive search of his possessions. He later realises that this failure is probably due to the fact that he threw away the said item in either Zermatt or .
Tea in a noisy cafe, then we set out past a puffing billy down a pleasant path in the wrong direction (by Afon Bowydd). Past a sewage works we turn right towards Blaenau again. 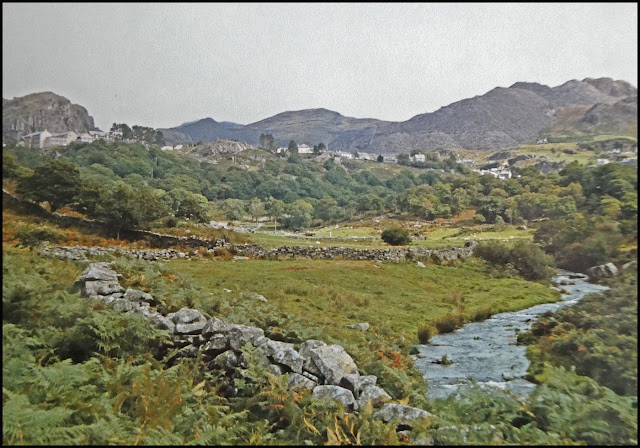 Left at and along the side of a very low (drought comes to ) Tanygrisiau Reservoir.
Stop for brew by disused quarry and Dave's new Epigas Propane mix rocket fuel works magically. He even used some hot water to clean his teeth. (There is no record of who acted as porter for Dave's water, given his lack of water bottle.)
A bumblebee tried to drink my tea and died.
Tested self-timer on camera and had second cups of tea. 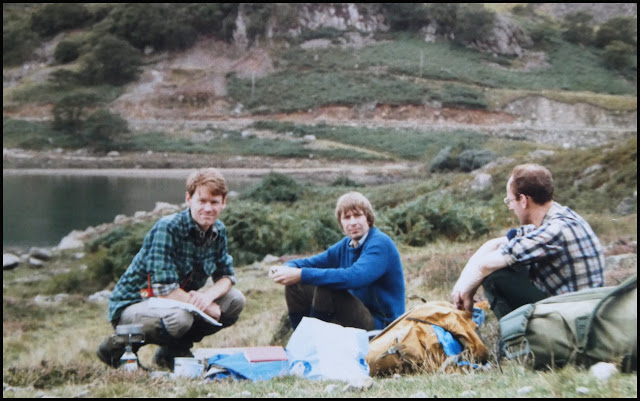 Off to cross the railway and John is nearly mown down as 'Blanche' chuffs out of the tunnel. I failed to get a spectacular photo as I'd left the self-timer on! 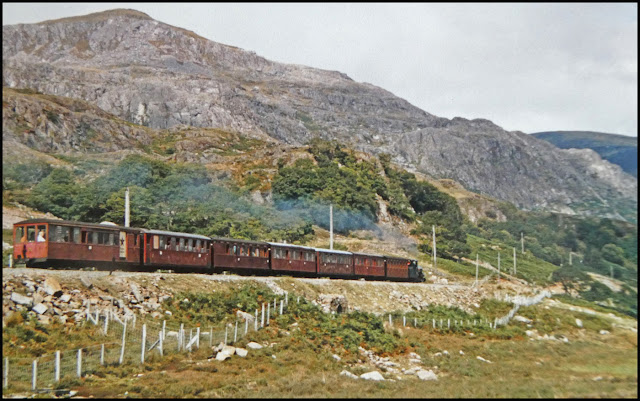 We all admired Dave Scruby's Pentax (DSP) and its fancy complicated zoom lens. He got it out for the first time in public but missed a shot of the train.
Two hours took us to the summit of Moelwyn Bach (2334') after some interesting crags and mild scrambling. John objected to the grass. 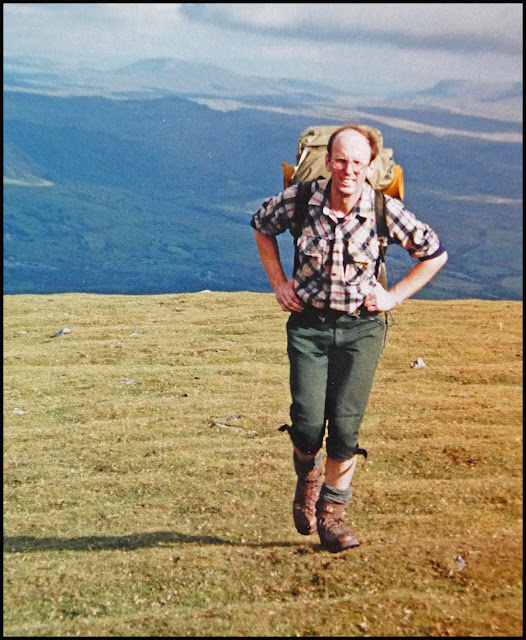 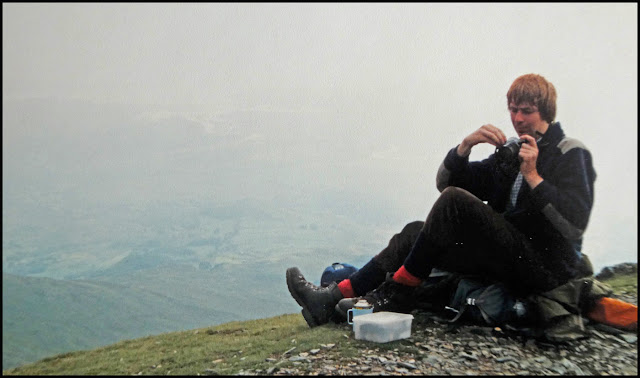 The weather throughout is hot and sunny. Rather humid.
Shaley (slatey) descent to the col at Bwlch Stwlan and John goes to look for water. See the first people of the day. These hills are very quiet.
Virtually windless, but there is cloud on the higher peaks, so we admire today's choice of route.
On the way so far, the very pretty yellow and red of Gorse and Bell Heather. Also lots of Ling and Tormentil, plus Saxifrage (a small white one) and Milkwort. Carrion crows and Skylarks.
John arrives back exhausted from fetching the water. We'd better use it before we find some more. I wonder whether Dave needs to clean his teeth again.
The 600' climb up Moelwyn Mawr (2527')  was straightforward - path up the crag then grassy slope to the trig point. Met some people on the top. Brewed up but mine was destroyed by the vast number of small flies. Having also scalded myself, I was still thirsty and John's supplies had been abortively used.
Cloud level now almost down to us, so we hastened down before the anticipated rain.
Descended the northern ridge and followed a path to the ruins of a quarry at Bwlch Cwmorthin. 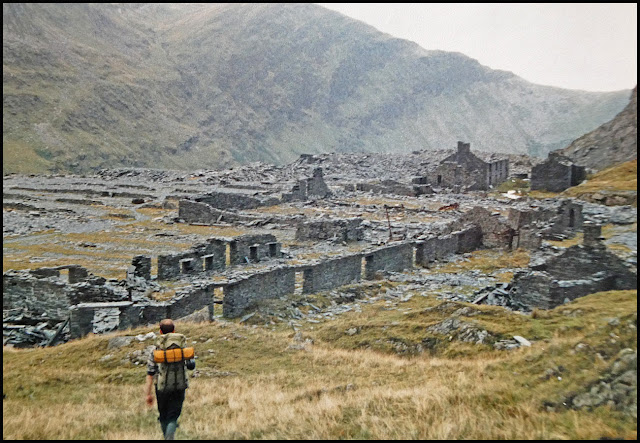 Continued north until an idyllic campsite presented itself at the waterfalls below Clogwyn Brith - 1700 ft. 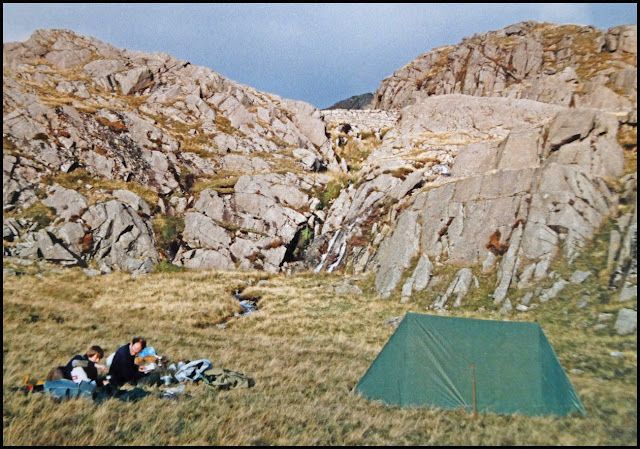 The clouds had cleared and it was warm and still and sunny, with no flies. Magnificent conditions. Relaxed around the site, at which we arrived around 5:30. Brewed and cooked. 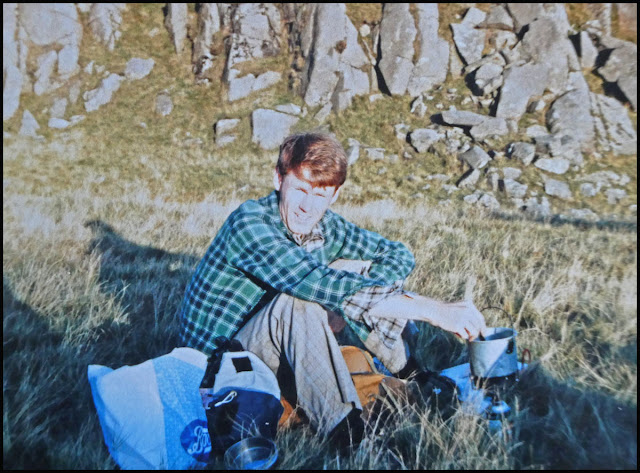 The sun went down. Meanwhile about 20 people descended from Cnicht and proceeded to camp/bivvi down at the ruined quarry.
Most clouds disappeared and condensation started (mapcase, camera, etc). Still quite warm.
My tea fell over but I caught it! Time to stop writing and concentrate on cooking - the crispy noodles need close attention. Meanwhile some very tasty crispy croutons, delight of Phileas Fogg and made in Consett*, were handed around. I finished my tea in the tent and didn't witness the delicacies consumed by the others, as they didn't enter the tent until around 7:30#. I suspect Dave had a sausage*², whilst John had soup and a Vesta*³ curry. 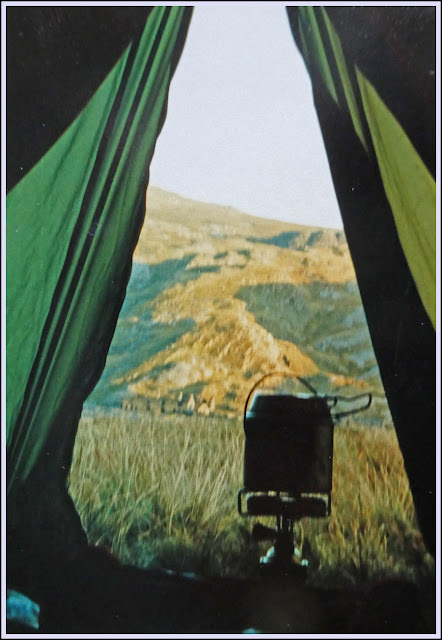 Just a brief note on how to get off Moelwyn Bach in the mist. (The path is vaguely cairned.) Head SE from the pile of stones for about 100 yards, then go down a slatey path on the gentle slope between the two sets of crags marked to the east of the pile of stones.
All in bed by 8:30, probably also asleep by then. Can still see the glow of the bivviers' camp fire in the ruined quarry below.
Lots of ladybirds in the campsite area.
Sunday (diary started by John)
Insomnia strikes at 7:25. Banfield brews for all (Ѷ as we mathematicians write - I can't find the correct symbol here!). Second brew (coffee) at 8:45.
The mist is clearing nicely. The bivviers below are milling around nicely. Scruby does not feel like a sausage (more like a beef burger). Ascent of Cnicht is planned.
Start for Cnicht at 9:45. 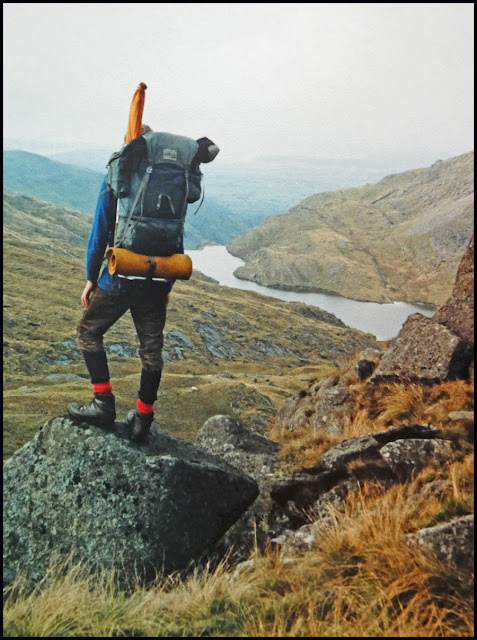 Above and below are views to Llyn Cwm-y-foel and the coast, from the ascent of Cnicht. 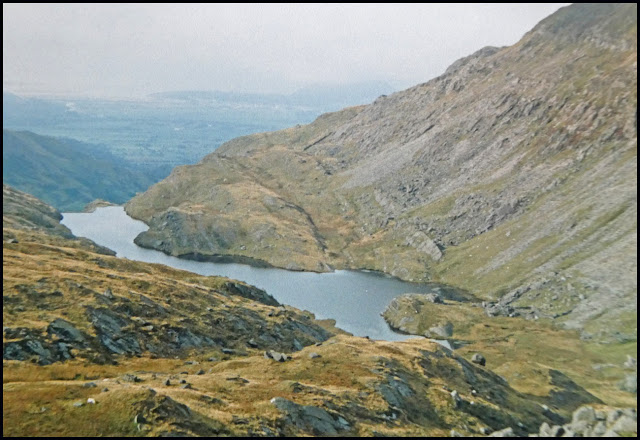 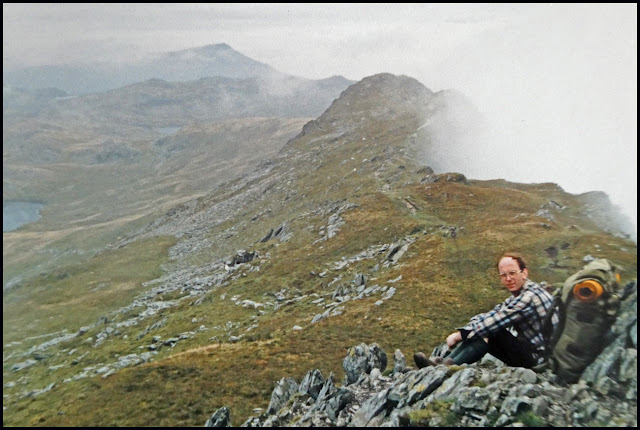 On the way down, we reach something which would be interesting when wet (a descent). 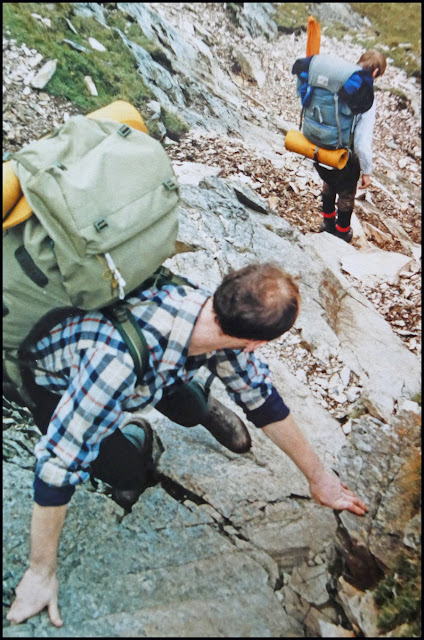 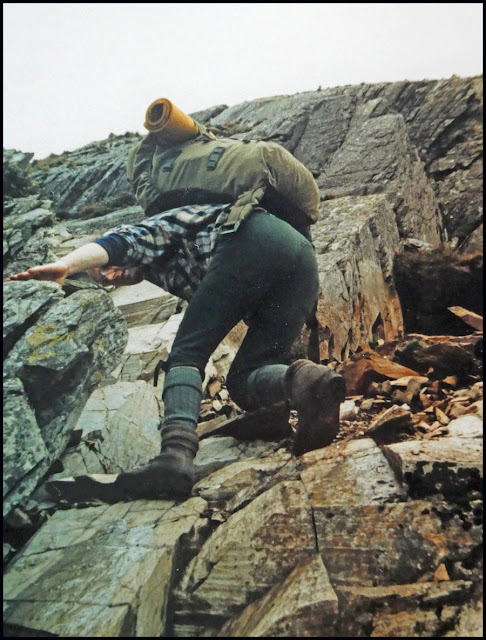 We reach the first pasture land (walls, grass, wire, sheep, etc) at 11:45. At Croesor 12:15. Brew stop at 12:20. There is not much wind today, but plenty of cloud around the ridge of Cnicht. was visible from time to time, with the summit above a stratum of cloud. 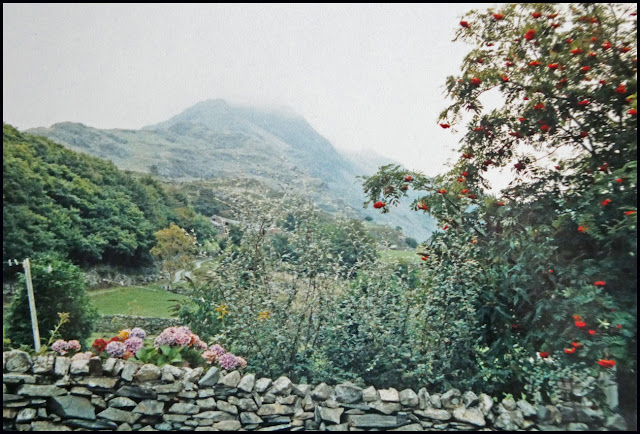 (continued by Martin)
On down pleasant lane with no traffic, to Tan-y-bwlch Station. Waited to photograph Blanche again (successfully this time) then strolled through pleasant woods etc past Dduallt to Dduallt Station. 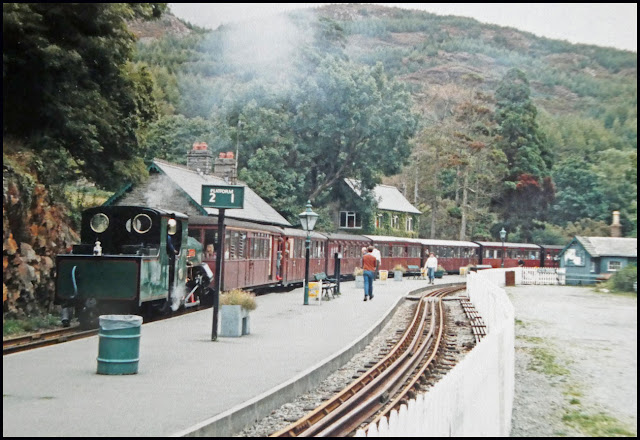 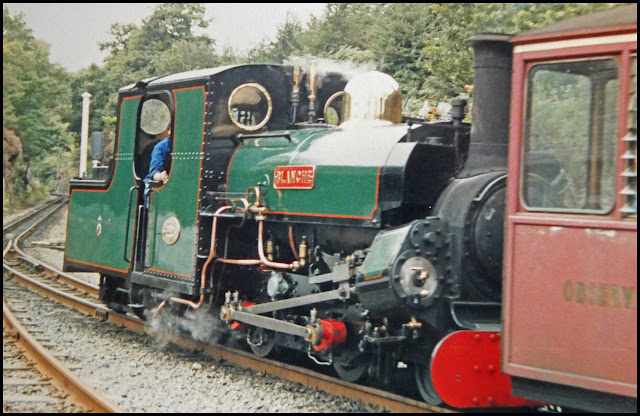 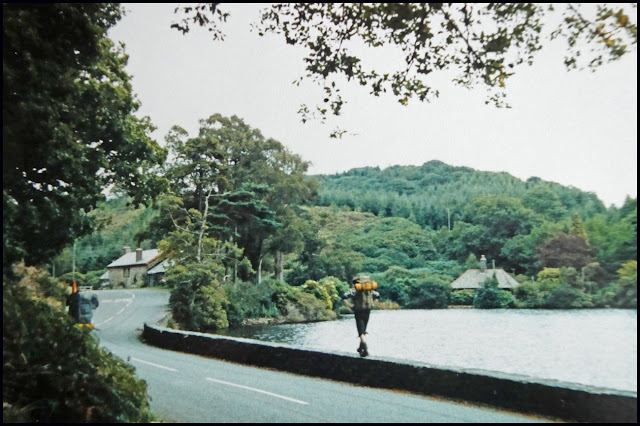 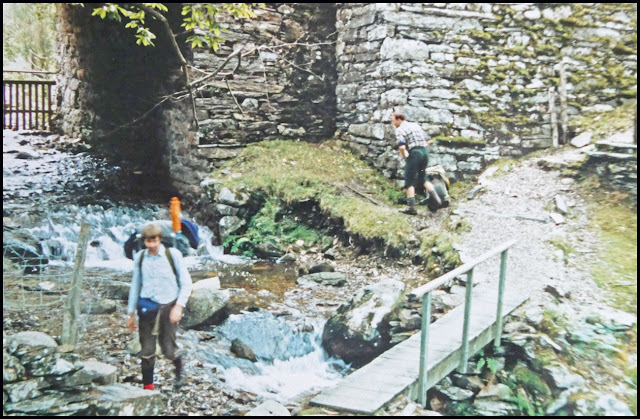 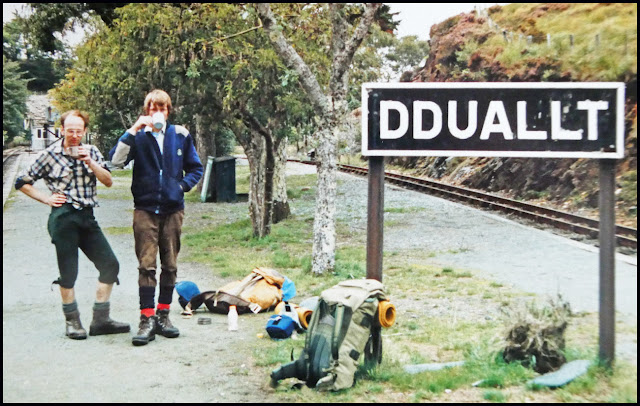 Waited for Blanche's return from Porthmadog and encountered first rain of the weekend. Brewed up in the rain. A delicious nectarious cup before the return to civilization. 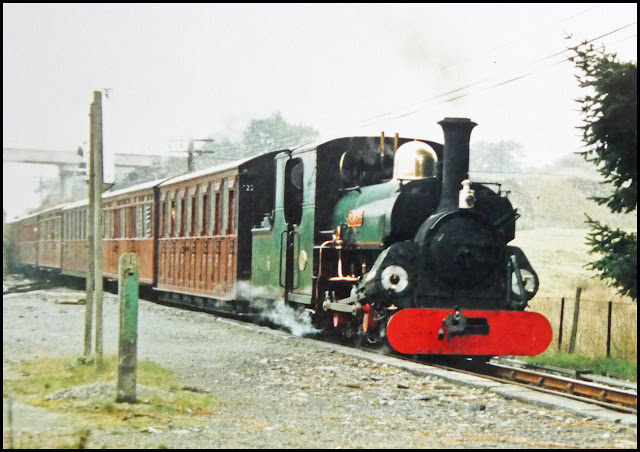 Got on crowded train and peered through windows which were surprisingly free of steam. Our route across Tanygrisiau Reservoir was now completely under water, the level having risen by 1 to 2 feet overnight despite no rain! 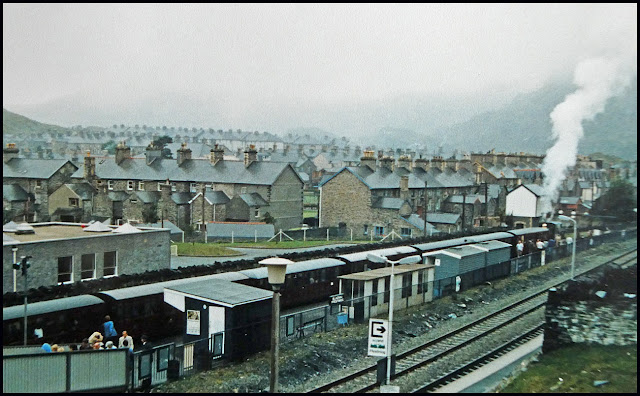 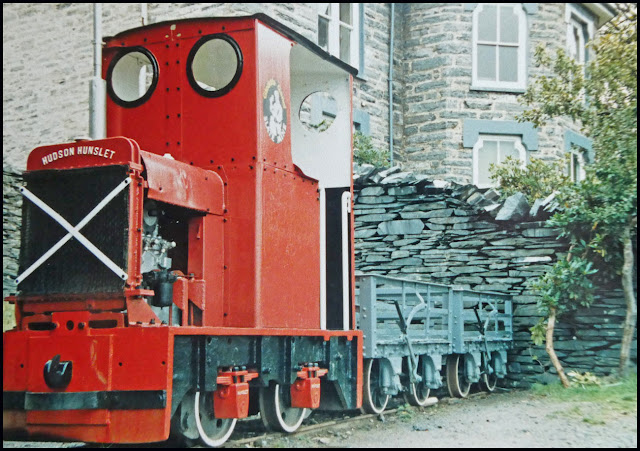 Heavy traffic back to but John caught his 7 o'clock train despite not managing to finish his diary entry.
* Phileas Fogg was set up by some friends of our walking pal Paul Brunn (RIP), using grants available for new businesses in places where coal mines had closed. It was a very successful venture. They eventually sold out to United Biscuits.
# This was in the days before we all had individual one man tents (I did have a Karrimor Marathon tent), and my Vango Mk4 got lots of use. It was eventually replaced by a North Face VE25, another superb tent.
*² meat balls
*³ Vesta products were a staple backpacking main course in those days. I favoured the chow mein with crispy noodles that needed a bit extra butter or oil for cooking.
Here's our route - 25 km with 1400 metres ascent. 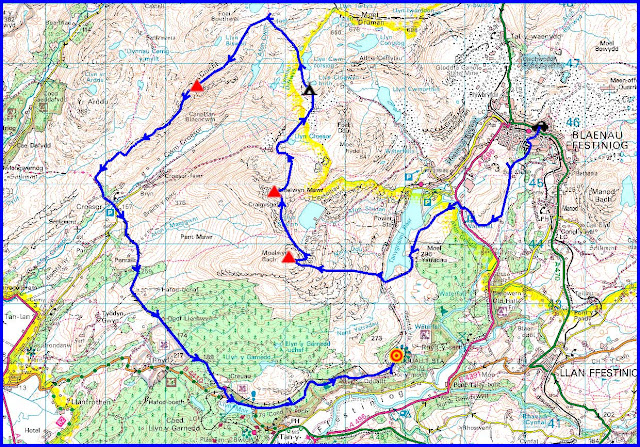