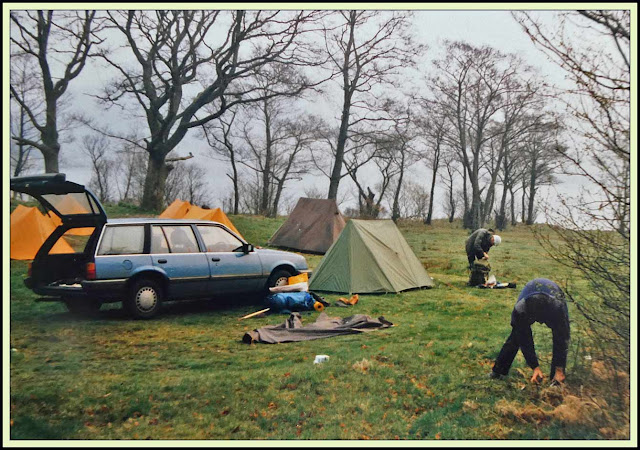 Here's another entry from days past, coincidentally with the same participants as the recent 'Pilgrimage to Portree' in 1994. I've added a few comments in blue.
The Radioactive Ramble
Friday 2 May 1986 (Author MW)

Owing to Greater Manchester transport I was a paltry 10 minutes late at the Rising Sun. ( - rendezvous point for weekend trips)

Notwithstanding this,I was later blamed for causing John to wait almost a whole hour for us to pick him up at . Spring has only really just broken in - the last couple of days have been fine. Today has been fair, but a little 'close' and indeed soon out of we hit rain and then drive into a thunderstorm which comprised one or two flashes of lightning.

Dave (SG) (I think SG probably means 'Senior Gaffer' - Dave was employed in a senior role at CWS) has started off on the wrong foot and is anxiously burbling that he has only 16 shots left and no more film. We stop at Forton to allow him to discharge his frenzy by hunting around the shop for a film but it is to no avail. Will his anxiety increase as the trip progresses, or will it be assuaged, we shall see?

As we left the news was that the radioactive cloud from was just about reaching the South of England, so at least we are going in the right direction, but it may well catch up with us in the next two days, hence the name of this trip.

We arrived at station at 8:30 to find John nonchalantly leaning against the wall. As we drew near, he walked off in the opposite direction, but soon realised his mistake. All aboard, then it was a short trip to the Little Chef feeding ground renowned for its pancakes.

After a marathon effort by MB we arrived at Ardlui campsite 12:05 am. Thankfully not raining as we deploy tents in the dark with only one torch between us. (Supplied by SG.)

MW is very annoyed as he put his ice axe through his flysheet - causing a sickening ripping sound. Fortunately not in a critical place, and easily mended.

Rather a noisy team on the site tonight. A young lass wandering around with a bottle of wine greeted us thinking we were more of her party. I don't know why people need to shout at each other to have a conversation at this time of night - it's most antisocial. I hope they don't go on for too long.

As we sleep the menacing radioactive cloud draws.....

During the night there is an eerie plaintiff moan that pierces the now peaceful site ... filllmmm....

A spirit in torment.

Postscript (DS) I must record that before he went to sleep MW made horlicks on his primus while the rest of us just crashed out.


We all woke up early in the morning to hear the army next door still talking. Perhaps they talked all night. Martin was about to brew up when it was realised that it was only 6 am.
Back to sleep for another hour. Up fairly quickly. Hurried breakfast. Martin (I was only 10 minutes late) found he had lost his porridge, this leading to a plaintive eerie tormented radioactive moan from his stomach.
After John had gone to find man to pay (he woke him up and got a receipt for April), we set off and soon stopped at Tyndrum. Dave got some film and Martin got some porridge. Martin B was stopped from brewing up and contented himself with sniffing tea bags. 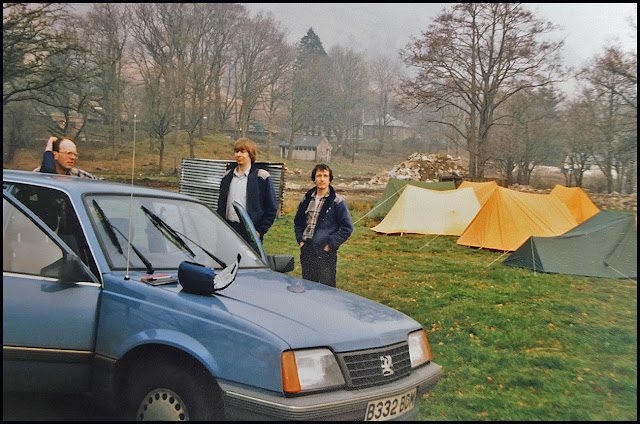 Travelled on to along a most unlikely looking 'A' road (A8005) - single track, no passing places, but a nice surface.

John was packed within 10 seconds of parking the car, but Martin (who had no beard two days ago) did a 'Laurie/Nick Gray' (absent team members who are renowned for their faffing) and spent a long time packing a large looking rucksack. He blames it on his winter sleeping bag.

Set off from forest Lodge, west along Linne nam Beathach and the slow gentle ascent towards Loch Dochard. This walk in was marked by frequent stops and interesting stiles and bridges. Dave (me) made a much photographed mess of going over a very dodgy high stile. John described my crossing as a Right Pig's 'Ear of a Sow'.

Martin W displayed city attitudes in his testing the strength of a suspension bridge (which, unless it has been replaced with an identical bridge, has stood the test of time!) 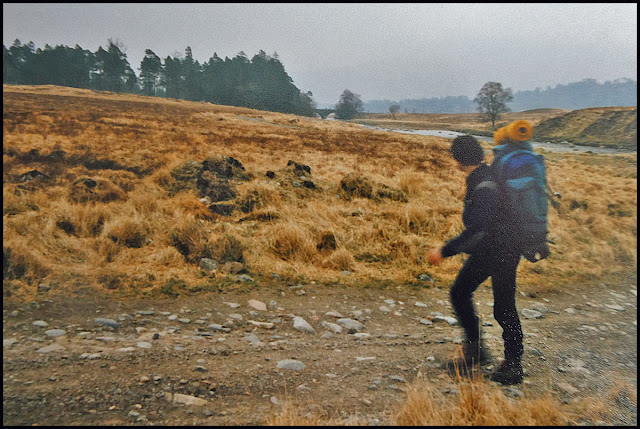 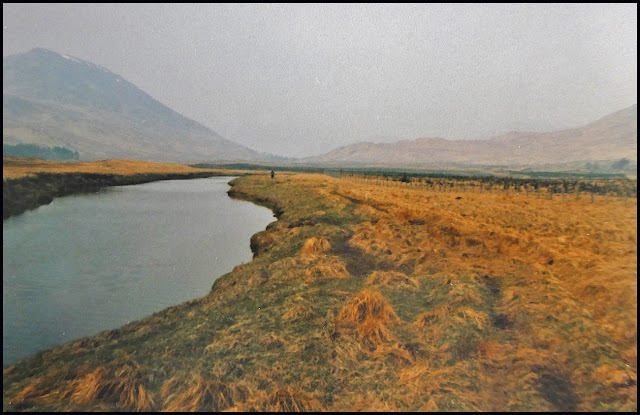 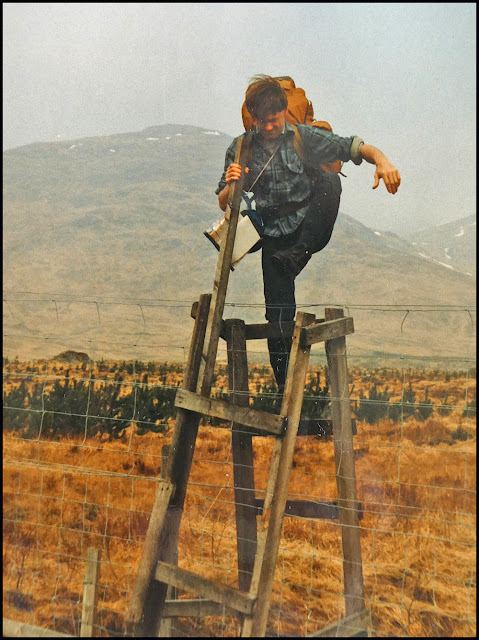 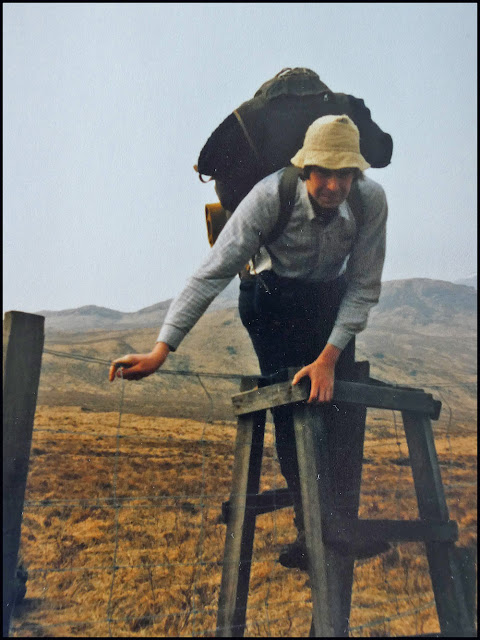 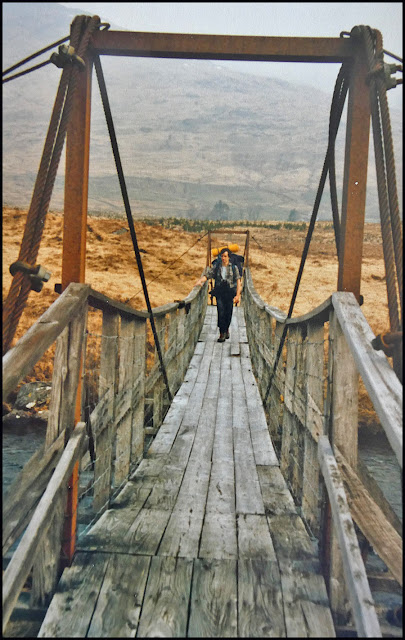 We stopped near Point 289 (on our old map, but not on my current maps - NN 201 411) on the path having left Loch Dochard behind. Martin W was only a paltry 10 minutes behind. His excuse this time being that he had met two day walkers and stopped for a chat. "It's a fine day Laddie, etc, etc..."

The weather has been getting warmer and is muggy, with a gentle east wind at times. Visibility up high is not very good. Brew of tea and much eating.  Two walkers pass. Conversations about news on TV and in newspapers.

Carried on to an amazing suspension bridge which worried most who crossed it yet seemed perfectly ok. Again many photographs. 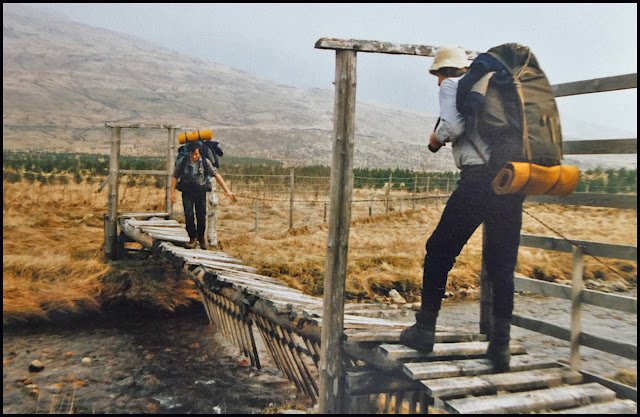 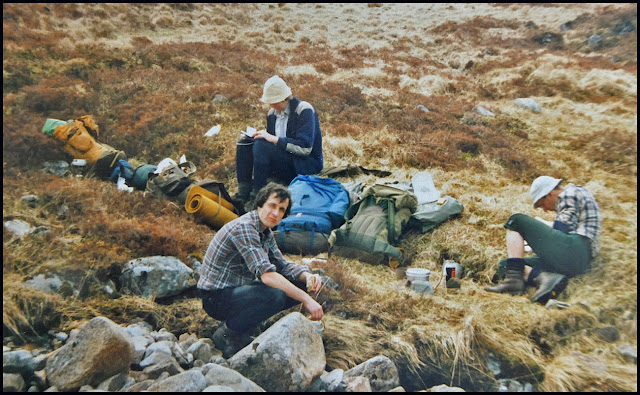 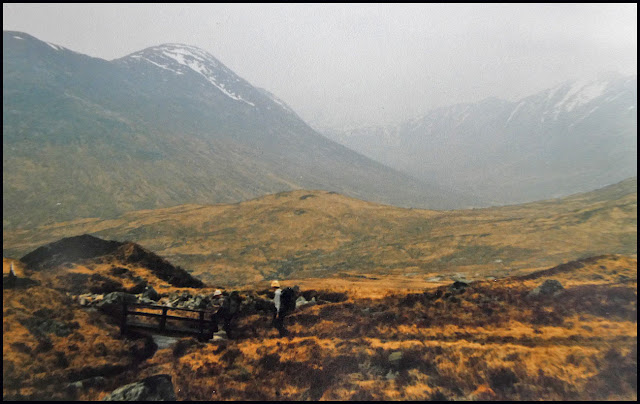 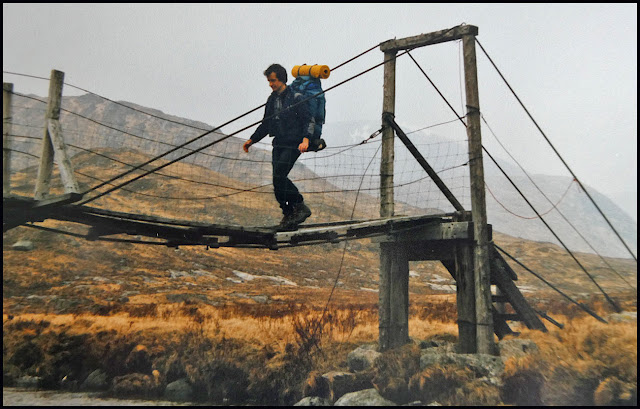 Turned NE up the glen that goes past and to the north of Beinn nan Aighenan (957 metres). That, John says, should be pronounced 'Ainan' (silent gh as in dh). He further stated (authoritatively) that the i before the gh is only there because of the e after the gh. He is now saying that the spelling doesn't conform to the rules. 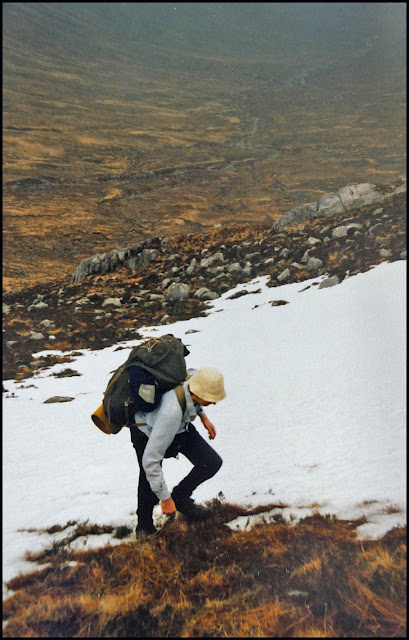 More frequent stops as we contour, gaining height. Eventually John and MW power on and Dave and MB arrive at the col a good though paltry ten minutes after the others (no excuses). There was a sharp climb at the end.

Here we had a quick brew, parked our rucksacks, and walked up Beinn nan Aighenan - the mountain with the badly spelt name. Quickly into the mist, and it began to get slightly damp and windy. Up at the top we had three self-timed group photos, with John not bothering. He was very cold. 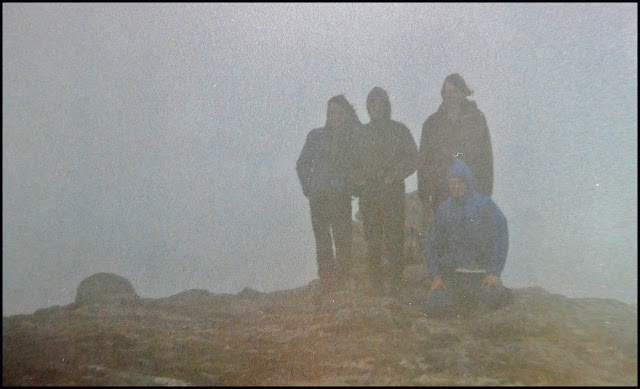 This is the first Munro of the trip. The journey down was excellent. Very quick. We half run down the soft snow most of the way. At the bottom, MB's foresight in wearing gaiters for this peak paid off.

Continued down to find a campsite and found one very quickly. Tents quickly up. John went some way to get us some (safe) water. Very cold on the hands. Slight drizzle began as we put the tents up. Leisurely cooking and eating of meals. 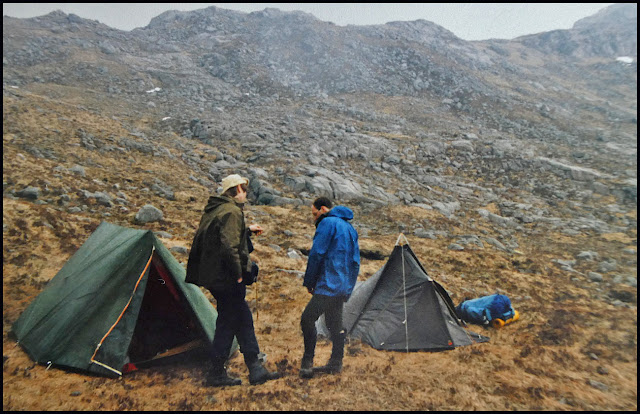 John had corned beef and smash - (again). MB had paella (again). and Dave had beef stew and chocolate mint Angel Delight (with real milk). MW was in his own tent (to escape the farting) so I don't know what he had.* Everyone in bed by 8:30 - knackered. 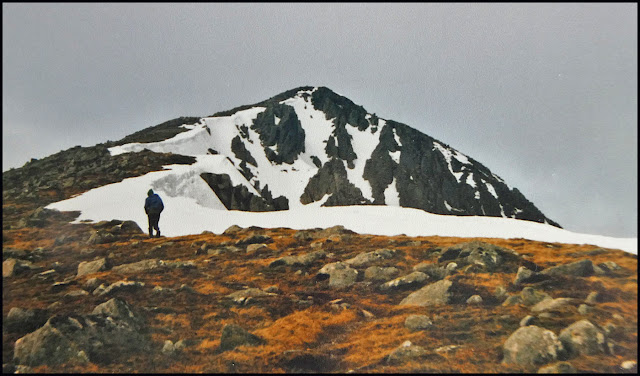 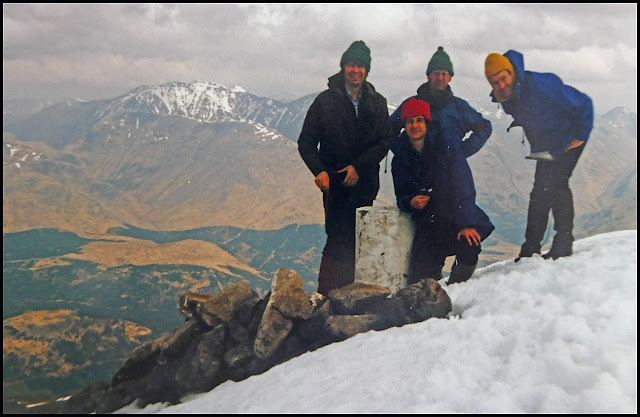 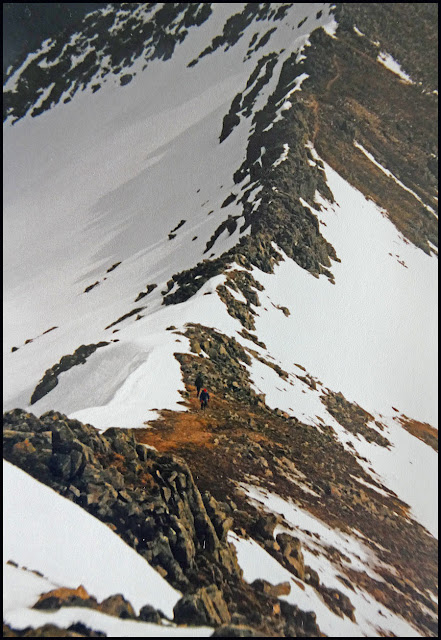 Off via a snow slope, and back at the bealach and our rucksacks at 12:10. For the last 2 hours the cloud has been well above the mountains, and there is some sunshine and a brisk westerly breeze. Pause for lunch.

On Glas Bheinn Mhor at 13:25. Off again at 13:40. Pause for lunch. There seems to be more cloud than sunshine now. Next peak we are aiming for is Stob Coir' an Albannaich, which, from this (windy) bealach, looks like a hard slog. Set out at 14:20. On top 15:05. Weather is still holding. At the bottom, en route for Meall nan Eun, it certainly isn't. 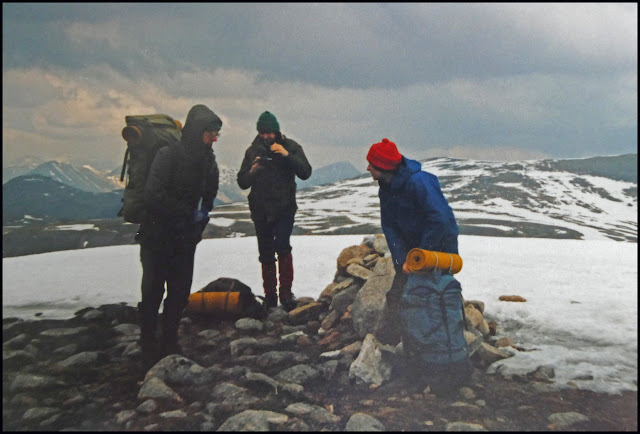 Off the hill by 17:30 to look for a campsite. Pegs in by 18:00. The weather is still quite good, but the breeze is quite brisk.
Clarification: (MB)

1. Dried fruit and custard is not eaten as such. "You soak it and it goes soggy" - MW.

3. "Lunch" is a frequent occurrence throughout the day. It means "ate food".
(MB) Variable weather for rest of the evening.
Smelly tent.
Tussocks.
MW comes for a tea bag party, and makes the tea.
Pleasant gurgle of the river a few feet away should lull us to an early kip with no difficulty. 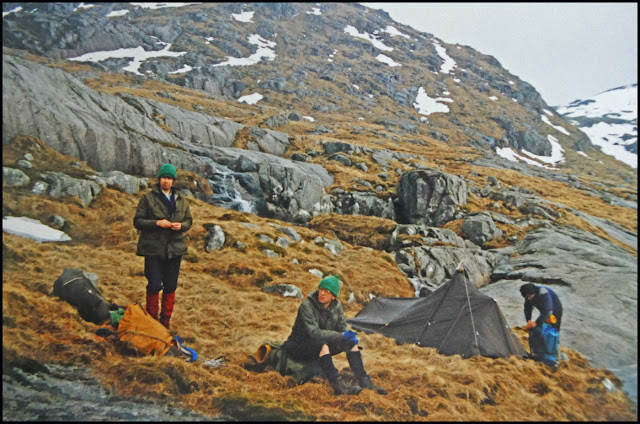 Variable light as early as 8 o'clock. MB's camera bust.
Monday 5 May (MB)
After a bumpy night John brewed up at 7 am and we arose. There is a view today and scraping sounds from next door. John confesses to having had nightmares. Dave combs his hair to demonstrate his application of work attitudes to the trip. A bit of rain and wind in the night.

Off by 8:30. I donned waterproofs to contend with the drizzle but the others didn't don theirs until we reached the end of the initial slog up Meall Odhar (876m).

A tramp along the ridge to Stob a' Bhruaich Leith (940m), and a steady radioactive shower was falling. Not very warm.

Considering the weather, visibility very good, with views towards Glencoe, and cloud level above 3000 feet, although by the top of Stob Ghabhar (1087m) we had entered the cloud. 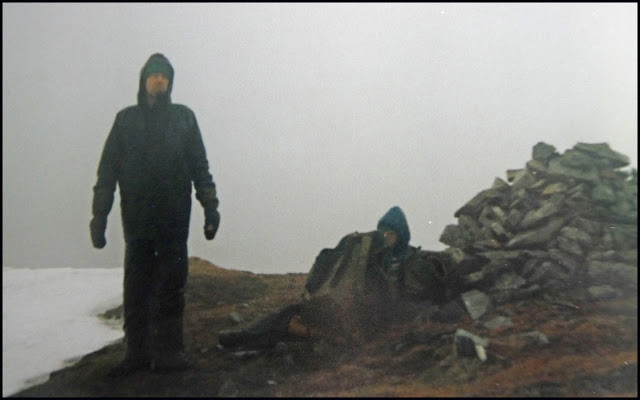 Interesting ridge off this hill, but we didn't risk going over the cornice to maintain height towards Stob a' Choire Odhair, an outlying Munro (really a separate mountain). Instead we came off the nose, which was in itself precipitous, although a gully to the right made it into an easy scramble.

We then contoured round very satisfactorily to a stalkers path for the descent to , by 2 pm, after various 'relief' stops. 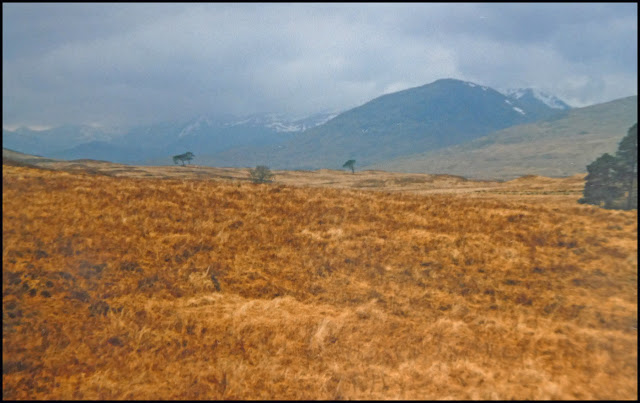 Saw two people on the hills all day, and only about ten the whole weekend. A reasonable tally of six Munros, and an easy journey to get John to , but a traffic jam between Forton and the M61 prevented further speedy progress

Pleasant meal at the for me and Dave. 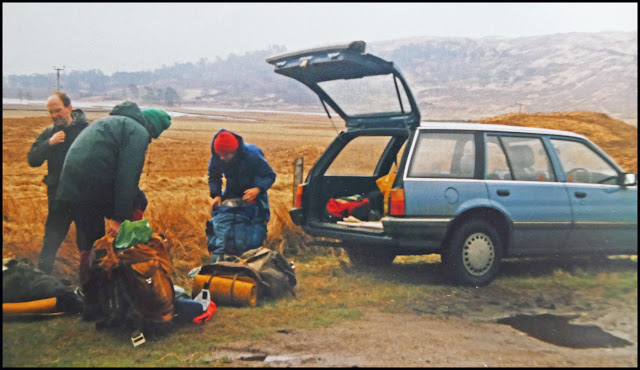 Here's our route - 45 km with about 3000 metres ascent. Click on image for a better version.