Quite a chilly night, but everyone slept well. Dave's alarm went off at 6:30. Cloudy and cool. We leave together around 8:15. Dave, Martin B and John storm off into the distance (and these pictures were taken by that 'advance party'). Laurie and I follow at a more leisurely pace, admiring the fine scenery. Brief stop at Puez Hutte, after only half a mile, for an orange juice. I feel rather slow and tired today, and feel like stopping a lot. The path has a Yorkshire Dales look to it as long as you ignore the scale of the surrounding scenery. In a mist, probably indistinguishable. We get to the pass - Forcella Campaccio - without really trying, since we come down to it. There follows a descent to Lago di Crespeina, quite a large lake. 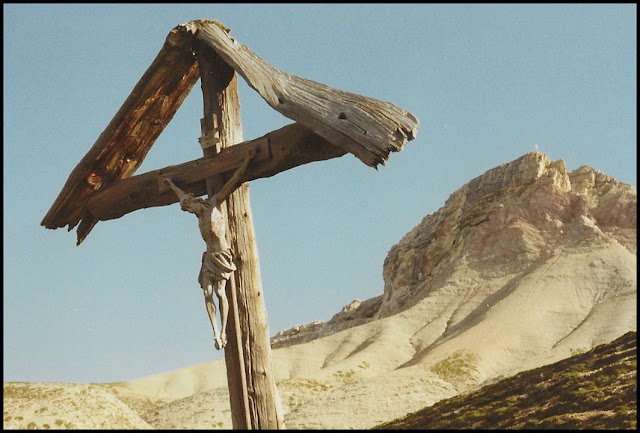 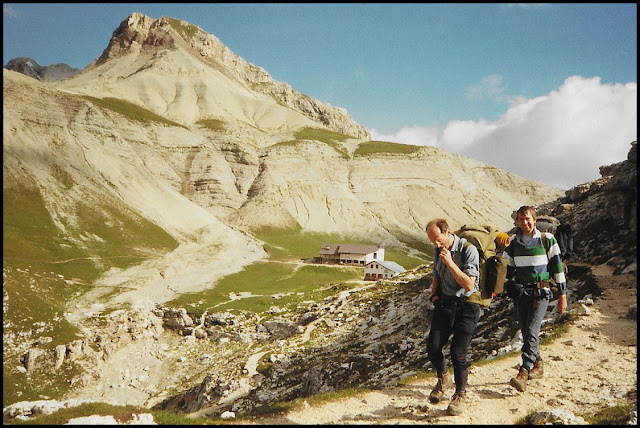 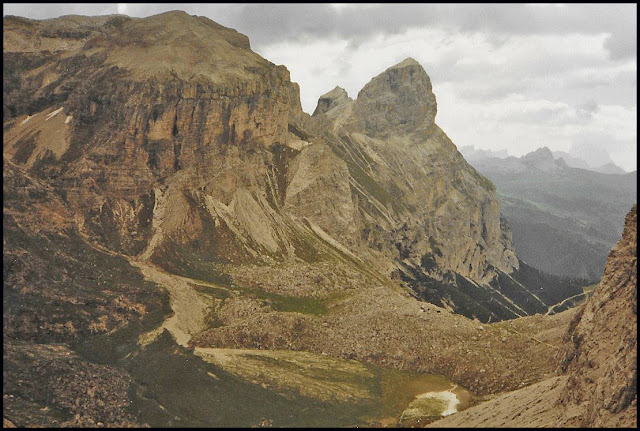 The dynamic trio are having a brew on the pass above the lake - about 10:30. Laurie and I stop for a while to eat before the climb to 2528 metre Crespeina Joch. Not as bad as it looked. 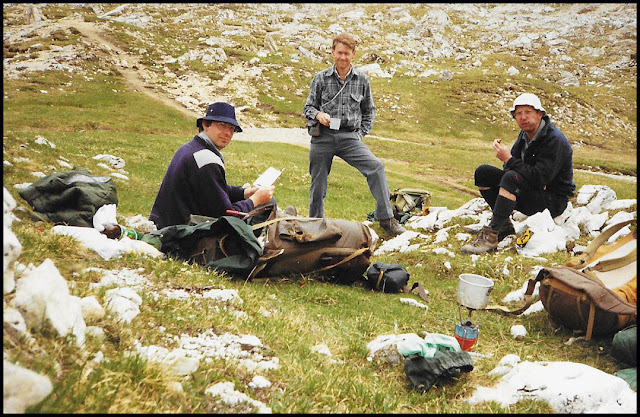 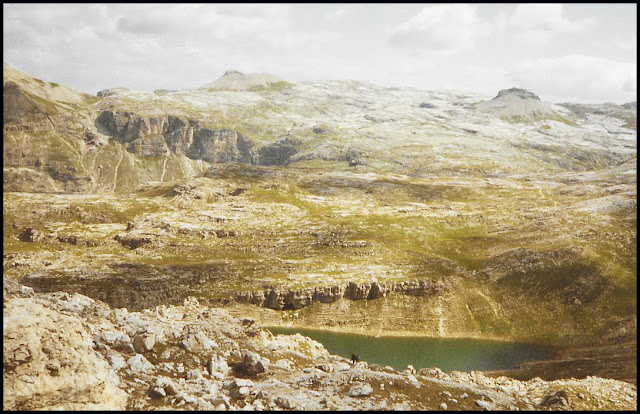 More fabulous views open out down Val Chedul, with Rotspitzen rising at the end looking like The Lost World. 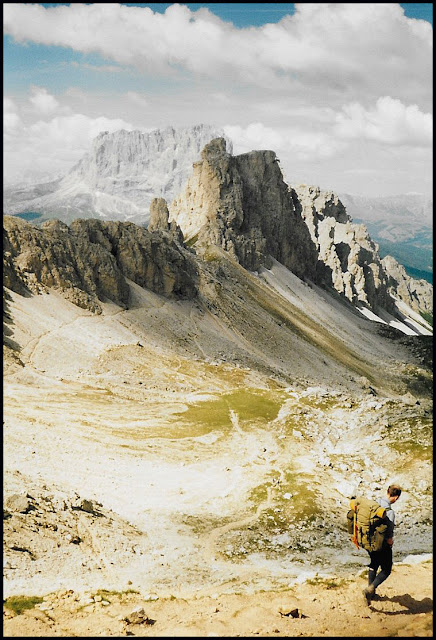 A short descent and short climb take us to Col Turond (2466 metres). 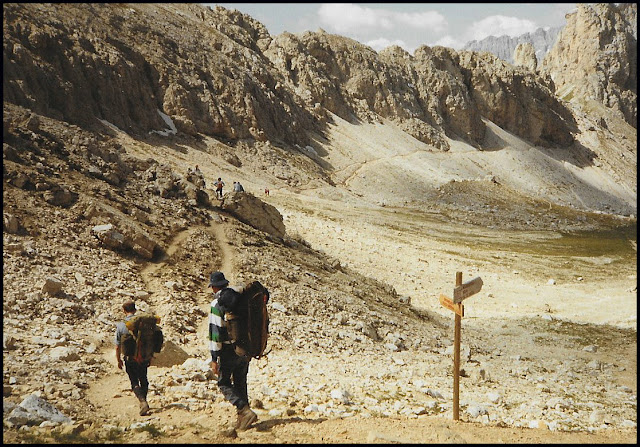 Our view of the road is blocked by magnificent limestone turrets and huge walls of rock amongst which we soon descend, picking our way down over loose paths. 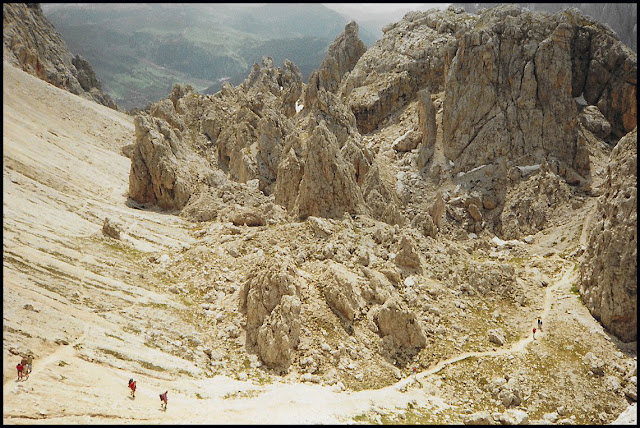 The many tourists are evidence of a nearby road. One has to guess whether someone is Italian or German before saying 'buongiorno' or 'gruss gott'. Do Germans really look put out if you get it wrong? 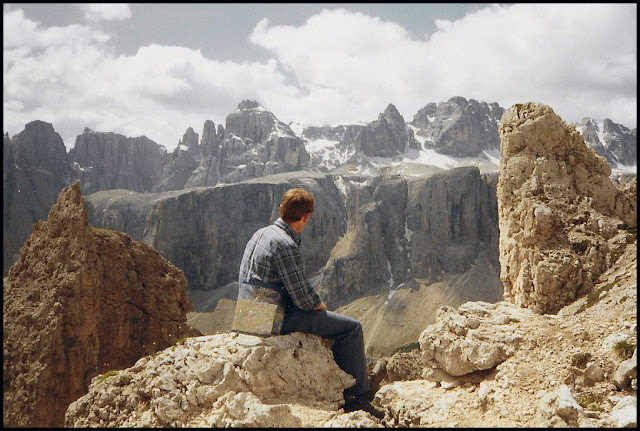 Rifugio Clark (now called Jimmy's Hutte) is quite a pleasant wooden hut doing a roaring trade. I wish we had stayed here for lunch, but after an apple juice we dropped down to Passo Gardena, where we met Dave, John and Martin B at Rifugio Gardena. 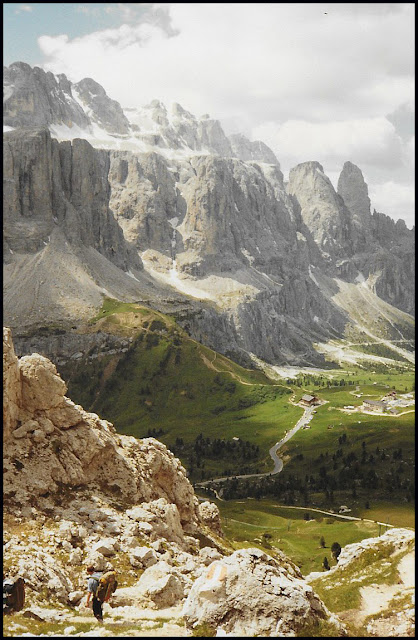 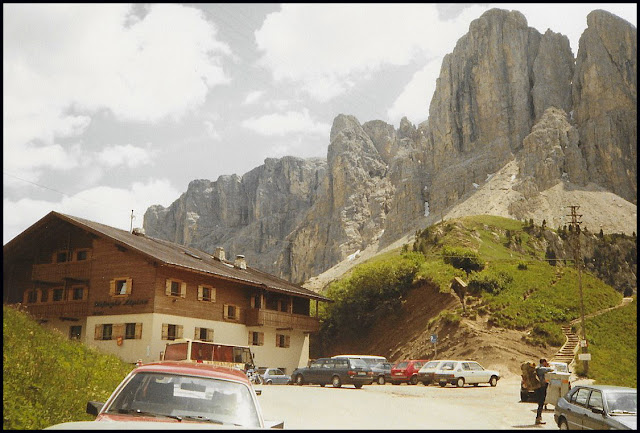 Here, despite asking the apparently English speaking waitress for something without meat in it, I ended up with a macaroni with bolognese sauce. I ate much of the macaroni before leaving the rest to the human dustbin (Dave). I also had to reorder the minestrone that I thought I had ordered the first time -  thankfully relatively devoid of flesh. Meanwhile, Laurie tucked into a large spherical dumpling that rolled around in a plate of soup. Apparently a house speciality. 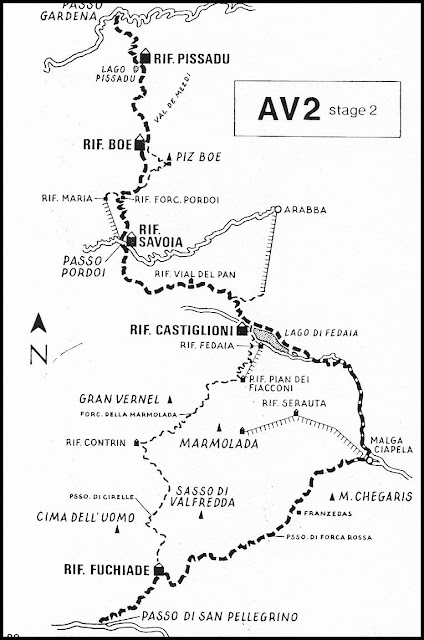 The sun is out when we finally leave at about 1:30, and make our way up towards Val Setus, which is a steep scree covered gully (a bit bigger than what I usually think of as a gully). 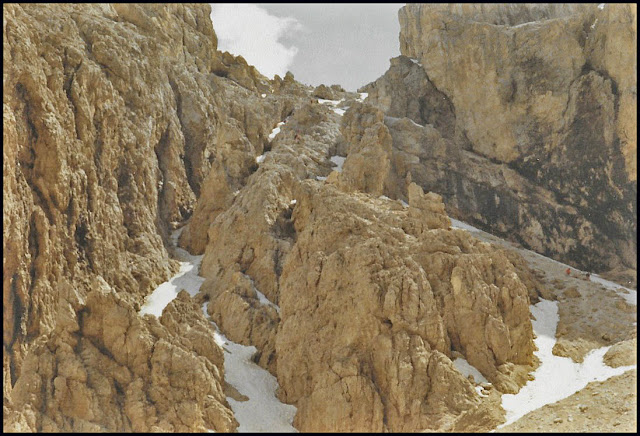 Laurie is really keen to have a look at the via ferrata around the corner (Tridentina - with which I have subsequently become familiar, but I doubt whether the others have done it - Ed) and so we head off along the path towards it. We lose a bit of height and eventually I am not keen to carry on to something we may finally not want to do. Laurie goes a bit further and then comes to a similar conclusion.

So it's back to the foot of Val Setus, and we start the grind up. There are bits of snow here and there, and many people on the way down. About half way there is a serious rumbling sound and looking up we see snow flying and a couple of large rocks making their way down. Laurie becomes quite anxious and we do our best to get as far as we can from their possible landing places. Much noise. Dramatic. When we reach the narrow part of the gully from where the rocks came, we see warning signs - 'Attenzione'. Evidently rock falls are quite common here. We get through the danger area as quickly as possible.

Then it's up a very steep, rather wet, rather screey, slope to a point where aided ascent (fixed steel rope) begins up craggy limestone. 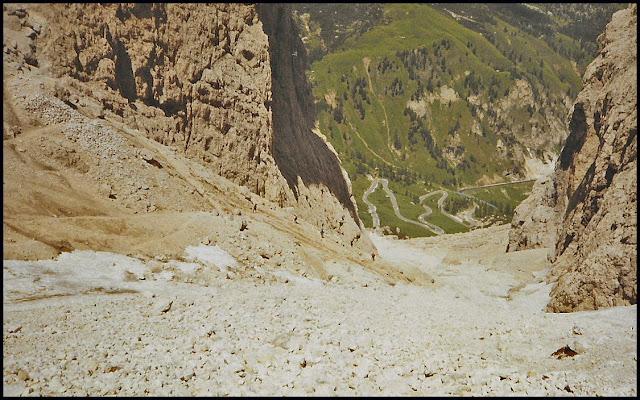 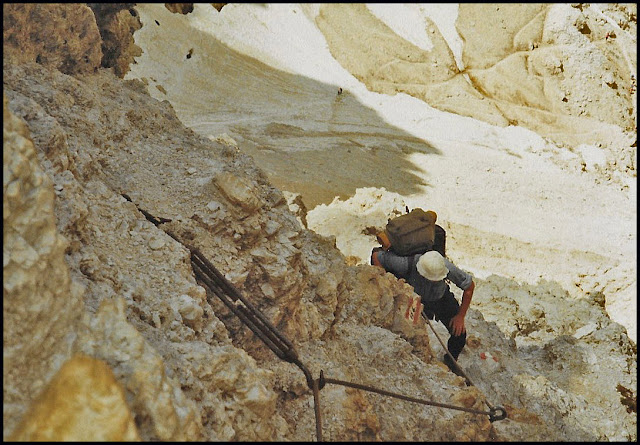 Quite fun, with dramatic views. The rope makes life easy, giving much improved security and showing the way. None of it, I think, would have been too difficult without the rope however. Some very young children coming down, tied carefully to the rope by carabiners, were doing very well. Some others looked not too happy. One man holding a rope tied to his rather large wife was perhaps lulling her into a false sense of security. 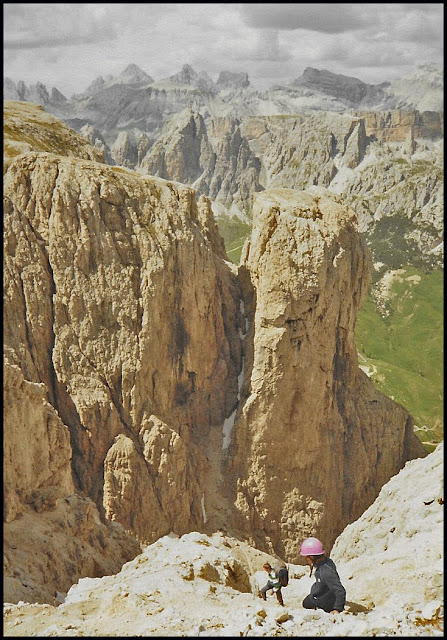 Finally, the summit. Stupendous views; a great spot. Especially knowing that the Pissadu Hutte is only 3 minutes away. Many ego-boosting photos taken before going on to the hut for tea. We discover, from a German/Nordic? couple who have seen them, that the others are camped about half a mile away. 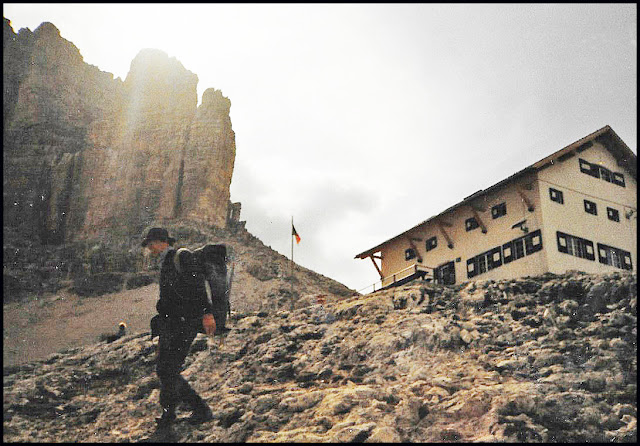 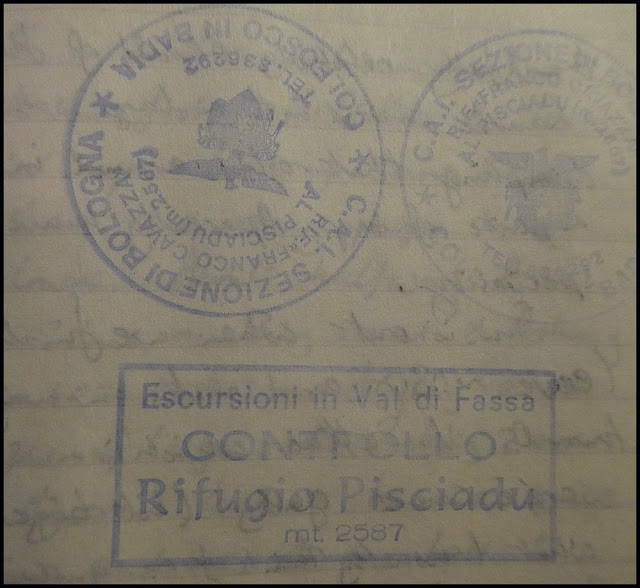 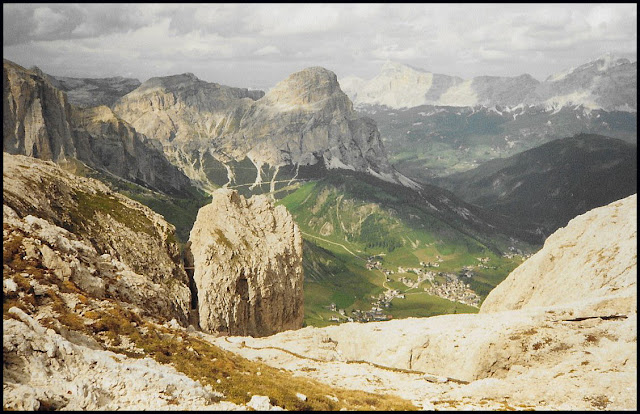 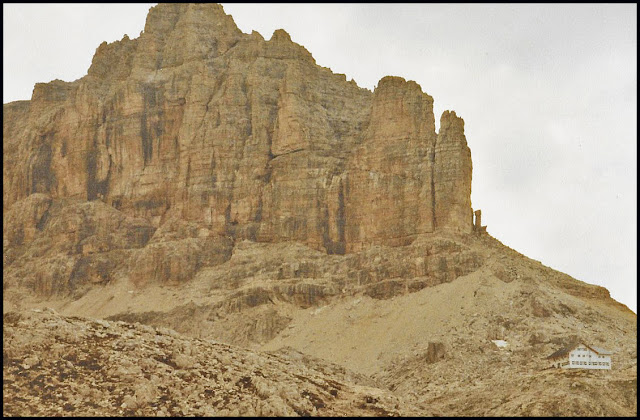 We soon spot Dave in his stripy shirt (very distinctive) on his way for a very cold foot wash. We are camped by about 6:30 in an excellent sheltered spot surrounded by huge rock towers and magnificent distant views of similar structures. Mild enough to cook outside. Beer and coffee in the hut later. 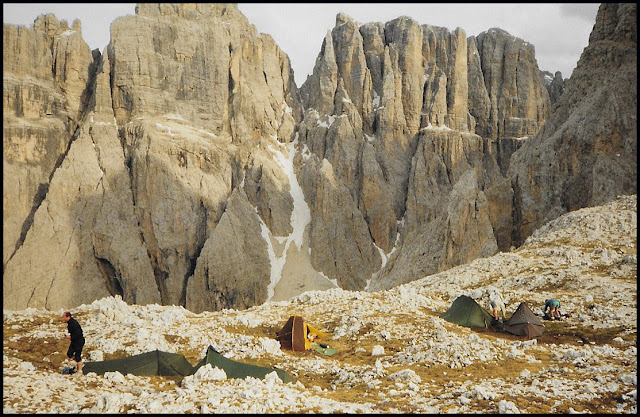 The cruel and sadistic Martin B has planned a long day for tomorrow, with an unexpected early start of 7 am!! Sleep deprivation into the bargain. Dave will give us an early morning call (I dread to think what that might consist of) at 5:45 am.
Here's our route - 11 km, with 850 metres of ascent. 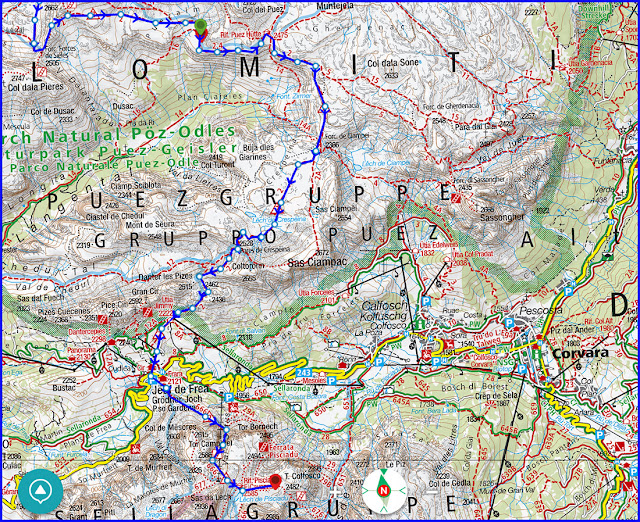 Next Day
Back to the start
Posted by Phreerunner at 16:05