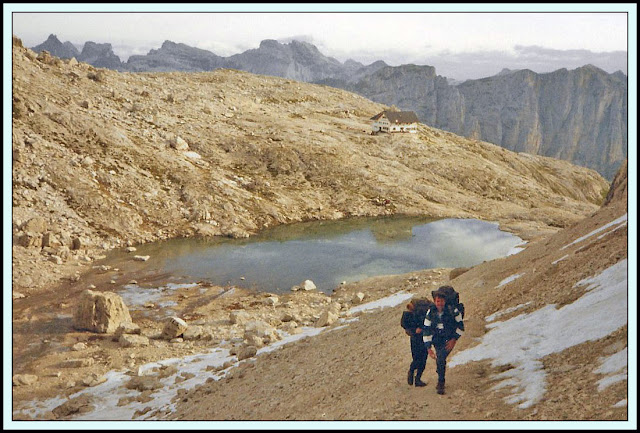 Looking back to Pissadu - how did we find anywhere to camp?!
Tuesday 18 July (Diarist: Laurie)

Seven o'clock start for a long haul today, creeps up unexpectedly on Martin W and me - so it is agreed to meet up later at Passo Pordoi or Malga Ciapela.
[So this entry's photos are from the advance party, not the diarist.]

So we relax a little, take ages to unzip Martin W's gaiter, and leave half an hour after the others. The campsite had been spectacular, with the crags of the Piscadu peak towering above, and the deep Val de Mesdi separating us from other peaks of similar height.

Rock all around, and just a few tiny areas of green for tents; in fact mine was brown, a dried up pond which proved a bit messy.

So, back to Lago di Pissadu, a quick wash in the stream, and up across scree and snow patches under overhanging crags. A short rock and ironware section, then the snow is all around, hard in the morning shade, and our ice axes come out for the first time. The valley climbs into an open basin with an ice stream. ks skirt the basin to a pass opposite, but our red paint marks lead us up and round to the right. 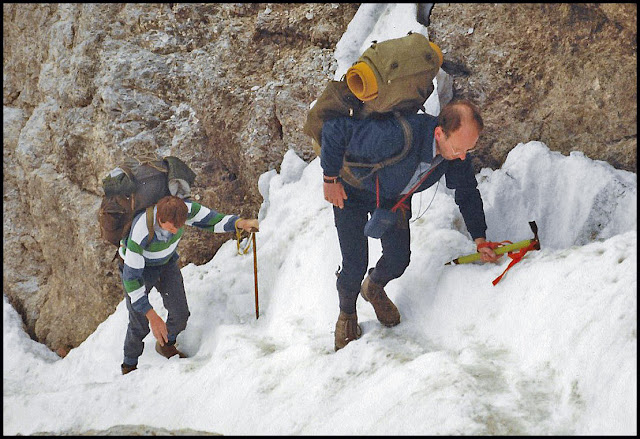 By now, we are in bright sunlight and goggles are essential. 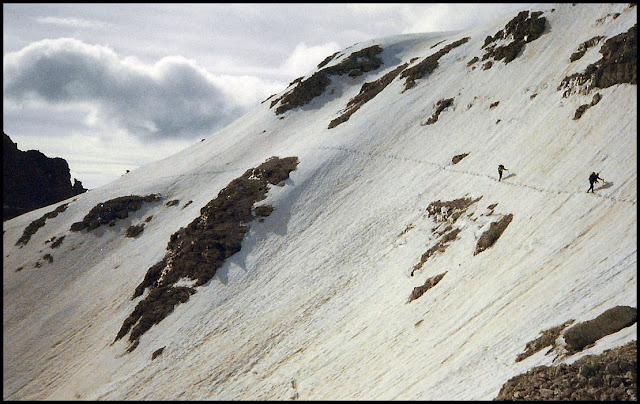 We stop at a summit, where we meet a man with a pipe who asks us to take his picture. The man had given me 100 lire to make up the right money last night in the hut, and the pipe we had smelt on the way up. Other people from the hut (we saw them leave when we were on the scree) caught us up. Immense views of our previous day's route and distant snowy behind, and a plain of bare rock and snow patches ahead. 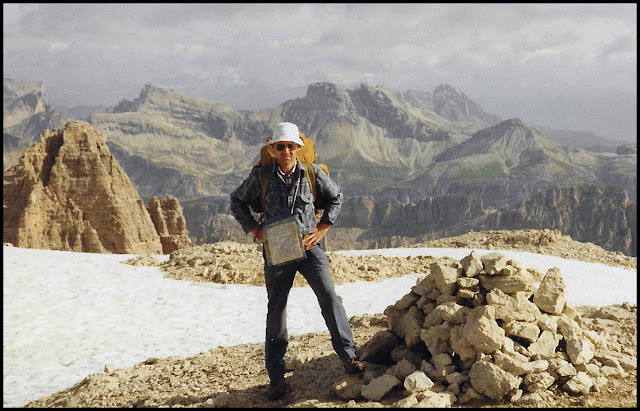 The path undulates through this terrain, then contours a larger bump with an exposed cable section, then goes over a smaller bump to reveal the Rifugio Boe. 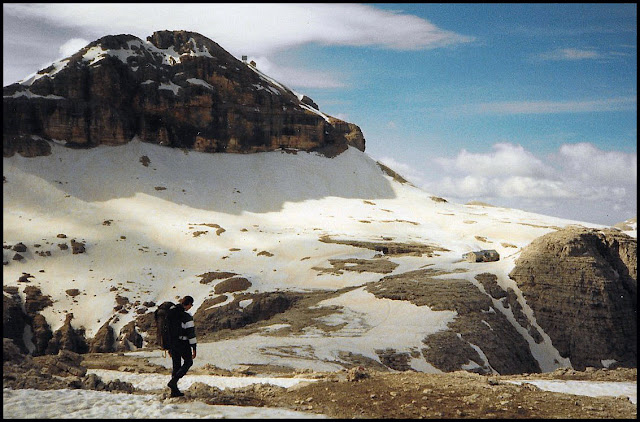 And surprise, surprise there are Dave and John, who had expended some of their early start on an unofficial deviation. Martin B was visible chugging up the snow towards the Piz Boe summit. 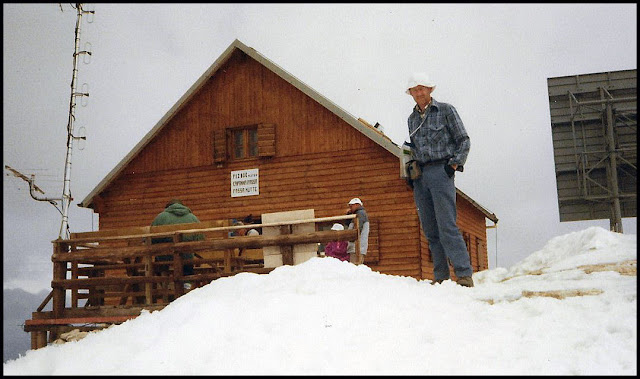 Self-timed picture on Piz Boe summit
After ten minutes Martin W came along to consume the tea I'd ordered, plus strudel, and we were joined again by the man with a pipe. Dave and John went off - amazingly we thought - on the route that by-passed the summit. 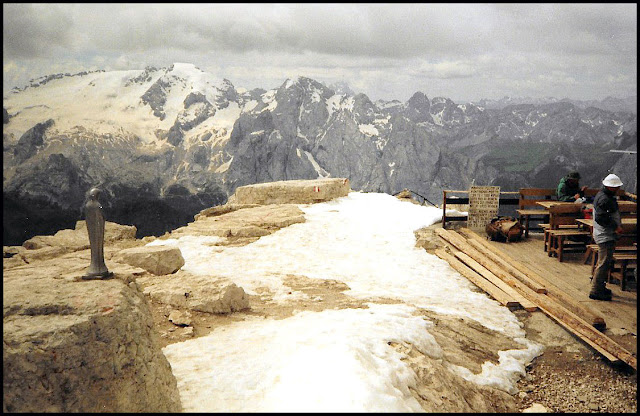 We thrutched up steep snow to a rock section which we supposed would have some ironware to justify the 'ferrata' crosses on the map. The measly 40 feet of cable gave a route with better views and that was all. It was avoided completely by the person in front. Then more thrutch up snow patches, (aware of the what 10000ft+ of altitude) to a summit (Piz Boe) with an enormous metal plate on legs (facing north so not a solar panel) and a wooden hut.

This hut was crowded with people whose attire did not seem to accord with our means of ascent. Gym-slipped schoolgirls in tennis shoes and old ladies in summer frocks. We wondered again about Dave and John not bothering to come up here. We stopped for ego-boost snapshots and soup and chocolate.

This was the highest point in the Sella Group at 3152 metres, and the views were outstanding. Only the , which had come in to view, seemed higher. We met an English hiker doing AV2 the other way who said that the Forcella della Marmolada was impassable this year, he'd been told, and that the Farangole (some way ahead) had been difficult.
The clouds were looking rather threatening and it was snowing by the time we reached the hut at Forcella Pordoi (snow finches here). 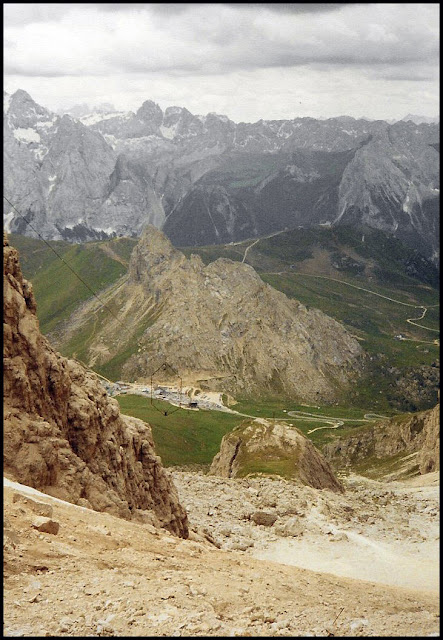 We spurned the cable car that had brought up the hordes, and descended on excitingly fast scree, then paths, to Passo Pordoi.

Passo Pordoi is very well appointed in souvenir knick-knack shops, bars and restaurants. I could even stock up on film by Access. Fortunately we bumped into our friend with the pipe once more, and he told us that the others had set off into the next hills, and that the most reasonable restaurant was the self-service at the cablecar station. A meal was certainly needed to kindle any enthusiasm for what seemed a ridiculously long journey ahead. We easily got meat free food, and were told that the Italian for vegetarian was 'vegetariano'.

So, on to the Vial del Pan, a smuggling route that contoured easily along the next ridge. Wherever it went to the top of the ridge - or rather the top descended to the path - we could see how very much lower was the next valley than the last. 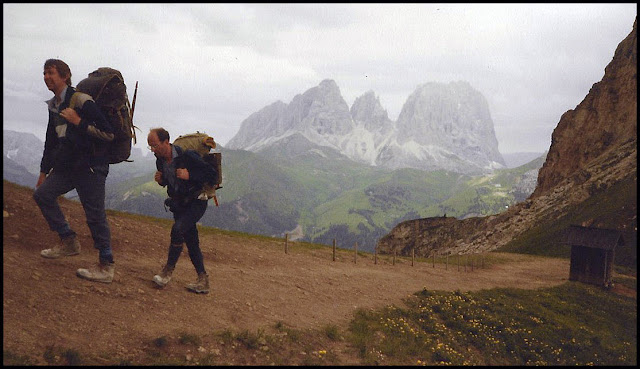 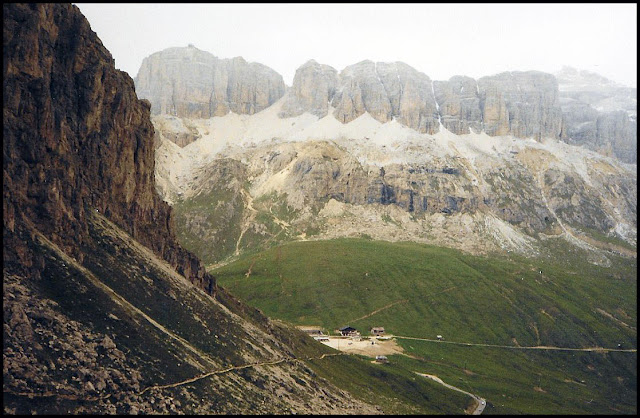 Looking back to Passo Pordoi and the Sella Group from which we descended earlier
The terrain was now all grassy and green, contrasting with the rocks and glaciers of the across the valley. There were occasional flocks of sheep, and a few marmots.

Some way along the path we met our friend with the pipe again. This time he was accompanied by two women and a large dog, and travelling in the opposite direction! It seemed miles before the path turned and descended, and we felt extremely tired, and frightened of stumbling on the exposed parts of the descent. We saw at least six Ring Ouzels as we neared the valley. 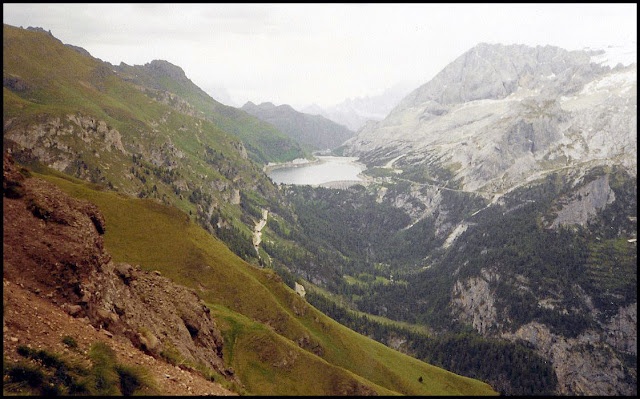 Lago di Fedaia, with Marmolada on the right 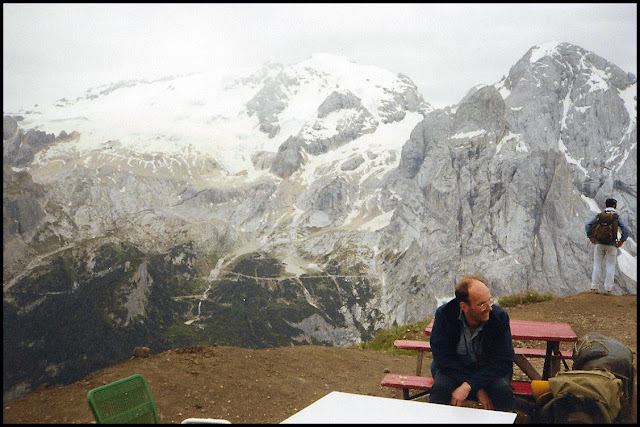 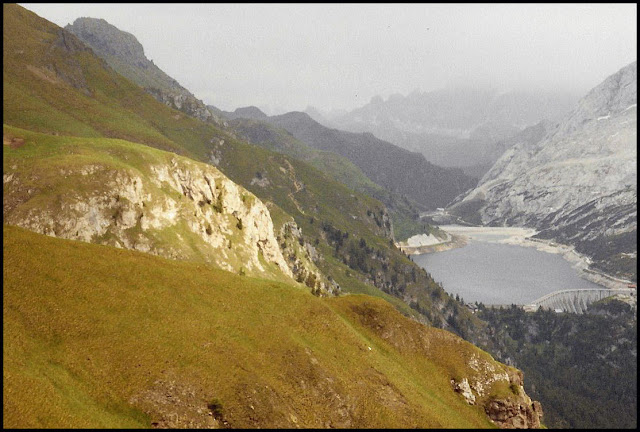 Arriving at the road, we crossed to the first Rifugio to get some more sustenance - a full meal. Considerable difficulty in getting the concept of no meat across. We were most sorely tempted to stay, being completely exhausted, but struggled back out to face the road section of the route which avoids the Forcella della Marmolada. We were prepared for it to be unpleasant, and coming at the end of an already long day, it was extremely uncomfortable. We took a disused road to the south of the Lago di Fedaia, then managed to find rough paths to avoid the multiple zigzags of the main road; after this it was a road walk. It got dark and I got blisters. Only the downhill gradient provided the impetus for one plod to follow another.

At last the settlement of Malga Ciapela appeared, but it was all plush hotels and no sign of campsites or rifugios. Further on, I asked someone and got directions to the campsite, a good mile on from the start of the village.

Arriving there, it was huge, so how to find the others? Asking after three Englishmen, each in a small tent, was not fruitful. Then we saw Dave waving, and the unlikely reunion was made, at 10:45 pm.

This is not really necessary, as Laurie's entry is comprehensive.

A superb, scenic day, not excessively energetic. Just a bit (5 hours) quicker for Dave, Martin B and John, who reassembled at Forcella Pordoi after  Martin B's stroll up and down Piz Boe. Some interesting single file contouring paths through snow, overlooking a dramatic mini . Later, lots of superb views of , helped by binoculars, with many people on the glacier. Superb contouring path before a long descent, which was still shorter than many we have encountered, and Dave was left with lots of energy to seek a good menu (ham, eggs and chips*), whilst Martin B and John continued rucksack weight reduction exercise (by eating the contents). 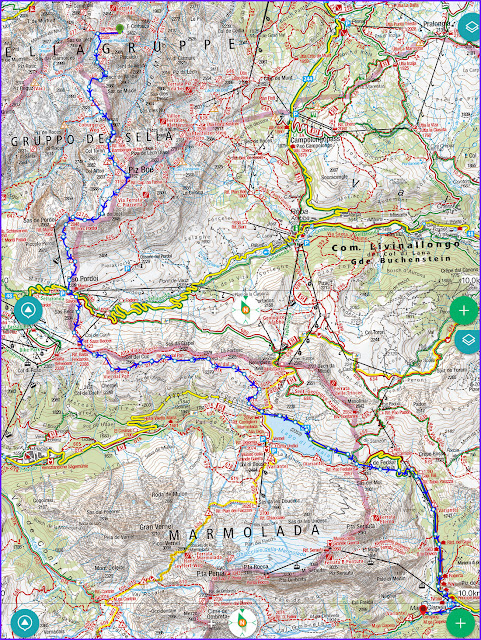 NB I think we went along the southern shore of Lago di Fedaia
* Dave recalls:
I remember the Ham, egg and chips.

I went some distance to find the restaurant which was full of happy families with plenty of young kids who knew how to behave and amuse themselves while the adults talked amongst themselves.
There was a large menu which I could not make head not tail of – the phrase books often don’t help with menus – so I selected something at random.
I suspect they gave me what they thought  I wanted rather than what I had actually ordered. It was very good and filling and I had a pleasant stay.
I seem to recall that Laurie ran out of money at this point and was annoyed there was no Bank. He had this foible about not carrying much money with him – it got us into trouble in a later holiday he and I had in the Dolomites around 2000 when we ran short of money because I had to start funding the back end of the trip.


Next Day (tba)
Back to the start
Posted by Phreerunner at 14:48

Enjoying these Dolomite posts, pictures and diaries.
We did the AV2 in July 2001, great route.
There had been late snow and all the passes well plastered. Where there were cables we couldn't use them as they were burried under the snow. All very exciting without axes or crampons.
Looking at my diary the same year I spent 6 weeks in the Himalayas, cycled the Compostella pilgrims route,traversed Majorca mountians, walked a couple of LDways in England, backpacked southern Spain and climbed with Conrad in between. Those were the days!

Happy Days indeed, Bowland, and I'd like to do the route again, albeit perhaps by-passing some of the more 'interesting' sections!

And were you raising a family at the same time? My children are loving the digitising of various family holiday etc snaps from those years, especially as they now have their own children (or will have soon).

My family were raised and I was fancy free.