Lechtal Alps Backpack - Day 0 - Getting There 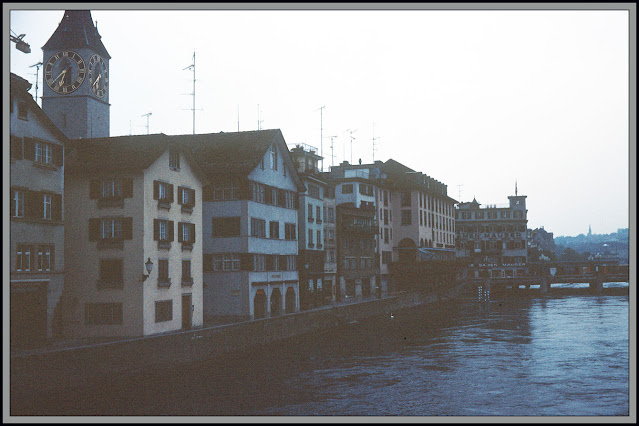 [Historic Notes: this was the first of a long series of Alpine trips, and some of us had not flown before, so readers should remember that all this was over 40 years ago.

Some of the diary entries seem pretty juvenile, but I'll try to keep editing to a minimum.

The pictures are scans of my Kodachrome slides - done on a scanner that Grant Thornton gave me when I left the firm in 2004. I'm amazed that it works after being in its box for 17 years! The poor quality of images is down to the film as much as the scanner - many of the pictures are disappointingly dark, but they bring back memories that I hope the rest of the cast will also appreciate.

We took turns in writing the diary, so there's a variety of styles.

I spent half a day trying to get the scanner to work, and another half day searching for the maps on which the route of our journey was drawn - then I transferred that route onto Viewranger (for screen dumps) rather than photograph or scan the disintegrating maps.

The cast of this incredible expedition (and indeed hopefully of the remainder of this diary):

We all arrived in at about 3 pm to catch a taxi. I was rather loaded down with food. Got abused by some natives of Ardwick who claimed they were before us in the queue. The taxi driver who arrived abused them and took us, all five, to the airport.

He was a real head case and his journey deserves a whole page at least. However, I digress - this amateur Mike Harding from Mottram, Derbyshire, charged us a quid a time.

On arriving at the airport, the food was put in rucksacks, we weighed them in (pretty heavy!) and made our way to the international departure lounge. On the way, we had to pass through the metal detectors. Our ice axes were 'confiscated' after some deliberation amongst the customs men. I was given a body search, to no avail. After a while we moved across to the immediate departure area. Here we were told we would have to wait about 40 minutes as the plane had blown a tyre on landing.

"Welcome aboard this BA Super One Eleven." That that was Captain Constable.

We soon climbed to our cruising height of 29,000 feet. Then the drinks came out. We were already reading our complimentary Evening News's. I had been talked up by Colin, an experienced air traveller in his capacity as ICI's European supremo.

When the food was brought round I was given a guided tour of a BA food box. People were heard to ask "Excuse me, where's the towelette?"

On arriving at , Dave, as a first-time flyer, reckoned it was very boring for a first flight. I agreed - I had only had one previous flight - by Аэрофлот.

After picking up our baggage, we made our way to the Flughafen Bahnhof and caught a train into the Zurich Hauptbahnhof - SF 3.20 each. Ruaridh asked the way to the youth hostel, so we then set off on a number 7 tram for the campsite at Wollisburghofen. Logical!? The site was found with some difficulty. We were given some directions but 'linnsed' instead of 'rechted' as Colin put it. The campsite was very muddy but the office was closed and didn't open until after we left in the morning. 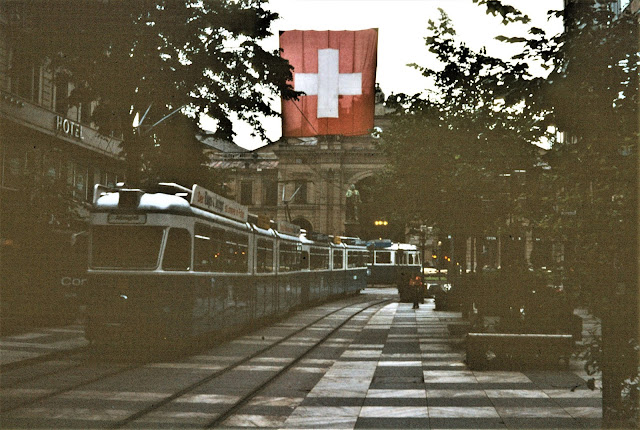 Next Day
Back to Index
Posted by Phreerunner at 19:09