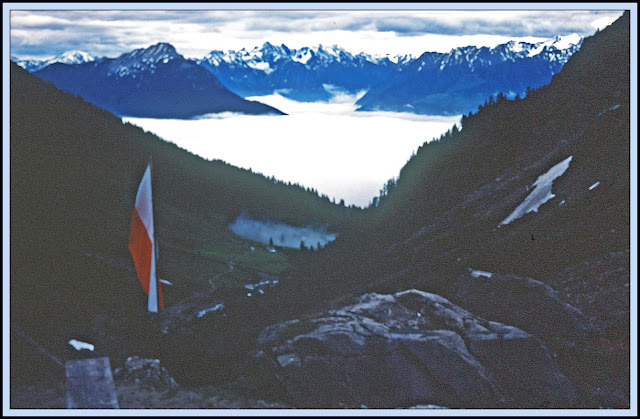 The mattress was so cosy that most of its occupants overheated. An early rise presented a sandwich of scenery between the respective cloud levels of 3500 metres and 1500 metres. The full, albeit continental, breakfast did not include any beans. However, we set sail with a fair wind after Colin had taken the wrong route (but also forgot his rucksack), and I thought I saw a sparrowhawk. 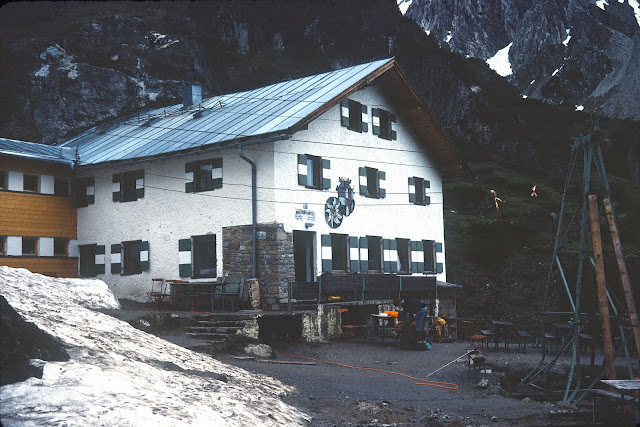 Left Muttekopfhutte 8 am after an exquisite (ie very pleasant) sojourn there. Is it will it was it raining? Black lizards (salamanders?) mating; some friendly long-eared dingaling sheep. Mist in the valley. 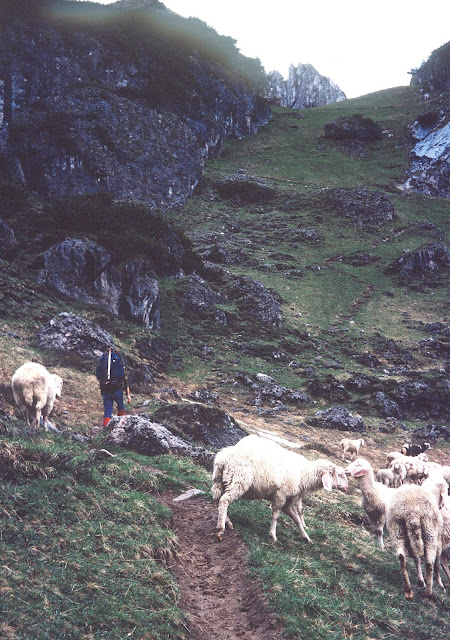 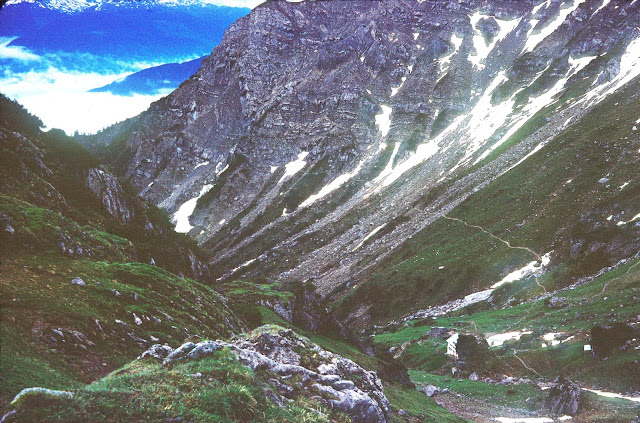 Looking back down the valley to Muttekopf Hutte 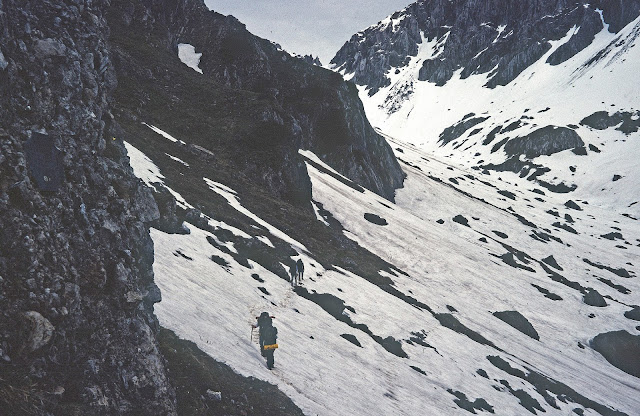 The weather cleared. After a hard kick or two the ridge was attained, whence we perused many , not least Heiterwand and, more distant, Gr. Grottenkopf. 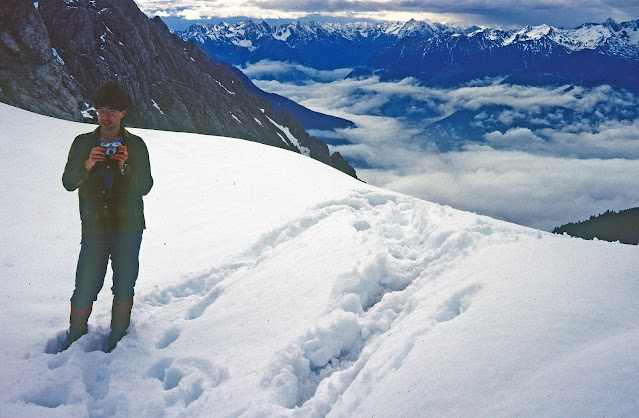 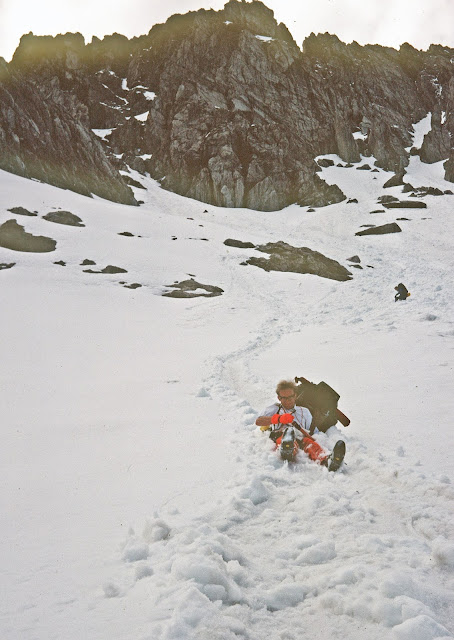 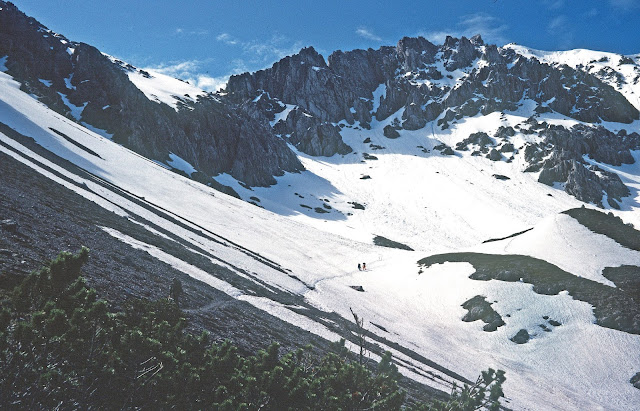 The view back to Muttekopf 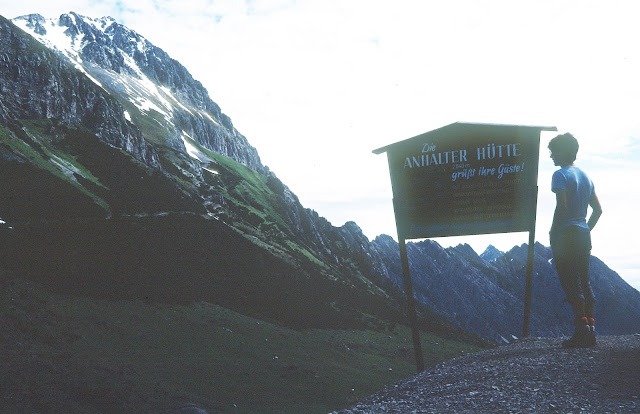 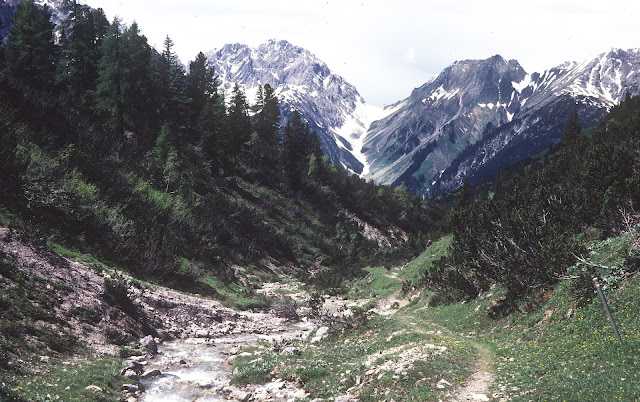 The view towards Boden, with Spitkopf 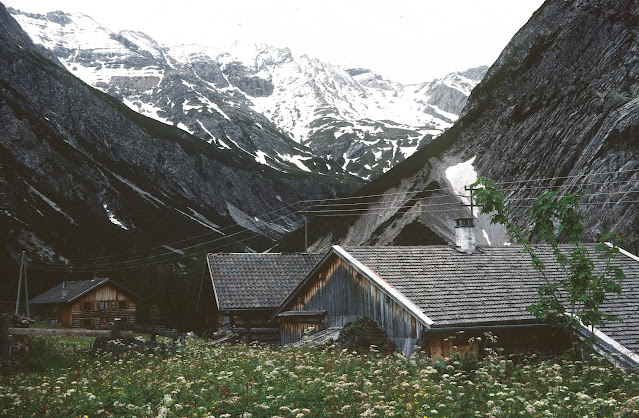 Eventually descended to a stream near the road and consumed our first lunch of the day. Much changing into shorts. Nick's and Colin's were particularly silly. Lots of tourists and Alpine flowers. What happens when you throw a piano down a mineshaft? At this point I assumed the congregation's reaction and bogged off. (This was all written over 40 years ago on our first Alpine trip...) 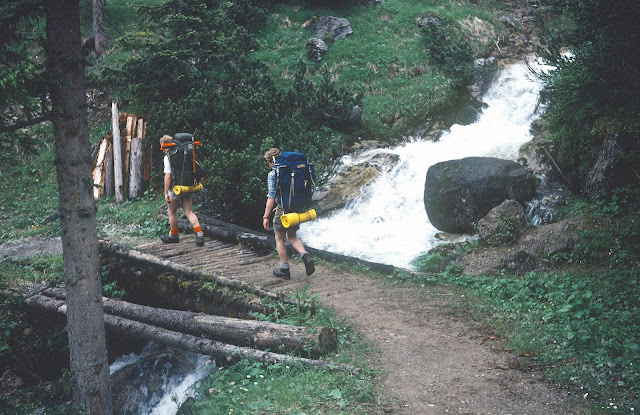 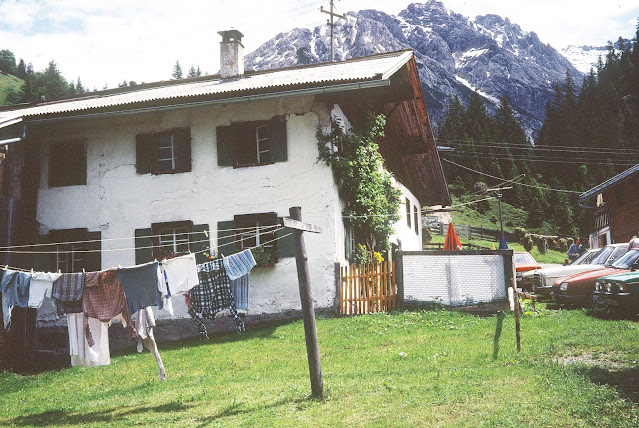 The stroll down to Boden was picturesque and followed a stream. A brief interlude at this tourist centre revealed ye original haymakers, an extortionate beer garden, a post box, and some curious foreigners (maybe it was my legwear). Dave escorted us at breakneck pace to the foot of the steep hill to Hanauer Hutte, where during our brew Ruaridh negotiated a lift up for our packs on the hut transport system. The said packs were duly transported part way up, then back down again. Ruaridh is now renegotiating (to be continued). A Flat Miner. 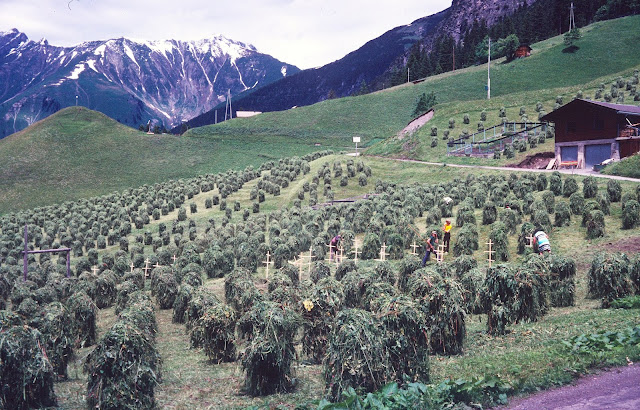 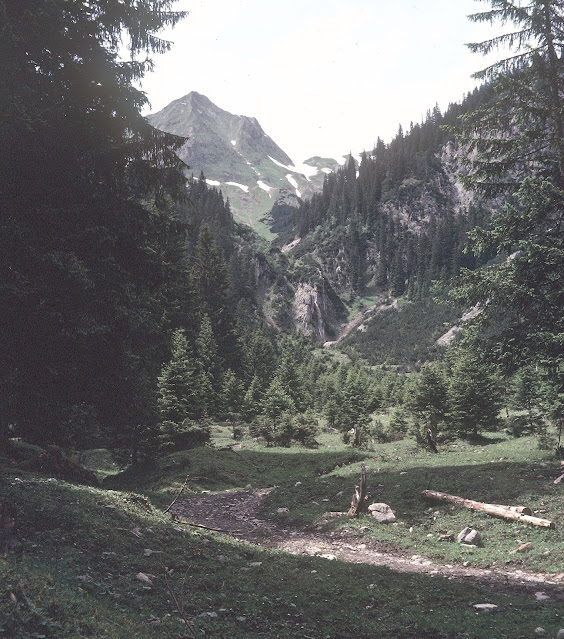 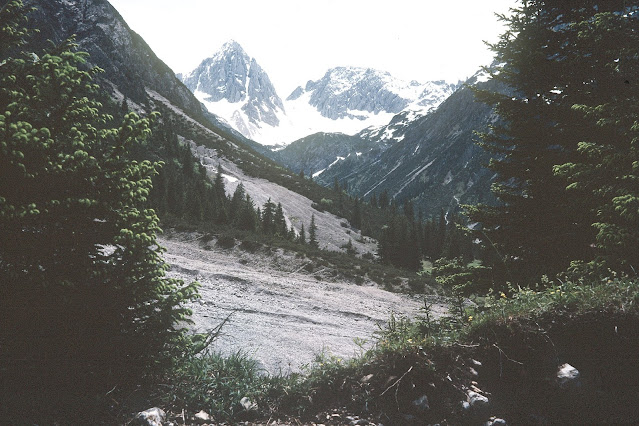 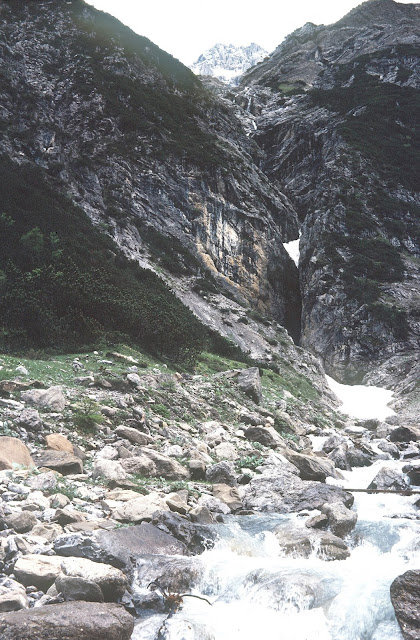 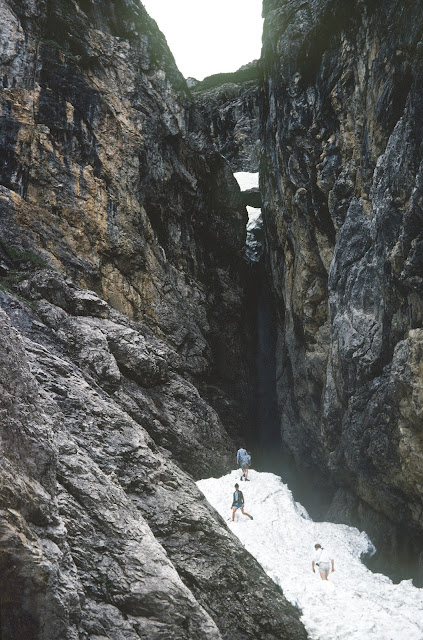 The rucksacks were collected at Hanauer Hutte after Ruaridh had exercised his cinematographical prowess and Dave (Josh) Scruby had drenched himself under a massive waterfall. 4:30 pm. Set up idyllic camp near the hut, much to the warden's surprise. "How long are you staying at the hut?" he asked. 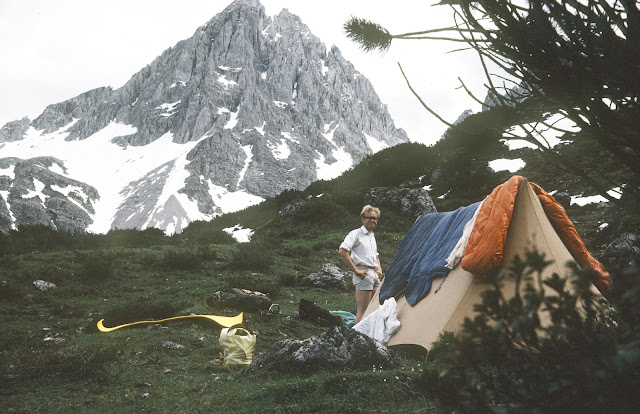 The view of the valley towards Boden is also very picturesque despite green blight up to 2000 metres in places. Dominating features to the north are Egger Muttekopf (2379 m) and Ubelwand (2744 m) on the right, and, more distant but equally enticing, Elmer Muttekopf (2357 m) and its exciting ridges (named after an early fatality involving American tourism), and in the far distance the 'rounded' peak of Schwarzhanskar Sp. some 12 miles away, can be clearly espied. On the near left, Potschallkopf's summit (2589 m) is cheekily exposed behind a spectacular foreground. Sod it. Nick's just reclaimed the map. RMP rules ok. The sun is shining. Snap, snap, click, clank bang.

More beef bourguignon and rice. Delicious. Nick and Colin bogged off to Hanauer Hutte. The rest followed. Beer and schiewasser. Colin had a Gentian schnapps and had to drink it quickly before it evaporated (it was refluxing heavily). Ruaridh chickened out. Colin's weather forecast (as interpreted from the warden) - "the stuff from yesterday could come back again". I am told there is a good view from the smelly bog. 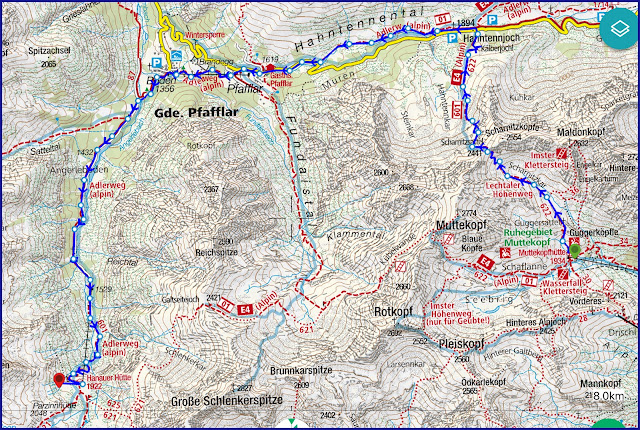 Next Day
Posted by Phreerunner at 15:50

A fabulous and very entertaining read Martin! Thank you for sharing. Looking forward to the next stages of that 1980 Lechtal Alps trip. In the 1980s mountain walkers from Britain roaming the Austrian Alps weren´t that common and a rather exotic species. In contrast to other mountain areas here in Austria the Lechtal Alps have kept their wild & ruddy character since then. The Pustertal Mountains & Villgratener Berge (between Staller Sattel and Lienz) from Brenner/Brennero to Lienz are among the wildest parts of the Eastern Alps and only marginally spoiled by touristic infrastructure. A long-distance hike from Brenner/Brennero to Lienz would take approx. 11 - 12 days across the grandest scenery one could wish for. With only one larger town (Sand in Taufers, South Tyrol) en route and almost no road walking.

Thanks Markus, you'll enjoy some of the pictures to come. Sue and I came to this area again as a diversion from E5 in 2012. There was less snow then.