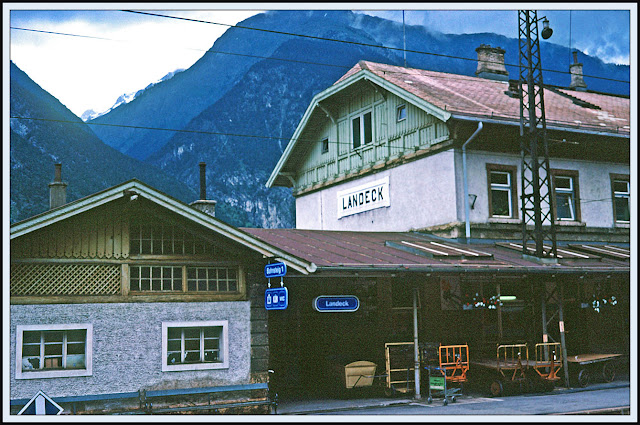 Arising at 5:40, we quickly packed our gear away. As the office was not open we unfortunately couldn't pay our SF 3.50 per head. We caught the number 61 bus (there's an excellent public transport system in ) then walked to the railway station. Some debate as to which train we should catch.

The water bottles were filled and we boarded a train on the way to Wien. Martin wished it was a steam engine like there used to be when he was at UMIST! It wasn't though. Slightly more spartan than BR possibly, though they have some better ideas. But, how many BR men speak any foreign languages? The Swiss rail guard spoke several, but he didn't know when the train would arrive at Imst. The scenery would have looked much better if it hadn't been for the low-lying cloud everywhere as we passed down the Zurichsee, then over the Rhine to .

At Buchs just before we reached the border, there was passkontrol, most disappointing as they didn't even look inside our passports. At Feldkirch in we put our watches forward an hour.

Breakfast had been taken on the train. The guard looked slightly surprised when he saw me squidging Primula out of the bottom end of a tube.

Dave was tired through lack of sleep.

Arrived at Imst, via Landeck, at 12:30 new time. It started to drizzle as we walked up towards the town. Imst is geschlossen after 12:00 on a Saturday. Slight problems due to lack of gas. Ruaridh and Dave went to enquire at campsite shop. Success! Meanwhile Colin found an eispickel shop, unfortunately shut, and also saw a notice about a ski lift from Hoch-Imst. We then had a longish sweaty day with heavy rucksacks up to Hoch-Imst and the bottom of the lift. 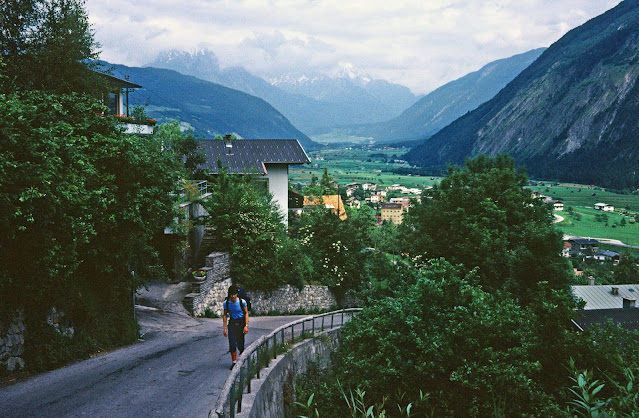 We had lunch here. Colin obtained some water and food was then 'equally' distributed. The rucksacks still felt as heavy afterwards! We decided to take the lift up to the middle station, total cost 185 Schilling (37 Sch each), then headed off towards Muttekopfhutte. 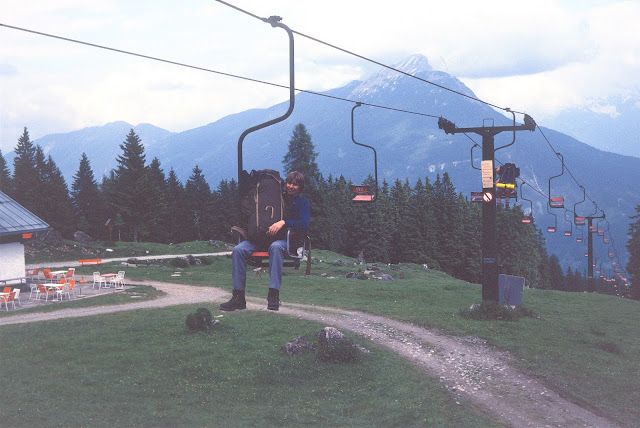 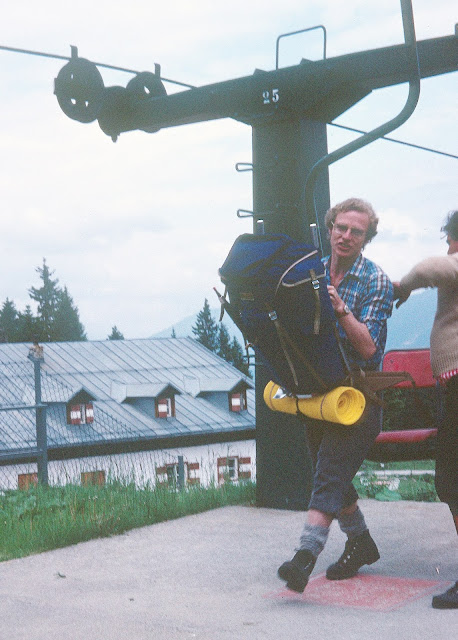 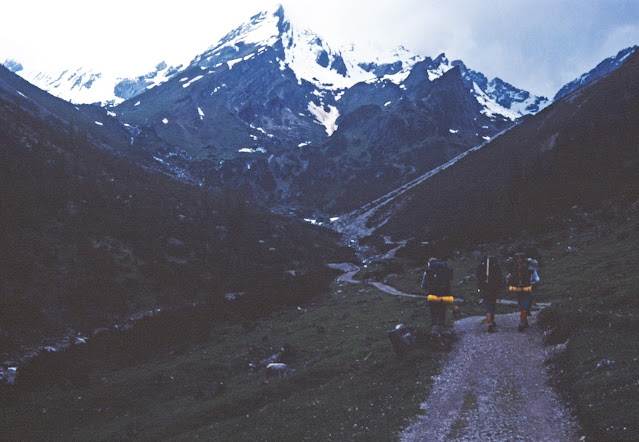 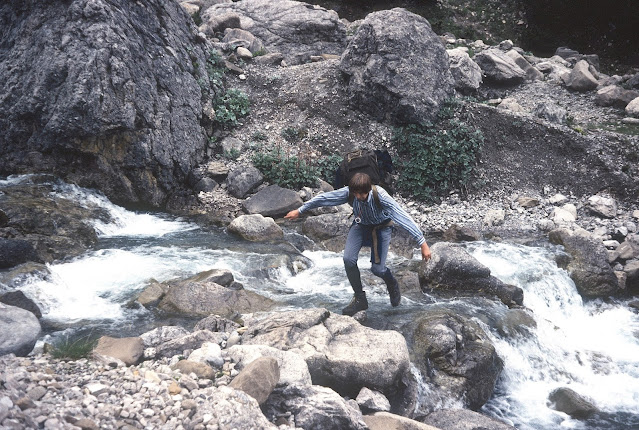 It suddenly struck us how quickly we had got here. "It's like being beamed into the middle of the ruddy , innit" said Colin. After the Muttekopfhutte had come into sight and we had left the jangling cows behind, we decided to pitch camp. The 'site' was not very level. Ruaridh reckoned he'd found a better one, but that was only because he had left his rucksack down there! 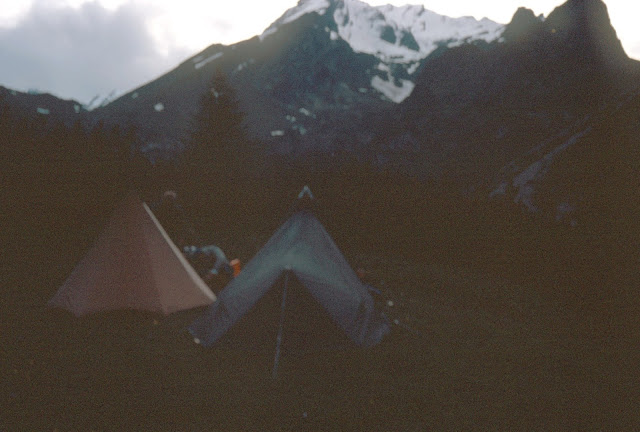 Orange juice, followed by beef bourguignon and rice, and finally coffee and chocolate biscuits were consumed enthusiastically. Ruaridh went off to wash up, 'singing', in his own sort of way, the 'Sound of Music', making him the third Julie Andrews we had seen during the day:

(3) Ruaridh macpentax, earlier also demonstrating his cool technique on the lift - rucksack in one hand, Pentax in the other, without his chain fastened (and no safety net!).

There then followed a discussion in some quarters on flatulence, due to the effects of AFD foods being somewhat similar to those of Beanz. While drinking coffee somebody pulled Dave's billy out of his rucksack and his nuts spilt.

Action of the day: 15 postcards had supposedly been purchased in Imst between Ruaridh and Dave, complete with stamps. It was decided to divide these equally between us. When this had been done, three people had three each; one had three cards but only two with stamps, and Dave only had two cards - how?

To bed at about 8:15 on a slope. Views had got progressively better during the evening as the cloud lifted, but it was now drizzling slightly. Fell asleep to the sound of a roaring torrent, chirpy birds, and Dave snoring. 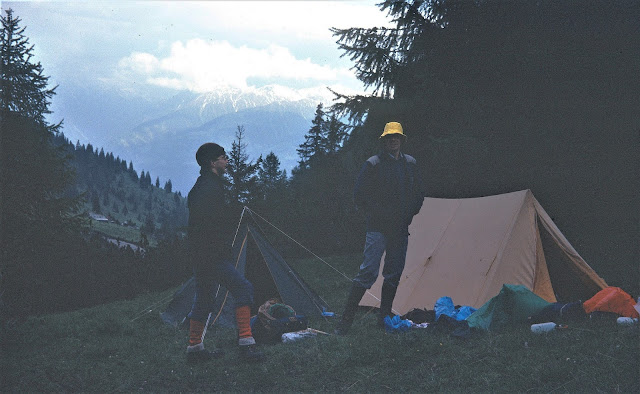 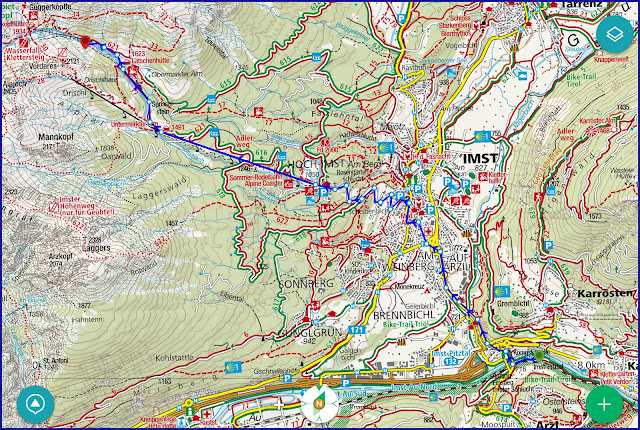 Note: the Kodachrome slides are mainly fairly dark, so scanning them is pretty difficult, especially as I'm still learning how to use the scanner. Bear with me...they are in the correct chronological order, but may not be in sync with the diary entries!
Next Day
Posted by Phreerunner at 14:09