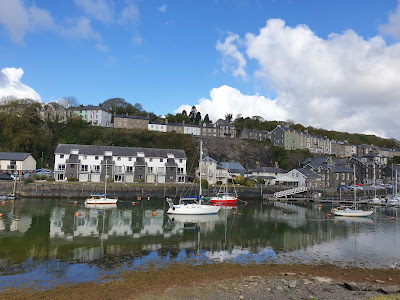 On a sunny morning we breakfasted in front of the above view of the harbour from our living room.

Eventually we set off on a 40 minute drive to Brithdir, just beyond Dolgellau. Our walk started down a lovely path beside the Afon Clywedog gorge - known as the Torrent Walk.

Whilst most wild garlic is still in bud around here, for some reason there are patches of flowers in this spot. Sue collected some leaves to supplement our dwindling supply of lettuce.

We met a couple who had seen firecrests and nuthatches on their way up the valley. They were the only walkers we saw all day. 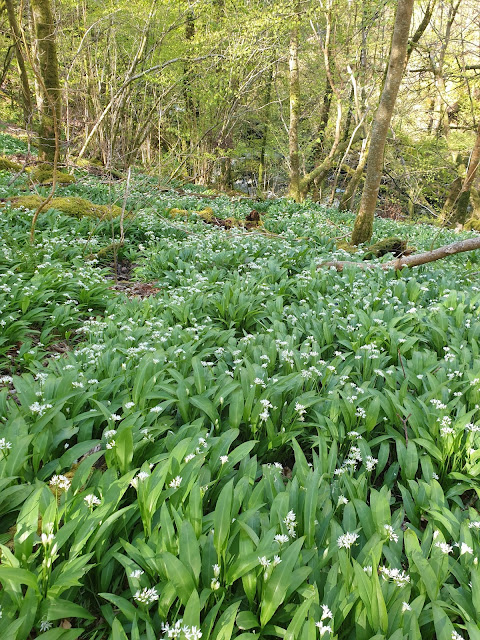 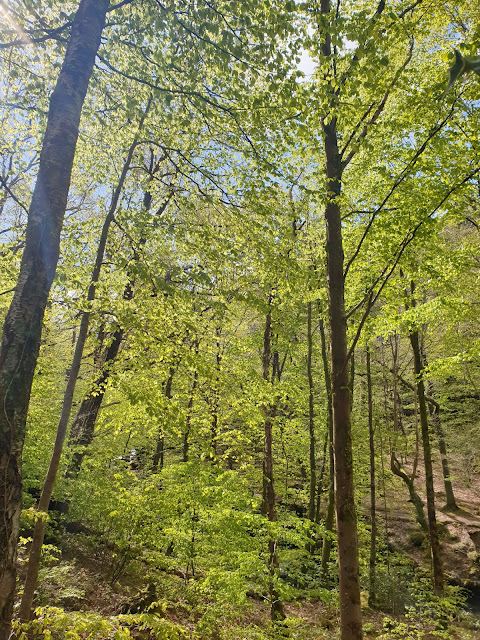 Making our way to the forest of Coed Dolgwartheg, we admired the expanses of bluebells and the moss covered vegetation.
Around here we passed a memorial to Evan Jones (1820 - 1852), neatly placed in the wall of the ruined building in which he must have lived.
We also passed a hotel that may be used by HF Holidays, as there was another plaque in tribute to HF and local ramblers, who had been responsible for improving some local paths. 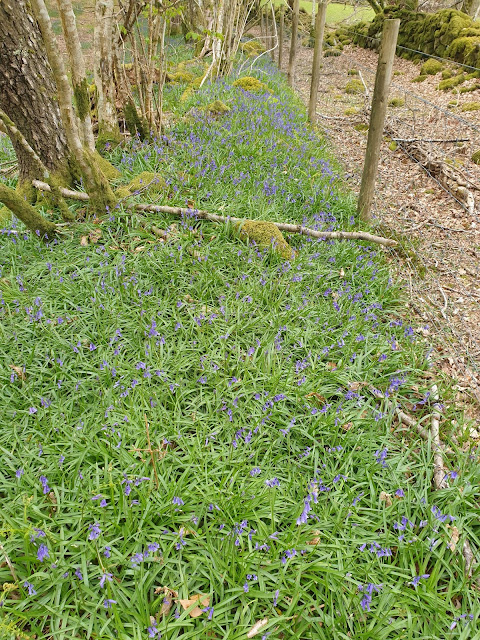 Near here, a section of the path, which must be only rarely used, was obscured by fallen branches and moss covered boulders. It was a minor surprise to emerge from this vague memory of a path at the gap in a wall predicted by Alex! 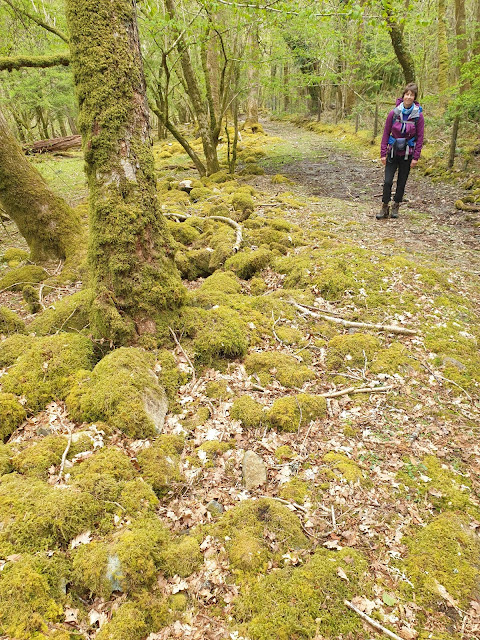 We saw a pair of nuthatches in the Coed Isaf woodland, as well as pied wagtails, thrushes and robins on the edge of the forest, where we found a comfy spot for elevenses. 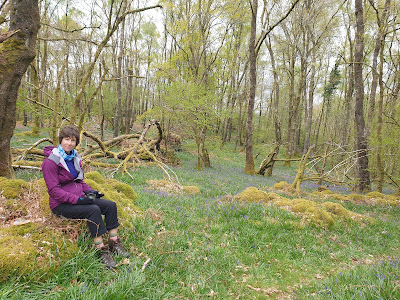 Eventually we emerged from another tranch of forest, beyond Helygog. I wonder what will replace these felled trees? 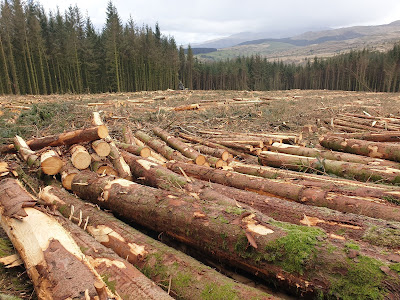 Soon we were on the open fellside of Glasgwm, with fine views towards the Rhinogs, and in the other direction the distant Moelwyns. It was a fine spot to stop for lunch. We donned waterproofs, but the two rain showers passed either side of us. 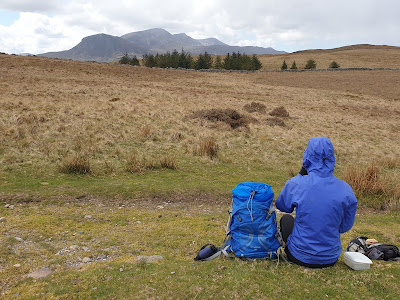 After descending to Brithdir and admiring the remains of a Roman fortlet (aka police post) that comprised a flat piece of land in a field, we continued on to join what is apparently the unsignposted route of the Cross Britain Way, an alternative coast-to-coast walking route, 279 miles from Lincolnshire to Barmouth.
We soon turned off to ascend to the 343 metre summit of Foel Caerynwch, our highest point of this trip, with fine views pictured below. 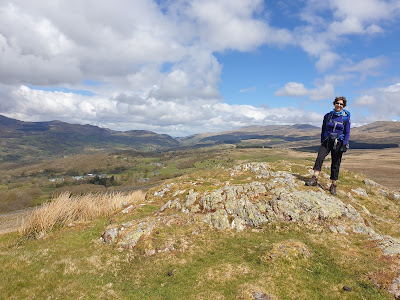 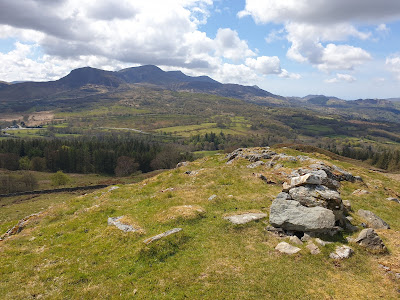 After taking an anticlockwise route over this hill, a well waymarked route by way of numerous posts with white blobs, we found ourselves back at the fortlet.
Soon we had rejoined the path of the Cross Britain Way. This was not an imposition as it enabled us to admire the splendid garden at Ty'n-Ilidiart. This time the owner was outside and we chatted for some time:
"Are you going up the Pimple?"
"We've already been up it. What a splendid day..." and so on.
From here it was a straightforward walk back to the lay-by from which we had started, near where we passed a spring next to a farm. 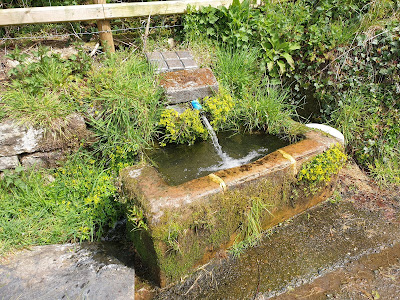 Here's our route - clockwise with a small anticlockwise loop, starting from the south eastern corner of the wooded valley on the left of the map, denoted by a small purple circle. 16 km, with 550 metres ascent, taking us rather less than five hours.
Another excellent outing.
(Click on the map for a better version.) You prompted me to look back on my next to last day on The Cross Britain Way reminding me of things that have dimmed in the memory. I calculated my route at 19 miles, but Gayle, precise as ever, re-calculated at 20.4 miles "with 2300ft. of up" "twas a very fine walk indeed.

That was a good weeks holiday.
I was out picking wild garlic yesterday.

Yes BC, lots of lovely lowish level paths that were new to us. There's absolutely masses of variety here either from 'home' or after a short drive.