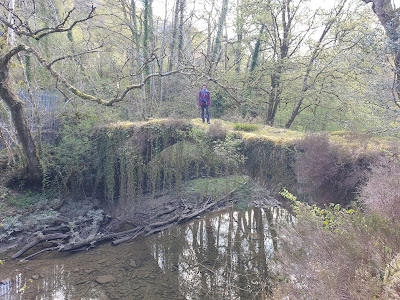 On a sunny morning we drove the short distance to a lay-by near Maentwrog Power Station, from where there are three well marked walking routes in the forest.

Shortly after an information board giving details of the walks - ours was the red one - we came to the eponymous 'Ivy Bridge', on which Sue dutifully posed - see above.

The forest path rose with a varying gradient, sometimes up steep steps lined with Wood Sorrel that I've been describing to companions on recent walks without them spotting it. You couldn't miss the small flowers and triangular leaves here. 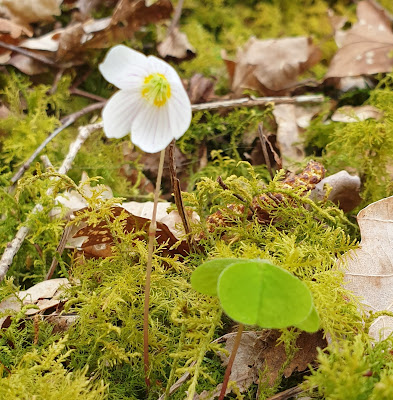 This was a delightful woodland walk. The path reaches a waterfall where a family was having fun, before heading to a high point from where the white or yellow route can be deployed for a longer outing. 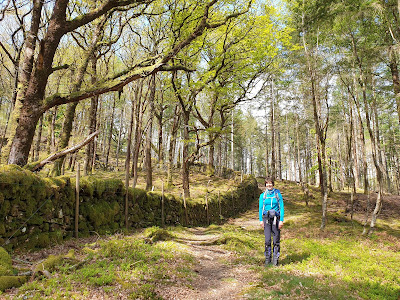 We met a couple who were walking the route in the opposite direction - a pleasant chat with the only people met on the walk.
According to my guide (Alex), the area is mentioned in the Mabinogion, as the place where the wizard Gwydion fought Pryderi, Lord of Dyfed. At the time, Dyfed and Gwynedd were at war, a war that had been started by Gwydion tricking Pryderi into losing his prize herd of pigs. This was all in an effort to force Math, the ruler of Gwynedd, to leave his court and fight, allowing Gwydion's brother Gilfaethwy to rape Math's virgin attendant Goewin. The war ends in the single combat between Gwydion and Pryderi, in which Gwydion wins and kills Pryderi. When he finds out why the war started, Math punishes Gwydion and Gilfaethwy by turning them into the male and female versions of various animals for several years in a row and forcing them to mate with each other. Pryderi, who is buried in this wood, at least had a more noble fate. 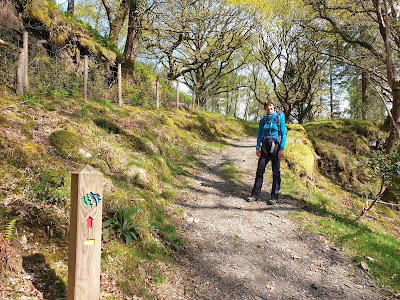 Here's the route we took, clockwise: 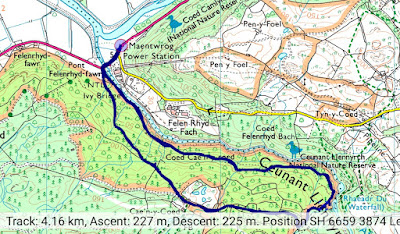