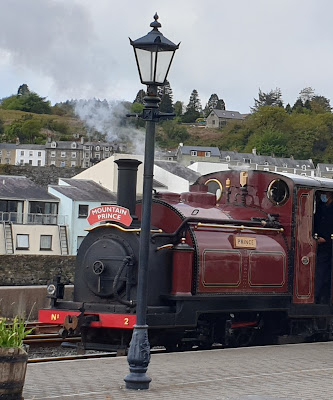 Breakfasting to the sound of hailstones bouncing off the deck, we weren't encouraged to leave the cosy safety of our house with any urgency. The oyster catchers, had we been able to see them, were probably flying backwards.
So it was 11 o'clock before we set off. I know that because the first picture of the day was of Prince, heading up the 11.05 to Tan-y-Bwlch.
We've been up Moel-y-Gest numerous times. Today we chose Alex's route, taking the coast path to Criccieth then heading over the main summit, whilst by-passing the lower of the mountain's twin summits.
After walking along the sea-front at Borth-y-Gest, the route takes a lovely path between the sands and a golf course. 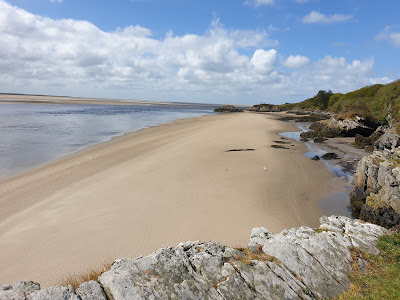 There was a very convenient bench for elevenses and a chat about gaiters with a Welshman, one of very few people we saw out walking today. 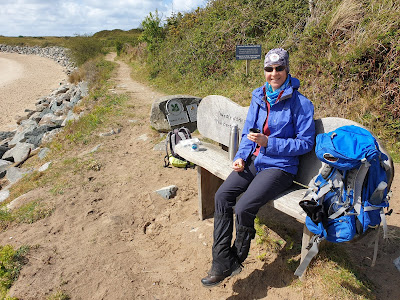 Black Rock Sands turned out to be a 2.5 km sandblasting experience, with swirling sand, but on reaching the outskirts of Criccieth we entered the relative calm of the lane to Treflys. Here, there's a small church, St Michael's, beside which we enjoyed lunch with Thomas and Jane Jones on their lovely warm tombstone. 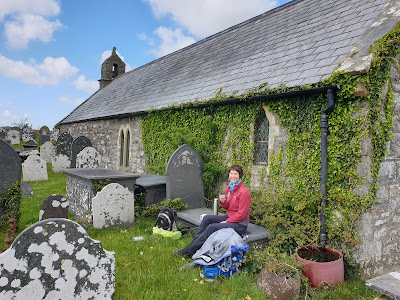 A little further along the road, we enjoyed fine views generally, and in particular of today's mountain objective.

A steep climb past bluebells and primroses brought us to a broken stile and a pause for breath on the pretext of doing a bit of editing for Alex.
Here you can see Moel-y-Gest's lower summit, together with the Glaslyn estuary. 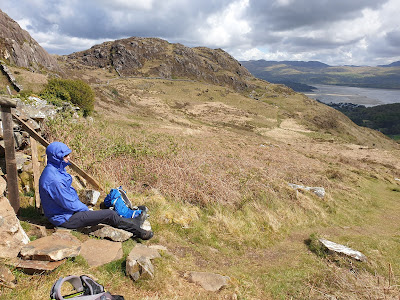 From here, a short if steep climb brought us to the 263 metre summit of Moel-y-Gest, possibly one of the best viewpoints in Snowdonia. To the right of the next picture are the distinctive features of Cnicht and the Moelwyns, and below that is the view towards Snowdon, on which the fresh snow is capped by a sea of cloud. 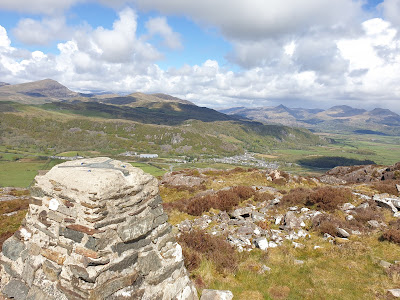 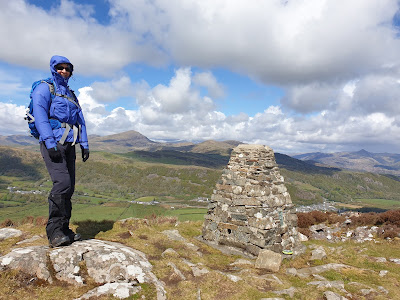 We headed back along the crest, trying to follow Alex's route description. We just about succeeded, but given the large number of paths up here you could simply say 'follow the crest of the ridge taking paths to the left (north) to reach the bealach, from where you can either contour left to by-pass the lower summit or head straight over it on a clear path, in either case heading down towards the town'. Either way, you get views like this. 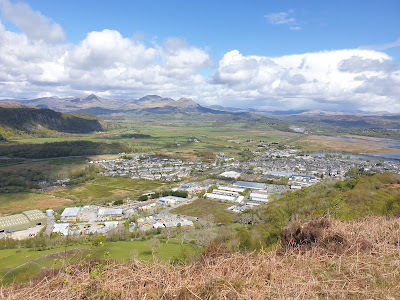 We were back at base after this 16 km walk by before 4pm, at which point the hail returned. It was good to be able to view the precipitation from the comfort of our sitting room behind a tray of tea and biscuits!
Here's the (clockwise) route - by some miracle Anquet failed to crash for four walks in a row - 16 km, with 400 metres ascent, in rather less than 5 hours. The light blue line is Alex's GPS download. 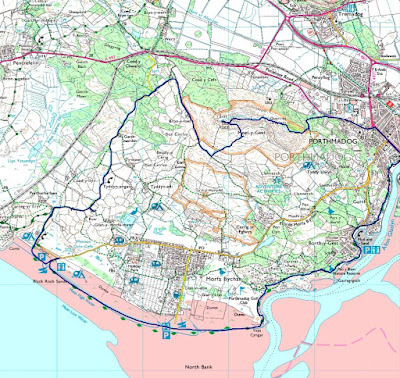 My ascent 8th February 2014 was during a caravan sojourn there coinciding with one of those named storms. It was a wild experience - here is part of my blog post recording my ascent of Moel-y-Gest:

"Rain was on and off, but wind nearer the top and on the summit was vicious, but I have known worse. This is a steep rocky peak and I had a bit of scrambling about trying to find the highest of the rock outcrops as well as visiting the trig point. Views of the sea with perhaps thirty parallel lines of foaming breakers stretching a long long way off shore justified this ascent."

What a wonderful area.

Brilliant. Yesterday was benign in comparison.