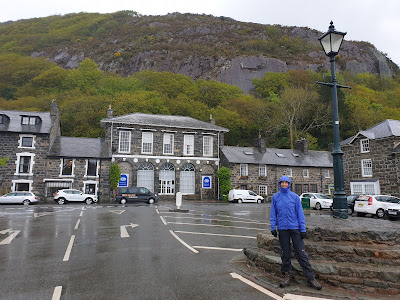 Here's Sue's report on today's walk:
The forecast wind and rain arrived as anticipated, so we stepped out of the car in Tremadog fully waterproofed and without anything except the walking guide, phones and two biscuits! A green lane led to a steep ascent amongst the sheep and lambs, then into woodland where the rain was deterring the birds singing above the bluebells. 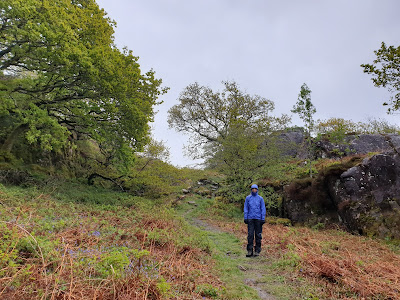 Beyond the woods, a windswept track took us past a standing stone and views towards the Moelwyns that on a clear day would have been good. 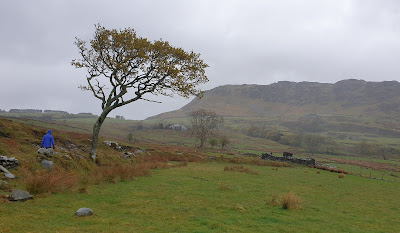 Along a section of road below crags, sheep were sheltering behind walls in the lee of the wind which, in this higher terrain was bringing sheets of rain sweeping across.
(It was at this point that I retrieved my phone from a puddle in my anorak pocket and took a couple more photos before secreting it somewhere dryer. We passed the remote farmhouse of Erwsuran, which enjoys lovely views - on a better day - down to the coast - M) 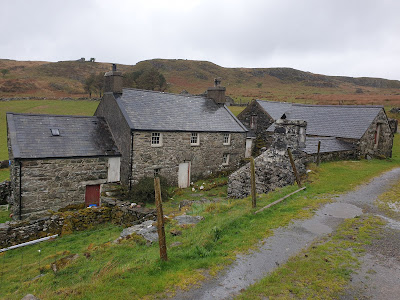 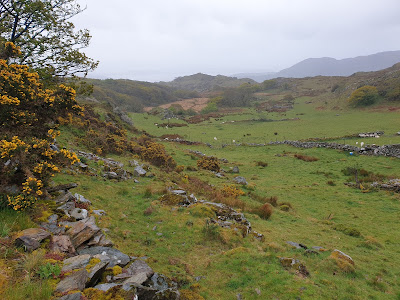 After contouring round the hillside where we passed through an elegant old metal gate we began descending, yomping down the easily graded track. After consuming our biscuits, the path suddenly took a right turn - heading back uphill! So, we climbed up the field to another high point where the wind buffeted us around before a steep descent into woodland and respite from the wind. The path joined a cycle track just outside Penmorfa, providing a level path on which to return, first to the hospital and then to the centre of Tremadog. Strangely, we encountered no one on this walk, which we finished around 12.30.
Over to Martin:
Thanks Sue. Here's our 'click on it for a better version' route - thanks again to Alex - about 9 km, with 400 metres ascent, taking rather less than two and a half hours. 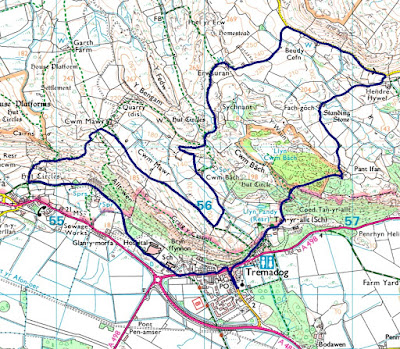 After visiting the supermarket, we had no further need or desire to venture out again today. 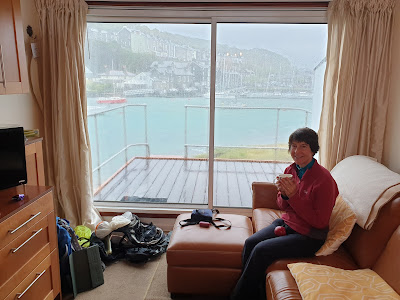 That last picture doesn't really do justice to the scene before us. The windows are rattling and driving rain is trying to take control. We wonder what it's like on/in the bucking boats in the harbour. Normally the sailors could take refuge in local hostelries, but today they are only allowed outside, which could be cold and wet. 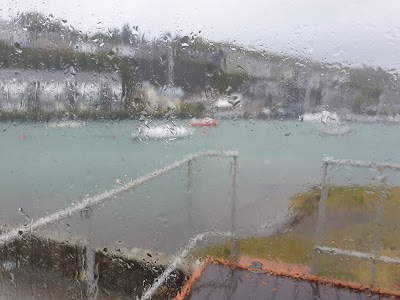 Odd to encounter not a soul out and about on a Bank Holiday Monday; I wonder what kept them indoors?!

It looks like you're due a drier and brighter day today, which will hopefully reach us by tomorrow.

Note: the route was anticlockwise- I haven't worked out how to put arrows on the Anquet 'track'.

Thanks Gayle, we avoided the rain today.