Sunday 2 May 2021 - Around Blaenau Ffestiniog 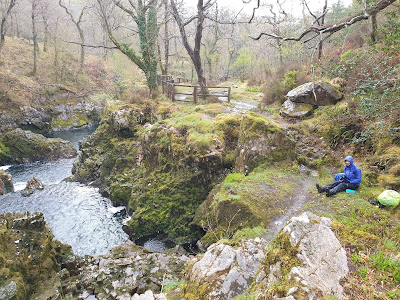 After our walk from near Maentwrog, we took a short drive to Blaenau for this 12.5 km clockwise loop to the south west of the town.
Unfortunately, after we'd paid our parking charge of £3.30 for four hours and sorted out our clothing and gadgets, it started raining. "Just a short shower" we thought, as the forecast had suggested a fine day with 10% chance of rain.
In the event, it rained for the next three hours. Very few photos were taken.
Eventually hunger got the better of us and we found a spot under a tree, where Sue is pictured above. The second picture was taken from this same spot near a bridge over the Afon Goedol. Sue complained about the drips that splashed forcefully into her coffee and scalded her! 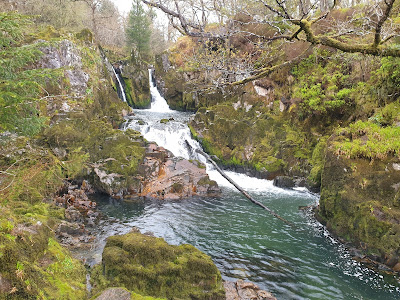 We continued in the rain along the excellent paths adopted by this route. Oak trees grown here in the 18th and 19th centuries were transported down the valley to Porthmadog to be used in ship building. The harbour pictured in yesterday's posting must have been a very different place then.
We heard our first cuckoos of the year and watched (or heard, in the woodpecker's case) a variety of other birds including goldfinches, a coal tit, wrens, lots of robins, and many of the 'usual suspects'. We are still seeking out tree creepers - there must be some nearby.
Before reaching Tanygrisiau Reservoir - pictured below rather later when we were looking back along it - we met four damp but cheerful gentlemen, with whom we chatted for some time. They had abandoned a higher level walk due to the rain, which was falling as snow higher up. It wasn't a warm day. 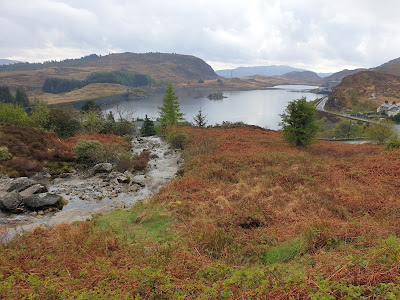 As we approached Tanygrisiau, we could view in several directions the legacy of the immense slate quarries that are the reason for Blaenau Ffestiniog's existence. 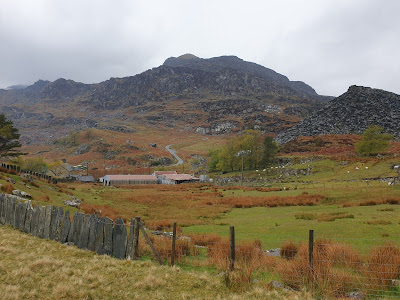 Making our way back to the car park in slightly less inclement weather, we noticed a variety of flora coming into flower, including tormentil, lousewort, a very wet loving small white saxifrage, and more. Earlier we had seen masses of bilberry flowers.
Our excellent 12.5 km clockwise route is shown below. It took us three and a half hours. 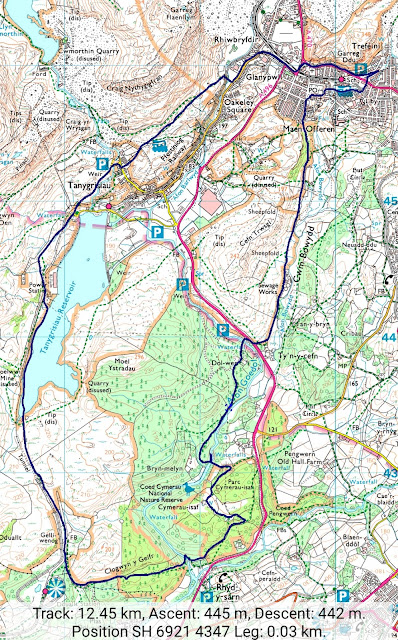 A very nice route. Ddid you do it clock wise or anti. Not that it matters but its interesting to follow the map route.