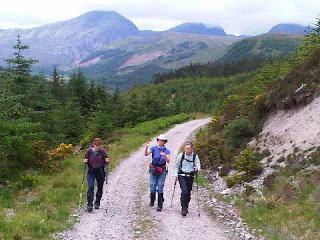 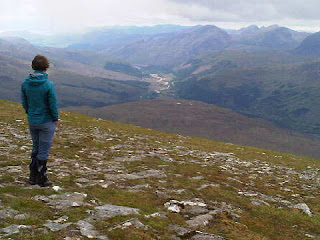 Today our 18 strong party all took to the hills. The 'A' team comprised nine of us who headed off from the outskirts of Craig, in Glen Carron, before 10am.

We'd left Tom's car at the usual parking spot for Moruisg and immediately reaped the benefit of avoiding the direct route up that hill. The track beside Allt a' Chonais and subsequent stalkers path up Sgurr nan Ceannaichean were a delight in comparison with the thrutch of the former route.

The view back to Fuar Tholl and its neighbours (pictured) enthralled us through our wing mirrors as we rose gently to the former Munro's summit. The zigzag stalkers path was Alpine in nature and easy to follow. I could see Keith and Phil ahead, four more behind, with Sue and Jenny bringing up the rear, each group strolling in apparently opposite directions on the zigzags.
Then Sue and Jenny disappeared. We waited for some time at a zag, then at a zig. No sign of them. A search ensued, finally tracking them down to a cloud on the summit. Once we'd all arrived, the cloud rose and everyone was happy.

The errant duo had been distracted by the flora, which like the path they failed to follow was decidedly alpine in nature. Today we added the following to our tally:
Lousewort
Thrift (why is it just found on sea shores and on mountain tops?)
Common cowwheat
Cowberry
Starry saxifrage
Yellow mountain saxifrage
Atlantic butterwort
Wild thyme
Cotton grass, and
Water avens

Up here there were lots of wheatears, ptarmigan mothers with excitable chicks, and a baby red deer that ran off after being disturbed by Tom; we hope its mother found it again.

By the time we reached Moruisg's summit we could enjoy wide ranging views - from Glen Carron (pictured) that was in the centre of an arc of cloud laden hills to its south, with the cloud free tops of Liathach, Beinn Eighe, Slioch and the Fisherfield Forest hills amongst many lined up to its north. Whilst the Cuillin massif was in cloud, the hills of Harris were clearly visible beyond the northern tip of Skye.

The direct descent (better in descent than in ascent) to Tom's car was steep but easy, apart from a newly erected deer fence near the bottom, where the planting of a forest of 'native woodland' is imminent. We managed fine despite the absence of a stile or gate where we entered the new plantation site, where the ground had been massacred in preparation for planting.

We returned to the Lodge for 5pm, when France were seen to thrash England's footballing underdogs 1:1 in the sides' first game in the European championships.

Then Louise excelled again, with another fine meal.

Tut Tut mislaying people. Especially Sue. You know you should walk at the pace of the slowest person on the hill.
Looks and sounds like you had a decent day out. No waterproofs then.

Sue was only a few metres behind the person in front of her, and was in clear view of the rest of us zig-zagging up the path when she went awol. I suppose we should really rope up to avoid that in future.
Ha
(No chance!)