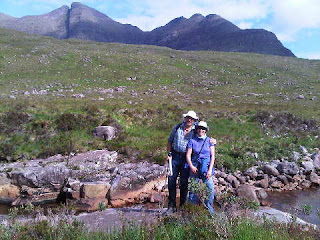 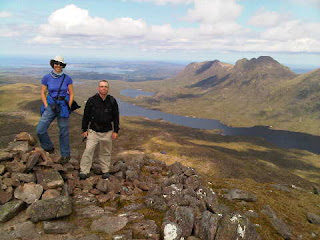 Beinn Alligin is one of my favourite hills, so it was great to be up there again today.

Unlike Monday, when both hills had several summits of similar height to visit to ensure that the tops had actually been 'bagged', Beinn Alligin sports two indisputable summits - one at each end of its easy summit ridge. The difficulties, such as they are, on Alligin involve the traverse of its three 'horns' which grace the north eastern spur of the hill. Today we chose to visit these in ascent, which perversely involves an awkward if well protected descent move on the way down from the final horn before scrambling easily up to the Munro summit of Sgurr Mòr.

Sue and I had set off with Steve, who would spend the whole day with us, and with Graham, Richard and Jenny, who chose the excellent traverse of Beinn Dearg for their outing in the continuing wonderful weather.

Initially we took the wide path up Coire Mhic Nòbuil, where Sue is seen above with Graham, with a Beinn Alligin backdrop. Then after leaving Graham to guide R+J over Beinn Dearg the three of us climbed steeply up through bands of rock, eventually gaining the summit of the first 'horn'. From the ridge we could see the others slowly rising up Beinn Dearg's airy western flank, and we enjoyed splendid views across to yesterday's summits and far beyond.

Sue is pictured in the lower image with Steve on the third and highest 'horn', with Baosbheinn behind them, before we descended more easily than I could recall, to the col leading to the summit.

We felt we had earned our lunch, which was enjoyed at leisure today, with no time pressures to hasten us along our way.

Continuing to the summit, we paused frequently to admire the dramatic outline of the 'horns' below us, and just beyond that high point we halted again at the spectacular cleft of Eag Dhubh.

Soon afterwards we met a couple of Scots on their way to explore the 'horns'. We met only six people all day, and nobody else seemed to be traversing the hill in our anti clockwise direction, though erosion on the summit ridge and on the path in Coir' nan Laogh was clear evidence of its great popularity.

A stroll along the ridge soon brought us up a band of sandstone slabs, to the southern summit of Tom na Gruagaich, where we enjoyed a final slug of tea before descending easily and quickly back to the car park on the Diabeg road.

We noticed the bright yellow flowers of Bog Asphodel on the lower slopes today, and a small yellow orchid appeared amongst the huge numbers of blue and white ones. The large single flowers of Melancholy Thistles occasionally nodded as we passed them in gullies on lower ground, and Mountain Everlasting is abundant in these parts.

On the subject of flora, we've found Ken Butler's 'Wild Flowers of the Northern Highlands of Scotland' brilliant for this trip. It deals with just 250 of the 1500 species found in the area, but of those 250 we've only spotted a small handful of plants.

Anyway, after our 12km walk, with about 1200 metres ascent, completed in less than 7 hours, we had plenty of time for the usual indulgences, including a trip to the Kinlochewe Hotel to sample their tasty draft beer.

You seem to have found a pocket of good weather from somewhere Martin.
Good to see you enjoying some fine rounds. Baosbheinn & Beinn an Eoin in particlar is a fantatistic walk probably overlooked by a lot of people.
Cheers Paul