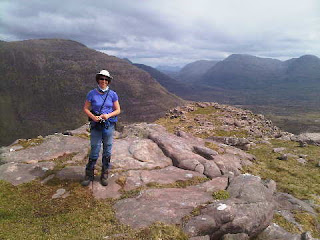 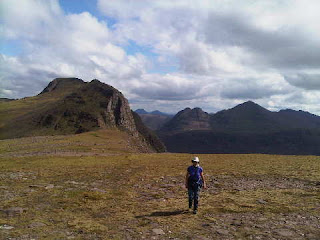 Sue and I set out alone today; others had different agendas. We all enjoyed fine days out in perfect (sunny, clear, no wind, no midges) weather, so everyone was happy tonight.

We started at about 9am from the 'Red Barn' by Am Feur-loch on the Gairloch road. The track to Loch na h-Oidhche is a good one, with information boards and four waymarked routes designed for the more casual traveller in need of a short walk from the Red Barn.

We took that path for 6km, meeting two men on a buggy, with a couple of dogs. These were the only people we saw all day. The stepping stones over the Abhainn Loch na h-Oidhche were high and dry, evidencing the fact that since 13 May, when all May's rainfall fell in one day, there has been very little rain hereabouts.

A few hundred metres beyond the stepping stones, two massive erratics announced the need to turn left. We would now be pathless for many miles, initially over easy ground to reach the ridge by Coire Loch na Geala that rises to point 715 at the northern end of Beinn an Eoin. We were delayed by 'flower stops' after discovering sundew and orchids, and by Sue falling into a bog and covering her legs in a substance that looked like ... sick. Bogs were hard to find today, but Sue was up for that challenge.

The flattish ridge culminated in a short burst of ascent to the summit, from which the views of Torridon and far, far beyond were absolutely magnificent on this crystal clear day. It had taken a little over 3 hours to get thus far.

A pleasantly blunt knife edge ridge took us to the rocky convex nose of Beinn an Eoin, down which we picked our way slowly but entertainingly to a point a little to the left of the bothy at Poca Buidhe, which appeared to be occupied by two dogs!

Lunch was followed by the ascent of a pleasant ridge with widening views, to Ceann Beag, Baosbheinn's 705 metre outlier.

It was still some way to the summit, due to a couple of abrupt gashes in the ridge, but we got to admire those summit views, and enjoy more of our tea and a second lunch, at around 3pm, some 6 hours after setting off from the Red Barn. The upper picture shows Sue approaching the summit, with
Beinn an Eoin behind her and more distant Torridonian giants to her right.

It was a truly magnificent day for this classic round of hills.

Some more undulations delivered us to the pinhead of a further summit, from which the most precipitous descent of the day (walking poles were tossed down to make the downclimb easier) took us to a lovely broad ridge that rose gently to our final 801 metre summit. The views to the Outer Hebrides from here were wonderful, as were the views back to the central Torridon peaks. (Sue is pictured in the lower image on this broad ridge, with our steep descent in the background and Beinn Dearg to the right.)

After lingering with our last cuppa to take in these views, we embarked on a final steep 600 metre descent into the Flowerdale Forest, to reach the thin river known as Abhainn a' Garbh Choire by a small but obvious footbridge. After the first 300 metres down steep but easy grass, the gradient eased but the going became somewhat 'lumpy'. Sue was flagging, but revived when she found a spring issuing crystal clear cool water. We continued over a rocky bluff to a deer fence that was easily climbed at a well used corner, and on to the previously mentioned footbridge. Here we didn't cross the bridge, instead joining the 'yellow' trail, a path marked by posts beside the left bank of the river that took us through more stunning scenery all the way back to the Red Barn. We reached there at about 6pm, 3 hours after leaving the summit of Baosbheinn. The 26km walk (hardly a 'stroll' today) had involved about 1800 metres ascent and had taken 9 hours.

We returned to the Lodge in plenty of time for a cream tea, bath, beers and another fine dinner, after this most satisfying of mountain days.

Yep, simply wonderful. Sounds a gem anyway.
And yet another fine day although it is sunny down here at the moment but quite a breeze blowing.

This is,in my view, one of the best rounds in the Highlands. And to think a hydro scheme was proposed here some years back!

Thanks you two. A cracking walk indeed!