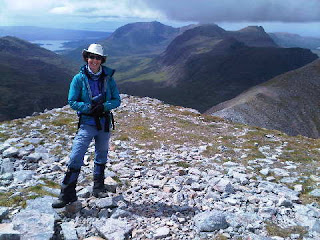 Thanks for your comments on various posts, I'll respond next week when I have more than a weak phone signal.

Today Sue and I had a last minute change of plan when we woke to a gloriously sunny morning. Beinn Alligin was left for another day.

We were joined by Steve for this fine walk up one of the best hills that Scotland has to offer - Beinn Eighe. Whilst we knew from yesterday that Steve is a sound walker, we didn't know how he would cope with a long scrambly ridge. We had only met him on Sunday and he had only walked on a few Scottish mountains. So we decided against tackling the entire ridge, targeting instead the comparatively easy central section.

A car was therefore left at the Ling Hut car park, then we returned to Loch Bharranch to start walking at around 10am. It's a well made path all the way up to Spidean Coire nan Clach, our first summit and Steve's tenth Munro, mercifully clear of cloud although the day's weather had now settled into a rhythm of sunshine and showers.

We enjoyed the 2km ridge walk to A' Coinneach Mhor, from which today's image was taken - towards Torridon, with Beinns Alligin and Dearg.

Lunch had been taken en route, and we enjoyed the friendliest of several encounters on the hill today. Terry Gallaher, training for a forthcoming triathlon event, paused during his run for a chat. We wish him well, and we were pleased to note later that he did find a quick way down from Ruadh-stac Mòr, our own next objective.

By the time we got up there the cloud was down. Despite a long wait amongst strikingly pink beds of Moss Campion, we couldn't persuade it to clear, though eventually the rain eased and our waterproofs could finally be stashed for the day. That left us relatively unencumbered for the steep descent to Loch Coire Mhic Fhearchair, where we enjoyed our last sip of tea, with some CCS (shortbread), in view of the mountain's magnificent triple buttresses.

An easy amble around Sail Mhor to Coire Dubh Mhòr, all on an excellent path with fine views of Liathach's spiky ridge, brought this 18km excursion to a most satisfying conclusion by about 6.30pm. The route involving 1300 metres of ascent had taken us all of 8.5 hours, but we were back at the Lodge in time to enjoy tea and cake and a hot bath before tucking into a delicious joint of lamb.

Ten of the others arrived back at the same time as us from a successful walk up Slioch, on which the main point of interest seemed to be Richard's failed attempt at a cartwheel. He was just a little battered.

Great mountain, it looks stunning from all angles. Very envious. You have certainly had some good weather of late.