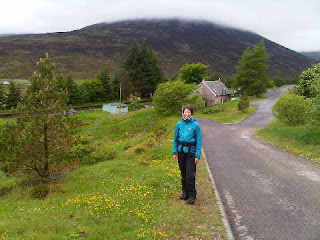 This four and a half hour walk was really just a leg stretch on the short journey from Pitlochry to Kinlochewe.

With the cloud base at 600 metres we were never really going to see very much, but the flora and fauna kept us entertained all day.

A bleep from the phone brought sad but not unexpected news from Southport. Kate Wood's battle against cancer had finally come to an end. Our thoughts are with Tim and the family. Later we were to pass the point in Kingussie where we first met 'Little and Large', on the TGO Challenge in 2008.

The mist brought a few surprises - red deer, startled by our presence, lots of frogs and froglets, some red grouse chicks instinctively hiding from us as their mother pretended she had a broken wing.

There was lots of other bird life, in particular around Loch Garry - including oyster catchers, lapwings, ringed plovers, the usual mallards, common sandpipers, and a fly past from some greylag geese.

By the time we got down the rain had eased, but I'd established that my old waterproofs are now due for recycling, a bit like Mike's car (anyone wanting to get rid of a good runner for up to £1500?).

Others enjoyed longer walks, and we were first to arrive at Kinlochewe Lodge, at 5pm, apart from our catering department - Louise and Liz, who have now established themselves as an essential resource, having provided our group of eighteen with a superb meal.

Pictured: The Sow of Atholl from near Dalnaspidal Lodge (which is undergoing an impressive looking refurbishment).

Sent using BlackBerry® from Orange
Posted by Phreerunner at 23:02