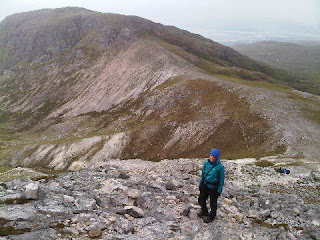 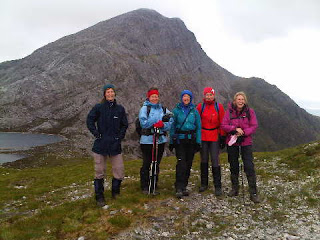 Thus it was that after waving goodbye to Steve, Jenny and Richard, who were heading off today, ten of us drove through light rain to Coulags, where it wasn't raining.

The path up to Bealach a' Choire Ghairbh, past a rather smart bothy, is a delight, from near sea level to around 600 metres without really noticing the gradient.

From the bealach the path steepens to reach the Munro summit of Maol Chean-dearg (933 metres) rather more easily than the slabby route up the neighbouring Corbett - An Ruadh-stac (892 metres). Both are fine hills, but today their summits were only intermittently revealed through the cloud. Our summit photo was, for the first time for a while, without a view, although it was warm and calm enough to enjoy our lunch around the massive summit cairn, which for many of us featured large slabs of Louise's alcoholic chocolate cake.

A pair of ptarmigan were on hand to inspect the site and join the mice in a hunt for Sue's dropped crisps.

An uneventful descent concluded our travails in this part of the world for the time being, though others in our group are continuing to other parts of Scotland in an ongoing hill climbing frenzy.

Today's 17km included about 900 metres ascent and took around 6.5 hours.

As soon as we set off from Coulags the rain started again. Sue thinks she saw an otter swimming in Loch a' Chroisg. Julie had been on a short walk slightly to the east of us; it had rained all day there. The ten of us had been very lucky.

We've also been very lucky to have Louise and Liz as our catering department. They have fed us like the Lords and Ladies who are their usual clientele, finishing tonight with Mull scallops, haggis-neeps-n-tatties, apple crumble, and the usual fine cheese board.

I'm out of time now, so you are spared more fauna, flora and geological etc stuff - until next time! We travel home tomorrow, and some 're-grouping' will be required before the next trip.

Today's photos were both taken near Bealach a' Choire Ghairbh, the first showing Meall nan Ceapairean, which I'd planned to climb but didn't, with the second picture of today's girlie contingent (Sue W, Tove, Sue B, Ruth and Carol) in front of An Ruadh-stac.