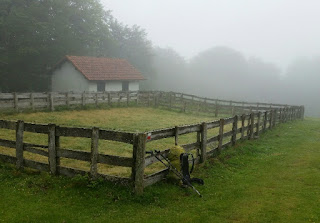 Weather: woke in a cloud, spent most of the day in a cloud, rain all day (what do you expect from a rain cloud?)

It took me an hour and a half from waking at 7.20 to leaving the campsite with a view I never saw, partly due to faffing with emails and other stuff in the confines of the tent.

I'm sure there were great views from today's high ridges, but the Basque country likes to keep its little secrets.

I made my way uneventfully over well grazed turf, following waymarks that appeared through the mist if you looked ahead with optimism, to reach the road at Puerto de Urkiago in a little over two hours. This is the end of Stage 3 in my guide book, but there are no facilities and wild camping would be difficult. There is accommodation, with free transport, at a hostel 6 km down the road.

The woodland path from there passed some impressive concrete bunkers. One of them comprised a tunnel about 10 metres into the hillside, then a right angle turn to 50 metres more tunnel, and given the presence of padlocked doors I suspect it was much more extensive than that.

Nearby, two men were chopping their way through a vast pile of logs in the rain.

The path rose to over 1200 metres again. Not a pleasant place to be today, albeit only a t-shirt was needed under the waterproof jacket. The slithery plunge through steep woodland to the Barrack Odia wasn't all that pleasant. Nor was the bridge at the bottom - shaped like the top of a small sphere, I had to hang onto slippery wooden railings to avoid sliding down from the apex.

Soon after that, Albergue Sorogain provided a hearty eggs and ham lunch, the energy from which I needed to get through the rest of the day.

First, there was a fairly brutal ascent to the top of a hill at 1181 metres. Then, and this will amuse Gibson if he turns to page 54, I mistakenly navigated from the top half of the page, not realising that was the morning's route. I even noted some 'incorrect' heightings! So I was on line 9, turning right and dropping down steeply when I should have been going straight on. I bumbled about for quite some time, gradually getting more frustrated until after half an hour I realised my error and returned to the fence with a stile. It didn't help that my GR11 strip map shows an old route that I may have been on, but even that is no excuse for heading west.

The  summit of Menditixipi, at 1213 metres, may be a good viewpoint. I was there but I wouldn't know.

Soon after the less than dramatic summit I got a shock. Having seen nobody all day, I suddenly found myself walking next to another rucksack clad hiker. This was Mitxel (Michael in Basque). He is on his first long walk at the age of 60, having got his children off his hands and sent his wife to work (the latter are not his precise words). He is ardently Basque, living in Bilbao, whose football team he admires. We walked and chatted all the way to Burguete (also known as Auritz, its Basque name). Mitxel walks a bit quicker than me and his English is good but limited, so whilst we may not walk together again we may enjoy the occasional encounter. His ardent Basque identity contrasts with my comfortably regarding myself as European.

I found the Hotel Loizu and Mitxel went off for a beer, then he may sleep under a plastic sheet in the churchyard. He says he is not strong enough to carry a tent.

Washing is done and hopefully drying, and it's now time for dinner.

I hope to be able to transmit this sometime, but my emails and Internet connection aren't currently available - it seems the server doesn't want to talk to me. 'No response from server' is the message I get. But if this does ever see the light of day I must have got a response!

Today's pictures:
A typical hunting cabin scene
Mitxel on the descent to Burguete

Pity about all that mist and rain Martin. I'll need to be 'amused' later since the book is not due for delivery until Monday, not that I feel I'm in a position to be amused at all. I might still have been walking west.....

Re-reading your GR10 book I get the distinct impression that the GR11 is a rather harder proposition from the outset. The 'spherical bridge' sounded particularly dicey.

Take care and may the sun shine on you soon. I am really enjoying your trip reports.

If one can find a silver lining in all this mist and rain, at least when you first get a full day of sunshine and clear views it will seem all the sweeter for the wait!

Received your text messages, glad to see that you're sorted and that the trip is going well!

Thanks all, from an excellent café in Orbara.

The Silver Lining has arrived, Gayle - I knew it would!

Gibson - I hope you laugh as much as I did when you see the mistake I made.

These initial stages of GR11 are definitely longer due to the spacing of the villages being greater than on the French side, but for campers it's easy to split the days so long as you carry water. Overall I think GR11 is shorter, with less height gain...

Mitxel's rucksack looks rather large for not carrying a tent. Perhaps he would benefit from one of your renowned kit inspections!

Rain covers can make rucksacks look larger than they really are, Sue. And he was moving too fast to warrant a kit inspection. But sleeping under a plastic sheet... I expect he was off before I'd got up. His main pleasure in seeing me was that I was older than him, so he could report back to his family, who had told him he was far too old to embark on such a caper.

In remember passing through Burguete on the second day of our first week on Camino Frances a couple of years ago. Having just returned from the 3rd and final section, this brings back many memories.

Keep up the good work walking and posting!

Thanks Jules, it'll be a pleasure to have your vicarious company for the rest of the journey.