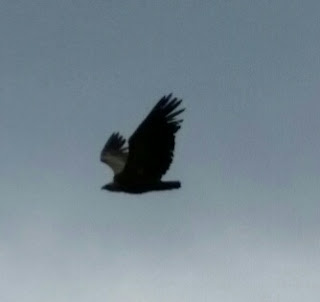 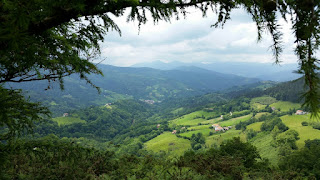 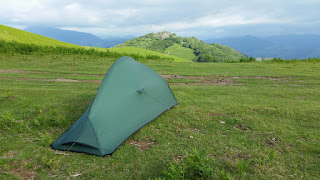 After yesterday's deluge it was nice to wake to the sound of .... nothing. Camping next to a cattle grid had produced the inevitable - a flock of sheep who would prefer to be the other side and were going to broadcast that fact as loud as they could. It was quite amusing although I was on the same side as the sheep, who eventually wandered off into the rainy night.

It took me just an hour from getting up at 7 to leaving at 8 for the pleasant ridge walk down to Bera, a sizable town.

Jays were floating in and out of the trees, whilst Griffon vultures were gliding above them. They came very close. I must have looked like carrion...

I stopped at length in Bar Miljar in Bera, after entering the town via an ancient bridge with a memorial plaque to the men of the Rifle Brigade who died defending the bridge from the French in 1813. Avenues of plane trees then led to the town centre.

Socks and trail shoes, soaked from yesterday's rain, were slowly drying, and a sort out in the café failed to reveal any other wet items. The 'new dry bag every year' policy had worked. The Keen trail shoes had kept my feet dry for most of the day but had given up towards the end.


From Bera, a hot ascent to the summit of Santa Bárbara had the sun tan cream out for the first time. Shorts and t-shirt had been deployed early on and were ideal for today.

The paths were excellent. Most would fall into 'bridleway' or unsurfaced lane categories in the UK. A few motorbikes and trial bikes were using them. Fair enough, the riders were polite.

Hunting towers, rickety as ever, appeared at intervals, as they had yesterday in this rolling, forested landscape that always reminds me of mid Wales.

A couple of day walkers were seen after I'd lunched on a grassy sward beside a track lined with foxgloves and lizards. Then I came across a couple, relaxing in the grass below the Usategi bar-restaurant (closed), a give away Cicerone guide beside them. Tobi is from Germany and Carol is from the USA. This is their first major backpacking trip so they are learning as they go. They set off on GR11 on Monday, but had a very short day yesterday after they reached Bera during the deluge and had the sense to find a hotel.

They are camped next to me tonight on this broad col where my tent is shown. It was well worth carrying an extra two litres of water for three hours to be able to halt at this splendid spot. Though (and Conrad's right) I do hope the jangling horse bells will take a break at some point - or maybe they'll just lull me to sleep in the absence of the sound of running water. The shepherd has visited and he doesn't seem to mind us being here. "Aren't you cold?" he asked!

Both vultures and red kites are investigating our presence.

Other features of the day:
- The route is very well signposted - a map is arguably superfluous as each turn is also described in the Cicerone guide.
- Eyebright and Mullein lined many of the hedgerows.
- Black redstarts and many other small birds appeared to cheer as I passed their gorse top perches.
- Horse flies were briefly encountered; the first of many? Thankfully both campsites have been insect free.

Back to Index
Posted by Phreerunner at 06:27

One hour to get going sounds good. People who don't do this would be surprised how long it seems to take. Do you pack your rucksack inside the tent? If the weather is fine I prefer to have more room outside. Doing it in the tent has become ever more arduous, as my aged frame becomes less flexible.

I saw many of those vultures early on during my GR10.

Good shot of the Vulture. You are matching us for weather so far. Its all very green and very nice.

The 95th rifles." The chosen ones" made popular in the Sharpe books may have come through Bera.Did it have the brigade number on that lovely bridge.

This is all very interesting Martin and you're making good progress it seems - progress I'll be following with particular interest. On the move in an hour is good going as Conrad says.

Just referred to my round Wales journal following up on a comment on Ruth's blog (Coastal Walker) and came across this:

"I awoke at 5:00am and departed at 5:45 after a mild midge attack. I think 45 mins. was probably the fastest time I achieved for toileting and packing up in the morning. It is an irritatingly lengthy process".

Thanks for your comments. Conrad, in wet weather I pack everything whilst inside the tent. The rucksack has a 'bottom entry' that can be opened later to stash the wet tent. In dry weather I actually find it less of a faff to sit in the tent and stuff most items in the rucksack than keeping bending and reaching to pull stuff out and plonk it on wet grass. I've also had some very fast escapes from midges!

Alan, it was the 2nd Battalion of the 9th Rifle Brigade, many of whom died on 1 September 1813 defending the bridge against the French. After being defeated at San Martial the French reached this narrow bridge over the River Bidasoa, which was in flood after a storm. This sole crossing point was defended by just 70 of the green-jacketed riflemen known to readers of Bernard Cornwell's 'Sharpe' novels (or apparently TV films starring Sean Bean). Captain Daniel Cadoux and his men held firm against 10000 French troops for 18 hours. Unfortunately there request for support from General Skerret's Light Brigade, camped just a mile away, was refused and many of the Rifle Brigade were killed when they were finally forced to retreat and release the French from the trap

No interesting tractors yet, I'm afraid!

Gibson - hello, there are no midges daft enough to be sitting in this cloud! It may be another slow start tomorrow, but socks and t-shirt may crawl out first in search of that hotel sink...

You have a good memory Martin.

Before Gibson points this out! It's mostly in the guide book, Alan!