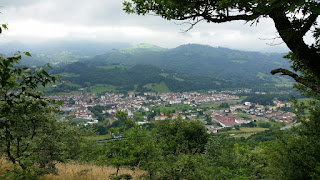 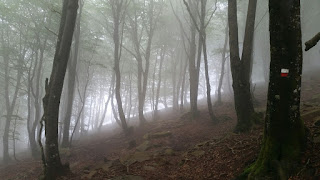 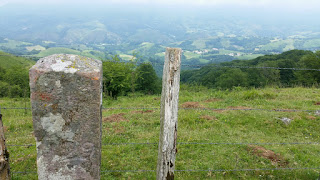 Weather: woke in a cloud, overcast all day with cloud base 900 metres, hence camping in a cloud tonight

Another good day's walking on excellent paths. If anything I prefer this route to the French one, but are the first few days quite tough compared with the HRP and GR10, or am I feeling my age?

Waking in a cloud doesn't do much for inertia. So today I found enough to occupy me for two hours before leaving after a chat with Carol and Tobi, who were even more leisurely than me. I set off along the track without a care in the world (as they say). Soon I did care about the fact that I was heading west rather than south. Rather than continue towards the coast, which I thought had disappeared for good once I'd left Irun, I returned to the two campers to find them quizzically looking at their map trying to decipher the route and wondering why I'd continued along the track.

The GR11 signpost appeared briefly through the cloud. Problem solved. I'll try to be more careful in future.

Pleasant woodland paths with lots of bracken led eventually to a picnic spot that would have been much too far to go to fetch water for our campsite. I continued past Bell Heather, Brambles, White Clover, Trefoils, etc and down to the small town of Elizondo. The supermarket provided a few items that were running low, and a later than usual visit to a coffee shop saw me enjoying a hot sandwich rather than a croissant with my 'café con leche por favor'.

From that café, on the corner where GR11 heads right, I went up past the church, after which a relentless ascent climbed over 900 metres up old packhorse and hunting tracks past orchids and tormentil to the cloud in which I'm now ensconced. It's pleasant enough - I just can't see anything. It's another 'dry camp' to which I've had to bring enough water to last the night. I only had to carry it for a steep thirty minutes today.

On the way I passed a few of the 600 or so boundary stones placed across the border with France in the 1860s. That was after the Treaty of the Pyrenees was signed in 1659 to end the 1635-1659 war between France and Spain, but the border wasn't properly settled until the Treaty of Limits in 1856.

Interestingly, the only views today from the high ridges, albeit limited, were into France. Spain was completely engulfed in cloud. It's usually the other way around. But I suppose this is the Basque country.

Other features of the day:
- Goldfinches in the hedgerows and more vultures and kites and other birds of prey.
- A lone person ahead of me - true or was it an illusion? There are quite a few footprints in the ubiquitous mud.
- Two backpacking girls coming the other way at Collado Zaldegi. "Where are we?" They spoke English; I spoke 'map'; everyone was happy - but I didn't envy them the long walk down to Elizondo! They should be there by now.
- Above 900 metres, above the tree line, in the mist... just like the Yorkshire Dales. Why have I come all this way just to see countryside like mid Wales or Yorkshire?

Today's pictures:
From the descent to Elizondo
Woodland *
Border stone 129 and the view into France

* At this point, despite the mist, I felt at one with the world. Warm, dry, knew where I was, with others to find me if I slipped (which I immediately demonstrated), in beautiful surroundings. ..etc

Have I only been walking for three days? It seems longer!

I've bought the Cicerone Guide so that I can follow your journey, though at £16 I should really plan to do/attempt
the route. Need to persuade Lynne.

Not being a seasoned traveller I'd be tired for days if I had a 22 hour journey to the start.

Love the trees in the mist! You have a highly rated hotel for tomorrow night, booked by a phone call after I failed spectacularly to use Booking.com. I might need a fight with the Cookies, but why was my email address rejected on both the PCs? Perhaps JJ will be able to help when I'm back! Missing you already...

Wow Gibson, that's impressive, though the book doesn't quite convey the ambience of sitting in a tent in a cloud at 1150 metres drinking the Links (Montrose) Hotel's finest cappuccino with only cawing crows and the huff and slash of the storm to listen to.

Never mind, Sue, I'm sure Booking.com can survive without us. I'm looking forward to that hotel!

The book just helps me to locate you in a region that is unknown to me.

Gibson, you will appreciate the benefit of having the book when I tell you that last night I was camped about 200 metres to the left of the stile mentioned on line 13 from the bottom of page 50, using the fence as a 'handrail' to return to the path this morning. And I've celebrated some interesting but successful navigation through today's fog with a large plate of eggs and ham at Albergue Sorogain (P54). No English spoken here but the menu helpfully said 'egg and ham'.

Good idea, the book, Gibson. I may well nip out to waterstones tomorrow afternoon.
:-)