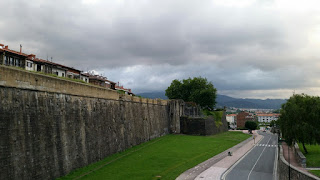 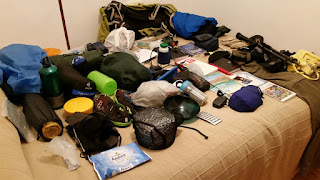 Weather: cloudy until south of Paris, then light rain, then vaguely sunny, then a showery evening

I set off from Timperley at 10.30pm last night. It was strange to be without Sue. Quite different from the feeling when she went home from Luchon in 2013, leaving me to continue along GR10 with Graham.

The midnight bus to London Victoria from Chorlton Street turned out to be tolerable. The brand new bus arrived in London an hour early, at 5.30, despite pausing between 2 and 3am in Birmingham.

That gave me lots of time to squander with a coffee etc before hopping onto the 7.55 Eurostar to Paris.

'Henry in Trouble' - I remember reading a Thomas the Tank Engine story in which Henry breaks down and Thomas comes to the rescue. We could have done with Thomas today. By the time our broken Eurostar had limped back to St Pancras and we'd transferred to another vehicle we had lost over an hour and there was no chance of me getting my connection to Irun.

Eventually we arrived in Paris nearly two hours late. There was no hurry for me as I was told the next train to Irun was the overnight service leaving after 9 pm and taking twelve hours. So much for tonight's hotel booking.

My ticket was endorsed by the guard 'Eurostar delayed - Hop on the Next Train' and I used a left over Metro ticket (thanks David R) to get to the Montparnasse station. Waiting to get a replacement ticket to Irun, I spotted a '14.21 - Hendaye' about to depart. Hendaye is very close to Irun - an acceptable destination. After some debate with the ticket clerk and her boss it was agreed that I could travel on this more expensive route via Bordeaux. Within minutes, a long afternoon in Paris and a second night of travel had been replaced by a TGV whizzing through the damp French countryside.

Hendaye is on the French side of the border with Spain, south of Biarritz, with Irun very close across the border. I expected a short taxi ride to deliver me across the border and through Irun to my hotel, Txoko Goxoa, in Hondarribia. And it did just that, together with another English chap on a work visit who turned up just as I was negotiating with the driver.

Great - I made it in time to have a good chat with 'Patchy' at the hotel, then get some dinner at his recommended restaurant, Zuloaga. (I can't get used to these weird Spanish names.) These days I find it handy on such trips as this to spend the first night in a hotel where I can spread everything out and change my rucksack configuration from 'travel mode' with everything including walking poles inside the sack, to 'walking mode' in which many items such as water bottles, waterproofs and snacks are more to hand.

Gear for this trip is trusty old gear apart from some new Berghaus Paclite overtrousers that I know from previous experience will be ideal.

Dinner was excellent - cod croquettes, perfectly cooked hake in green sauce with clams, washed down with half a litre of nice rosé, etc. It's a 'good food' destination.

I didn't get much chance to take pictures today, not really being in the mood until I reached here, so they comprise Hondarribia's walls and harbour, and a rather uninformative snap of my gear, most of which is unidentifiable in bags. The psychology behind the picture is the weight involved - over 15kg. If I brag about it perhaps it won't seem so heavy!

I'm sorry if it seems like boasting but you did quite well compared with my start for the GR10:
Lancaster Stanstead bus departed 3:00 am ish from a different stand than the one I had recced the day before so I missed it.
Phoned bus company.
They agreed to hold bus at Preston.
Found a taxi in Lancaster at 3:00am.
Drove to Preston and caught bus.
At Stanstead French strike dictated plane to Biarritz cancelled.
Had to find b and b near Stanstead.
Next morning best I could do was fly to Carcassonne.
Train from Carcassonne to Bordeaux.
Hotel overnight in Bordeaux.

As they say on the train "make sure you take all your belongings with you and have a safe onward journey - mind the gap".
Train to Hendaye next morning.

Sorry - last line got transposed to end instead of after "Hootel in Bordeaux..."

Haha - did you leave something en route Conrad, or did you slip down a gap....? I'll try to avoid those traps...

An interesting journey that one - you must have felt quite down at times unless you're made of tougher steel than mine.

I was lucky to spot the train via Bordeaux just at the right moment.

Well,that could be the hardest bit of the trip Martin. The Adventure begins....

Firstly - the very best for what's going to be a mighty journey!

Title is "The Invisible Guardian", by Dolores Redondo. It's a very readable detective novel set in Elizondo - where you'll be shortly. The translation is excellent.

To download it you'll have to have installed the Amazon app - also available from Google Playstore,if you don't have it already.

From the blurb:
A killer at large in a remote Basque Country valley , a detective to rival Sarah Lund, myth versus reality, masterful storytelling – the Spanish bestseller that has taken Europe by storm.

The naked body of a teenage girl is found on the banks of the River Baztán. Less than 24 hours after this discovery, a link is made to the murder of another girl the month before. Is this the work of a ritualistic killer or of the Invisible Guardian, the Basajaun, a creature of Basque mythology?

30-year-old Inspector Amaia Salazar heads an investigation which will take her back to Elizondo, the village in the heart of Basque country where she was born, and to which she had hoped never to return. A place of mists, rain and forests. A place of unresolved conflicts, of a dark secret that scarred her childhood and which will come back to torment her.

Torn between the rational, procedural part of her job and local myths and superstitions, Amaia Salazar has to fight off the demons of her past in order to confront the reality of a serial killer at loose in a region steeped in the history of the Spanish Inquisition.

I've splashed out on the book, and when you have wifi Martin, it will appear on your Kindle! It might hold the current record for the most expensive Kindle book yet - over £9! I look forward to reading it too.
Thanks Humphrey.

Buena suerte! Looking forward to reading all about your Spanish adventure.

Thanks HMP3, and hello Nick and Sue.
I'm commenting from Bera (no wifi), before heading towards Elizondo. I'll be wild camping before the village - I hope the murders have been solved - that book will make a welcome change from Wolf Hall (now 34% after 2 months!).

Whilst you're off galavanting in foreign parts, I do hope Sue will be putting her feet up, dining in little tavernas in Timperley and generally having a splendid time.
:-)

Yes of course Alan. You'll get the drift when you get to the entry for 29 June...

Humphrey's reading suggestion was excellent - The Invisible Guardian watched over me whilst I read a chapter a night at bedtime.