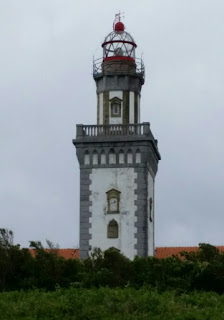 Weather: light rain at first, deteriorating to monsoon like conditions; I noticed the temperature was 11C at one point, though it's a comfy 14C in the tent at 8pm, still raining but the blackbirds are singing

After yesterday's 22 hours of more or less constant travel, and the euphoria of arrival into a small but perfectly formed bedchamber and an excursion to a classy eatery, today was somewhat of a contrast. After two days of very little exercise, any shortfall on that score was certainly eliminated.

I took my time getting sorted out after a good sleep, then wandered down to a café for coffee and a croissant. My waterproof jacket was soon needed, but the trousers remained stashed until after I'd officially started GR11 from above the beach beyond the lighthouse. The lighthouse, pictured, is about as close as you get to an official start.

There were luscious strawberries and banks of a white flower with just three petals and dark green leaves. Dripping. (Perhaps a Trillium [a North American and Asian plant] escaped from former ornamental gardens?)

By the time I got back to Hondarribia I was also dripping. I sought refuge in another café for half an hour - enjoying one of the biggest and best chocolate croissants that I can recall.

That was after finding a hardware shop (Marinel) that sold me a large tub of camping gas, thus obviating the need for an excursion to Decathlon in Irun. Very handy - solving the only ongoing problem from yesterday's Eurostar delay. I had been planning to buy the gas after my original train had arrived in Irun, before going to the hotel.

It won't take long to relate my encounters after leaving the streets of Irun and lunching under a motorway bridge in view of the first GR11 information board I'd seen. One mountain biker passed me, and I passed a small tent near one of several totally deserted picnic grounds. That's it.

The camera was stashed in a waterproof bag fairly early on, so there are no  photos between Hondarribia and Ermita de St Antón, where a covered seating area enabled me to sort my map etc out in the dry. Here I decided to fill my water bottles and walk up what appeared to be a stream bed but was possibly a path, to the col where I'm now camped in the shelter of some trees. I could have continued to Bera, but I'd have arrived late and maybe have struggled to find adequate lodgings. Anyway, I fancied camping despite the weather, and my food mountain could be reduced.

The views may have been good, had the cloud base been higher than 200 metres. When it did clear a little through the rain there were mainly steep sided hills clad with trees and a liberal daubing of mist. Quite atmospheric really...

Cattle cowered next to cow sheds, but on the way to this col I passed a group of goats and Shetland ponies who looked a bit more cheerful. They'll probably visit me tonight...

Unfortunately the Solar Competition tent pitches tent first, so whilst it was only subjected to the deluge for a minute or two, there was quite a lot of mopping up to be done once the flysheet was in place and the rucksack was inside.

Anyway, that's all done, it's now 8pm and I've succeeded in reducing the weight of my load a little. It seems to be getting dark so I feel a long sleep coming on.

Back to Index
Posted by Phreerunner at 09:42

Something there reminded me of a familiar happening in the Pyrenees. You spend a couple of hours ascending and, feeling proud that you think you have "gone high", you emerge onto a plateau where cows are grazing and everything is embarrassingly domesticated.

Good to see you have made a start. I can feel the weight of that rucksack from my comfortable study here in Arnside.

Jolly good - raining here too. Did you manage to find a screw on gas cylinder or have you an adaptor to convert the pierce type? Seems that your Spanish vocabulary is in ascendancy. Muy bien.

Conrad - camped next to a cattle grid and near a farm - what could I expect. It was fine though, lovely flat grass and no complaint from the farmer.

Alan - I bought an MSR stove for our HRP trip in 2004 that fits both Camping Gas (non piercing variety) and our screw in cylinders. It's the only stove I've used since then and it often has to deal with both types of canister. The giant canister does however render my windshield useless. Luckily there's no wind!

Mmm i must take a look at that.

It's an MSR Superfly stove. I've given up with the auto-ignition - it breaks very easily - but my stove has now been going strong for 11 years. One of my oldest and most reliable bits of backpacking kit.