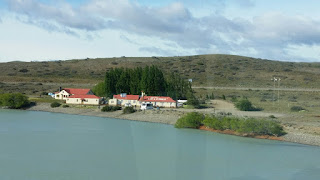 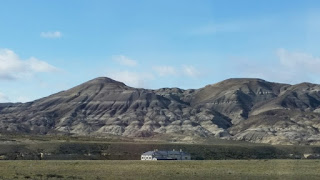 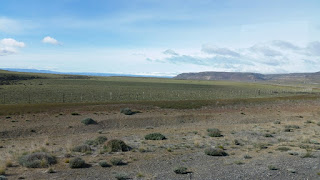 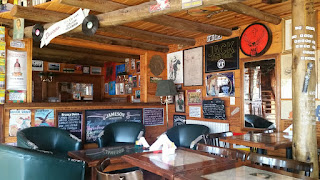 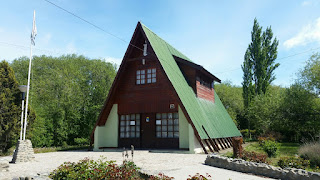 Snow plastered peaks are slowly left behind as we move from rain to rain shadow on the coach ride back to El Calafate.

The driver sheds three layers of clothing and consumes a flask of maté provided by his mate.

Cattle, horses and sheep chew on the tough grasses of the steppe as we travel alongside Lago Viedma.

Herds of Guanaco and flocks of rhea are passed. Apparently the male rhea look after the chicks. We spotted one surrounded by a kindergarten of twenty or so.

I ponder the size of the 'lamb' in last night's stew. A 'micro-lamb? Or a large guinea pig?

Flamingos paddle in the roadside ponds.
Dessicated corpses straddle the low fence beside the road. Guanaco can't be good hurdlers.

Our view back across Lago Viedma reveals a rainbow where Fitzroy should be.

A quick break for coffees and a potato fritte at Hotel La Leona, then on past barren wind sculpted formations rising gently to maybe 1000 metres above the road.

White fronted geese and colourful birds of prey line the verge as we approach our destination.

We reach El Calafate by 11 am. Time for the most expensive coffees* of the entire trip (including Paris).

Then it's a short stroll back to America del Sur Hostel.

* A redeeming feature was a row of books on which shelf I found a volume called 'Six Great Ideas' published in 1981 by Mortimer J Adler. Academics like HMP3 may remember it. It reminded me of some US based management courses I attended around that time. According to Adler there are three ideas we judge by - Truth, Goodness and Beauty, and three ideas we act on - Liberty, Equality and Justice.

I rest my case!

Hopefully not guinea pig, but it is a possibility I suppose. Remind me what mate is? Not alcoholic?!

Maté - herbs in a cup, over which hot water is poured. The resulting infusion is drunk through a straw before the cup is passed to the next person. Just like whisky in a quaich!