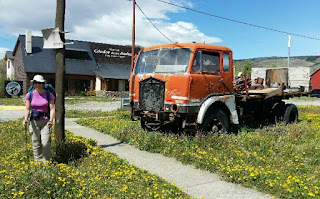 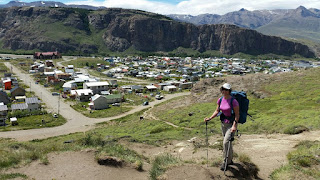 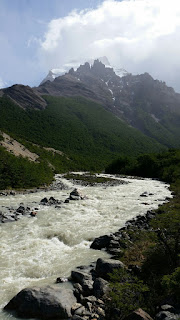 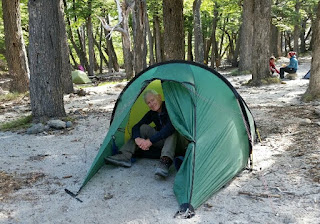 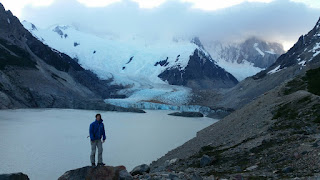 Cerro Fitzroy is the 3405 metre high iconic granite rock that dominates the northern part of Los Glaciares National Park in Argentinian Patagonia. This three day excursion sees us attempt to walk most of the paths in the area, which is one of the two most popular trekking destinations in Patagonia.

Following on from our brief posting after arriving in El Chaltén, I should just mention that this is 'Butch and Sundance' country. About half way along our 220 km journey, our bus pulled in to Hotel La Leona. It was pictured there in the last posting. This place is ideally situated to do a roaring trade by way of a coffee stop for travellers between El Calafate and El Chaltén. That wouldn't have been the case until fairly recently, as the tourist resort of El Chaltén dates from as recently as 1985.

Back in 1905, before the tourists arrived to fawn over the giant pinnacle of rock known as Cerro Fitzroy, Butch Cassidy and the Sundance Kid, together with Ethel Place, stayed here for about a month before leaving for Chile. That's what they say, anyway. Bruce Chatwin also mentions the trio on numerous occasions in his 'In Patagonia' book, but he has the trio in Rio Gallegos in January 1905, and he refers to Ethel, the beautiful gun-toting moll, as Etta. He does however have them back at an English estancia in Argentina later in 1905 before they returned to Chile, so the two stories may mesh.

We walked up the signed trail to Laguna Torre. It's a 10 km stroll through lovely scenery, with open scrubby land interspersed with forests of southern beech trees. The trees are mainly on the dwarfish side, so they don't obscure the views too much. Strange birds sang sweetly as we passed through their territories. Rio Fitzroy roared like an angry lion, especially when the not inconsiderable wind caught it.

A pause for lunch. Crisp bread and sardines. Excellent. Nearly half way along the trail we came upon Peter and Dorothy. Peter's camera battery had just expired again. Luckily we've left Sue's charger in El Chaltén for him to borrow. We chat at length. We will see them again, if not on this trip.

Soon after 4 pm we reach Campground Agostino, the only place that we are allowed to camp hereabouts. There is a toilet a bit like the ones found (if any) in London car parks. The pitches are flat patches of sand. They are in woodland so sheltered from the main blast of the wind, which increased as we approached the moraine at Laguna Torre.

Quite acceptable for the price. (0 Pesos)

The tent remained open for a while, but a thin veneer of sand soon covered our belongings. The woodland view was not to die for, so we zipped up and enjoyed the pleasures of a meal in the tent.

Pause for digestion. Aided by a 4 km return trip to view Laguna Torre from the moraine leading to Mirador Maestri.

It's great to be in the tent. One of our favourite places. And tonight there should be no barking dogs or noisy washing machines. Just the rush of the river and the puff of the breeze.

We deemed it too hot for our usual dessert of angel delight, though a lack of milk of any sort is more likely to blame.

Sadly our efforts to get a clear view of the summits above Laguna Torre didn't succeed, though the glacial scenery and the bases of the peaks made our evening stroll worthwhile.

Today's pictures:
Outside the hostel in El Chaltén (for Alan, the closest we could get to a tractor
Leaving El Chaltén
Rio Fitzroy
Camping at Agostino
Laguna Torre

I presume that first photo is the nearest you could get to a tractor?

I'm a big Angel Delight fan - pity about the milk. I have carried powdered milk in the past, but it doesn't work very well - you seem to need more powder than you think to make anything decent.

Yes indeed Conrad. The closest we could get to trying to keep AlanR awake.

I take instant whip on all my UK backpacking trips, with a carefully measured bag of dried milk for each serving. It works fine for me but it's a real pain when Sue comes along and we share one packet!

How did the hot choc match up to the Dolomites? I thought the sand around your tent was snow until I read your text.

The hot chocolate was from a sachet, Jenny. Very nice, but not in Dolomites mountain Refugio class.