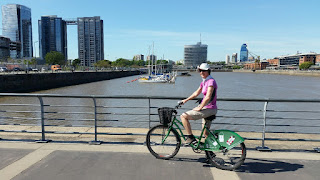 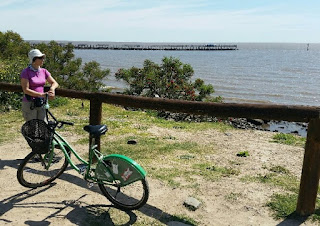 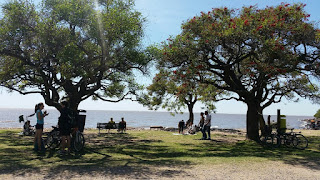 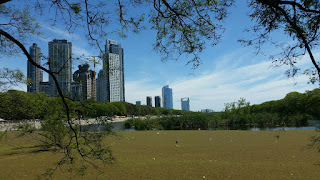 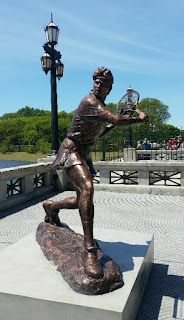 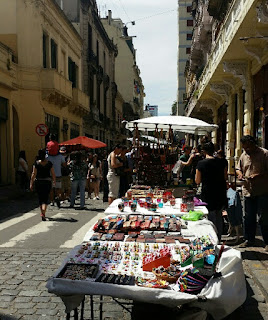 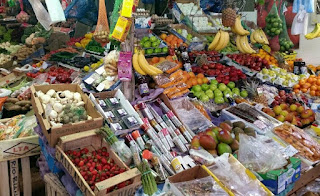 Another blue sky day. We must make the most of it!

After another buffet breakfast and a few minutes sorting out a taxi and checking in for our next flight, we recovered Juan's  BA Bikes from the courtyard and peddled down a roughly cobbled street with old tram lines to the Waterfront. It's a regenerated area that looks a bit like an upmarket version of Liverpool's attempt at 'regeneration'.

Just beyond the waterfront is a nature reserve very similar to the one we regularly visit near Puerto Pollença in Mallorca. Today there were lots of joggers, cyclists and walkers scaring off the wildlife. No crested coots here, but we did spot some giant turtles.

A flotilla of yachts filled part of the ocean horizon, seemingly enjoying a Sunday morning race. Or were they off to reclaim sovereign lands?

Anyway, Sue and I pootled gently around the earthen tracks of the reserve, trying to keep below the 10 kph speed limit.

The waterfront overlooking the nature reserve is home to a series of fine bronze sculptures of famous Argentinian sports stars. Gabriella Sabatini is pictured. I'm sure there must also be one of the inestimable Maria Bueno.

Several rests and coffees in a shady bar later, and we were back on Avenue Independencia and returning to BA Bikes, which we highly recommend.

The guys at BA also explained something that had been puzzling us. Maté. We'd seen people filling cups with hot water or orange juice, then drinking through a metal straw, often sharing the cup with others. Juan's team explained that the cup is filled with a thick bed of herbs, so it's similar to drinking herbal tea. We shared his cup by way of a demonstration. We explained that the Scots do something similar (without the herbs) with whisky, shared by way of a quaich.

Wuxing Nick's food recommendations were starting to overwhelm us, so we headed to Gran Parrilla Del Plata, which we'd discovered is a highly recommended steak house near our hostel. "Fully booked" was the answer we were expecting, but our 12.45pm timing was immaculate as we were allowed to sit outside where they don't take bookings because of the vagueries of the weather. Luckily today's conditions were perfect for al fresco dining. Five minutes later all the tables had been taken.

We enjoyed the meal, though steak doesn't head either of our 'must have' lists.

We learnt a few things. "Expensive" may mean that it is relatively pricey compared with other places, but our lavish lunch with a bottle of Malbec and complimentary drinks to finish cost less than £15 each. We learnt to share a salad - we actually got that bit right. We also learnt that one steak dish between the two of us would be plenty, and might even leave space for dessert.

We are in the San Telmo district, famous for its Sunday market. And what a market! It seemed to extend for miles, eventually petering out beside a pleasant park, Parque Lezama.

After re-grouping with the aid of a bottle of water we made our way back through the hordes to El Zanjon, a house with a rich history. The conducted tour took us through the ages from when the plot was on the edge of the embryonic city in the 18th century or much earlier. After independence a rich Spanish family built its residence, complete with watch tower to keep an eye on the nearby shipping, here in 1830. Later that century a series of yellow fever epidemics drove the wealthy to properties on higher ground to the north. The family home was abandoned and declined in an unoccupied period before being converted to tenements in around 1910. Now the building was home to 23 families. It had two toilets and one kitchen. Abandoned again around 1950, it was bought by an Argentinian company in 1985. They weren't allowed to inspect before buying! Entry by the new owners was effected via the roof. In my experience of such projects, disaster, delays, and collapse of the purchasing company would be a probability in this scenario. But apparently the purchaser scrapped its plans to convert the tenement into a tango hall or other business and spent the next 17 years restoring both the property and its predecessor tunnels. The resulting museum and function venue is magnificent. Today there were tours in any number of languages taking place every few minutes. The staff must be exhausted.

It's hot again, so by the end of the El Zanjon tour we were ready to return to the hostel and prepare for the next phase of the trip.

The next posting will be from cooler climes.

Forgot to mention portion size :-) Mate tea is offered everywhere - even by some friendly police we stopped to ask for directions. Have fun in the south...

All sounds like your having a good time. Food looks great. Hope your Spanish is Doing ok.

Never mind Nick, your comments are a welcome bonus anyway.

Sue's Spanish is perfect as far as I can tell. Everything seems to be going smoothly at present. What's more, the Polish assistant at the hostel in El Calafate just happens to speak perfect English.