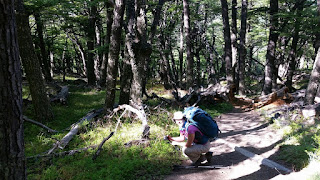 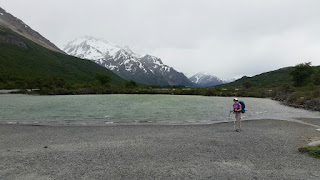 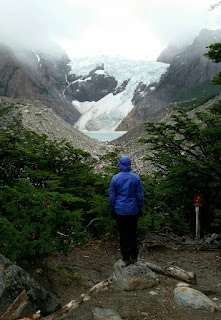 My Karrimat proved superior to Sue's Neoair, which kept deflating. Probably because the glue in the repair kit was missing and my attempt to seal the leak with tape was a heroic failure. This is the Neoair I used in the Pyrenees. It made me dizzy every time I blew it up. Now it's Sue who has the dizzy turns. I'm not sure whether they are from the Neoair or the whiff of antiseptic coming from the toilet.

It was bright and fine when we set off for the Poincenot campground at around 9 am, leaving a small scorpion to ponder his missed chance of invading our space.

We soon came across our neighbours, breakfasting beside the river away from the campsìte's dust storm. Their tent isn't as dust resistant as our Nallo. Denise and Owen are an Irish couple who set off on a world tour in July. Denise thinks she might even prefer rain to last night's dust.

We trudged back along yesterday's path before taking a left turn. Dwarf beeches lined the dandelion meadows.  In the woodland Sue spotted white orchids, lilies, pasque flowers and lesser celandine. Small birds sang sweetly. One of them looked just like the picture of a Dartford warbler in my bird book.

The 'idyllic lunch spot' mentioned in our guide book was passed. Its fine view across Laguna Madre was blurred by white horses and rainy squalls, and the 'lunch spot' was an area peppered with rain blown dust vortexes.

We arrived at the campsite dressed in dust blasted waterproofs. Denise has her wish, but I think she wanted rain instead of dust, not both at the same time. It had taken us a leisurely four hours for the 12 km walk. A judicious brew stop around half way proved to be a good move. After that the wind increased and the rain started.

Lunch was taken in the tent, to sounds of chatting Italians and what seemed like an industrial watering device hosing down the tent.

A buzzard sized bird of prey strolled nonchalantly around, inspecting the day's tourists.

Denise and Owen visited us. They looked soggy. They had been to collect water. They related stories from folk who regretted having attempted a walk up to two lakes that we were planning on visiting.

We decided to delay further perambulatory activities until after dinner.

6 pm. Still raining. But the two and a half hour return trip walk to a viewpoint above Laguna Piedras Blancas was chosen as a flattish alternative to our original plan (we were planning on going there tomorrow anyway).

Denise and Owen declined to join us. Their supply of clothes was becoming increasingly wet.

It turned out to be a very pleasant 5 km stroll through beech woods to an excellent viewpoint*. Cerro Fitzroy towered, unseen, above us, but the view through the moraine to the lake and the glacier beyond was excellent.

There was more wind and rain later, but that of no concern to us, cosy in the Nallo tent.

* Later I was told that the target of our walk was the lake itself, not the viewpoint.  Apparently we stopped too early.

Today's pictures:
Botanist at work
Laguna Hija, passed before reaching Laguna Madre in the rain
Looking towards Laguna Piedras Blancas and the glacier beyond

It all looks very worthwhile. Is this a circular trek or do you return the same way?

This is mighty scenery.
These dwarf beech - what do they look like? I can't imagine them for some reason.

It's a circular walk with doglegs Conrad. About 45 km in total over the three days.

Alan - I'll try to insert a dwarf beech (southern beech) image, or Sue will post one on Facebook.