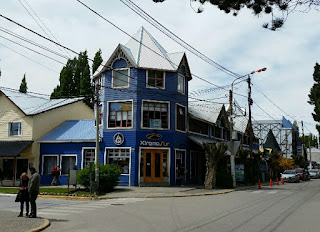 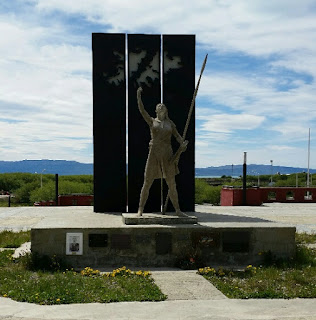 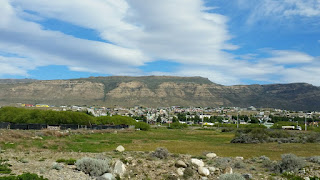 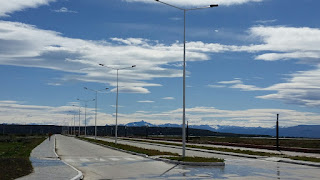 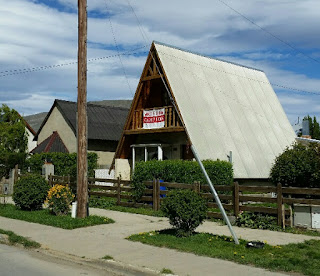 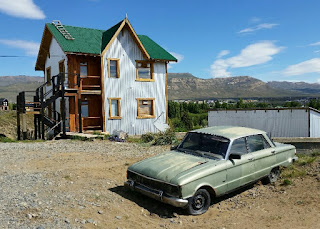 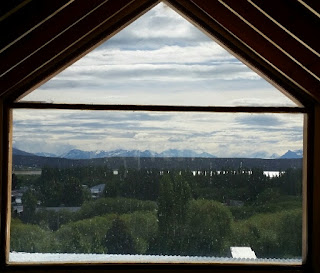 We were sad to leave Buenos Aires. It turned out to be an excellent 'City Break' venue. Everyone was friendly and helpful, things worked, and the weather was excellent, especially after hot weather training in the Pyrenees.

The hostel had happily printed our boarding cards and arranged a 6.30 am taxi to the airport, where breakfast for the two of us cost the equivalent of about £3.50. Prices here are generally just over half the cost of things at home. I think we may have misjudged that when we changed our dollars the other day, though costs may be higher further south. I'm sure we'll find a good home for any left overs.

Which of your employers sent you to BA, Nick? Our guess is Skins, though it could be just that you've holidayed here!

Good deed of the day involved the sad tale of Dorothy and Peter's cameras. Dorothy's is in Brazil (don't ask), and Peter's battery charger has gone awol. Sue came to the rescue by producing a compatible battery charger and adapter, which sadly didn't fit the sockets in the American built aircraft. Luckily one of the cabin crew produced the missing part of the jigsaw and Peter's dead battery was slightly rejuvenated after a spell in the aircraft's toilet. A plan was hatched whereby they can borrow the charger again in a few days' time.

I found it curious that even on the internal Argentinian flight all the announcements were bilingual, Spanish and English.

P and D had not enjoyed their time in BA, finding (or not finding) a paucity of iconic buildings and culture.

After a good couple of hours floating over buff coloured countryside, distant snow capped peaks came into view, remaining tantalisingly on the horizon for the rest of the journey to El Calafate, though we passed over many scars of snow that had me shivering in the cabin.

Peter and Dorothy now headed for the small resort of El Chaltén, whilst we jumped on a full bus that dropped us at El Calafate's America Del Sur Hostel - sister to the one we left this morning in BA.

A walk around town followed, with a pause for lunch at Viva la Pepa. The first six of today's pictures were taken during this short stroll.

The mountain views are distant. As good as any is the one through the hostel's dirty upstairs balcony window (pictured, bottom). Many of the houses in this place, which some may describe as godforsaken, are brightly coloured. Others are unfinished or derelict. A fair proportion have very steep sided roofs, presumably to shed the winter snows. Others resemble posh country houses that in my ignorance I may describe as haciendas. Corrugated iron seems to be a principal building material. Many of the vehicles are very battered and ancient Renault 12s seem to flourish.

Heading down past a memorial to the fallen in the Malvinas conflict, young men fighting for their country, towards the massive Lago Argentino, we encountered a nature reserve. My inadvertently handy bird identification (Europe) book wasn't much help. There was a very noisy duck that looked like a cross between eider and lapwing, with the voice of an oyster catcher. A brand of ibis was also out in force. One of many stray dogs pretended to own us. Tethered horses strained at their leads. Rubbish skittered in the breeze. It was unexpectedly warm.

After about 6 km we found ourselves back at the hostel. Our room was now available and we were soon enjoying mugs of tea in the upstairs lounge, grateful for a chance to chill out after our early start.

It was a holiday - today's photos very reminiscent of other places we stopped. But Argentina is a big place, lots more to see, and I suspect the rest of your trip may be inspiration for our next visit :-)

No tumbleweed pictures?
:-)
Enjoy the warmth. It will get colder when you head for the hills and glaciers.

I'll try for some tumbleweed Alan, but it may be a bit quick for this lens! We are advised to enjoy the Argentinian warmth before heading across the border, not least because the Argentinian hostel's are heated...

Ah, so you are using this as a sort of recce, Nick. Sue has done all the planning and will be happy to answer any questions once we have returned.