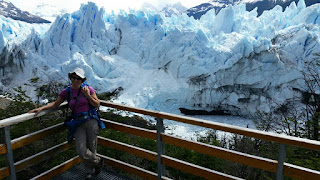 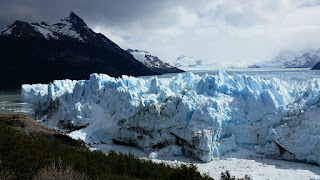 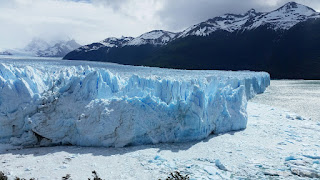 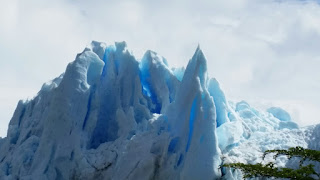 After a pleasant evening and meal at La Lechuza with a talkative Italian couple, we could afford a slow start on a sunny morning.
Everything works late here. We were still waiting for our 8.30 bus long after the local workmen had arrived to continue their efforts to extend the hostel. The bus tour we have booked goes by a special route to show the best of the area's flora and fauna. The trip we would maybe have preferred was not deemed suitable for old codgers aged over 65. Our room (Vyuni) is actually in Bolivia, from where our promised 'mountain view' is sullied slightly by the gleaming corrugated iron roof of the extension that is being constructed. Wires, some enclosed in thick rubber tubing, snake their way around the site. Workmen perch on high boards, maté cup in one hand, hammer in the other. The sun glares down from a vast blue sky, fringed with grey where cloud meets mountain. Our bus to the Perito Moreno Glacier never arrives. There has been a cock-up with the booking. All the 'tours' are either fully booked or have left already. We are given a bottle of wine and a taxi fare to the bus station, where the 'regular' bus will take us to the glacier at 1 pm. On a six week trip I suppose we can expect a few hitches. Time for another coffee then; we'll save the wine until later. We will now be back late tonight, so with an early start tomorrow we decide to sort out our gear for a three day backpack. Not that easy as we need some of it today and we also need to sort out a separate day sack with the  battery charger for Peter and some spare clothes for the end of the excursion. There's not an awful lot to do in El Calafate, which is pretty much a gateway town for a plethora of heavily booked trips - many to the glacier, and to the Fitzroy roadhead at El Chaltén, but also kayaking, mountain biking, etc. So I spent a while in the hostel chilling with Bruce Chatwin's book. Sue enjoyed a snooze. Viva la Pepa provided lunch, then we took the 1pm coach to the glacier. Much to our surprise, it ran on time. Perito Moreno Glacier is an amazing place. Newly constructed walkways help to disperse the hordes of visitors. We spent over three hours on the 5 km of balcony paths that overlook the glacier, the 55 metre high corrugated facade of which was continually dropping lumps into Lago Argentino, these lumps plummeting into the abyss like penny coins in an old fashioned slot machine.
Strange birds observed our passage, part of which was through an unlikely positioned forest and the bright red foliage of Chilean fire bushes. Lots of pictures were taken. I've chosen several at random, the thin lower image being a panorama that will display better if you click on it. (Click on any image in this series of postings and you should get a short slideshow indicated by the thumbnails at the bottom of the screen.) After four and a half hours at the glacier the regular coach returned for us a good hour after the café had shut and most visitors had left. Luckily we had some butties with us for tea. A bird of prey akin to a large sparrowhawk blatantly stalked any poor creature that decided to feast on our crumbs. Here's a bit about the glacier, courtesy of Wikipedia: The Perito Moreno Glacier is located in the Los Glaciares National Park in southwest Santa Cruz Province, Argentina. It is one of the most important tourist attractions in the Argentinian Patagonia. The 250 km2 (97 sq miles) ice formation, and 30 km (19 miles) in length, is one of 48 glaciers fed by the Southern Patagonian Ice Field located in the Andes system shared with Chile. This ice field is the world's third largest reserve of fresh water. Located 78 kilometres from El Calafate, the glacier was named after the explorer Francisco Moreno, a pioneer who studied the region in the 19th century and played a major role in defending the territory of Argentina in a conflict involving a border dispute with Chile. The Perito Moreno Glacier is one of only three Patagonian glaciers that is growing. The reason remains debated by glaciologists. The terminus of the Perito Moreno Glacier is 5 kilometres wide, with an average height of 74 metres above the surface of the water of Argentino Lake. It has a total ice depth of 170 metres. Pressure from the weight of the ice slowly pushes the glacier over the southern arm of Argentino Lake, damming the section and separating it from the rest of the lake. With no outlet, the water level on the southern arm of the lake can rise by as much as 30 meters above the level of the main body of Argentino Lake. Periodically, the pressure produced by the height of the dammed water breaks through the ice barrier causing a spectacular rupture, sending a massive outpouring of water from the southern section to the main body of Lake Argentina. This dam–ice-bridge–rupture cycle recurs naturally between once a year to less than once a decade. Such an event is now due. But it didn't happen today.
Back at base, we have settled up, downed our wine, and have watched day turn to night.
Tomorrow a three and a half hour bus ride should take us to the Fitzroy area and a three day backpack. Phone reception or wifi is unlikely, so the next posting will be in a few days' time.
Posted by Phreerunner at 00:58

There should be no problem getting wifi in the wilds of Patagonia. Its in the Lake District UK that wifi is vey non plus even if it is now a human right to have broadband.

Oh wow wow wow, what fantastic photos. The peaks really are like huge meringues aren't they. Reading this is just the tonic I need as I'm still suffering from the malaise that struck me down in Leyburn. Look forward to the next episode.

Fabulous, Sir.
:-)
My niece, Mary, did this trip on a year off last November. It's interesting to see two different takes on the place.
Great pictures, and strong words too.
:-)