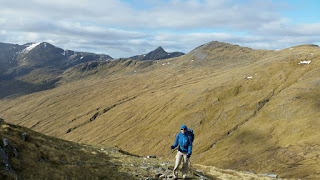 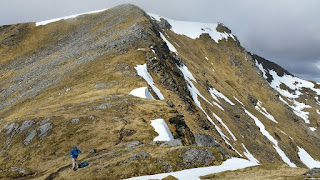 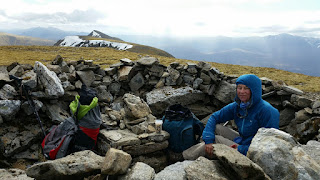 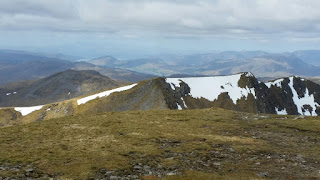 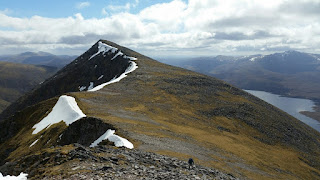 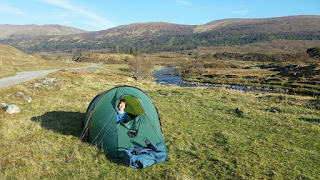 Setting off following footprints in the mud, we noticed them becoming increasingly erratic. Splatters of blood became mixed with the mud, and vultures could be seen just ahead. They were flying high then letting go of something. Closer to the scene, bits of flesh and bone littered the path. Soon we came upon a scene of carnage. In the midst of this, my companion spotted some soiled underwear. "It's got a label" he whispered. "Go on, Humphrey, I replied "I'm scared, can you read it?" Humphrey took the label, read it, and put on his 'serious face'. "Well?" "Bad news" announced Humphrey. "A Slowman - Form 4d."

I woke with a start. It was 4 am. 50 metres away, Richard's micro tent sounded as if it was about to explode.

By the time I had recovered from the nightmare chronicling 'A Sloman's' demise, it was time to wake Richard if he was to join us on an 8 am start. I peered out of the tent at 7 am to see him all packed and ready to go. He has walked an identical route to ours today and is camping nearby, but far enough away that his snoring won't trouble us. He's possibly a bit tired after being on his feet for twelve hours.

We left an hour later, at 8 am as planned, and pottered up Sgurr Choinnich without incident. The top was in cloud and we were in full waterproofs as it looked about to rain. All we got were a few flakes of snow, but the cold wind and freezing temperature justified the garb.

Sgurr a' Chaorachain sports a fine windbreak, of which we took advantage. By now the weather had cleared and the views were superb. Richard had just left this second summit, but he waited for us at the third and final summit of the day, Bidean an Eoin Deirg, which appeared to us to be the highest point we reached, but is I now discover merely a Munro 'Top', and not a Munro summit. Appearances can be deceptive.

We enjoyed a brew for elevenses whilst a golden eagle drifted on the wind below us, before swooping up to inspect the visitors then gliding off towards Lurg Mor.
Richard joined us for the long descent to an excellent lunch spot by the river below Creag na Gaoithe, then we headed on along the undulating path beside Loch Monar, joining the path just in front of a heavily laden red man who we never saw again. We disturbed a snipe and observed wood anemones as well as passing bright yellow gorse, pale blue butterwort, and well camouflaged sundew plants on our way to Monar Lodge and then on to our camping spot.

There is plenty of room on the roadside grass, but Allt Toll a' Mhuic is completely dry, so we've had to filter water from the river. Cuckoos, also heard earlier today, are very active here.