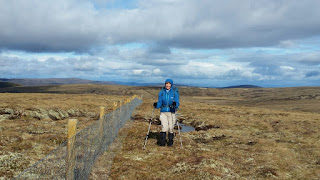 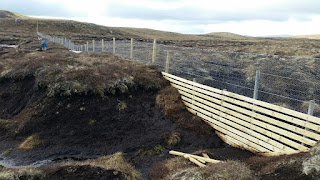 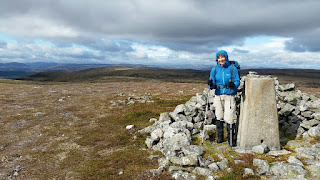 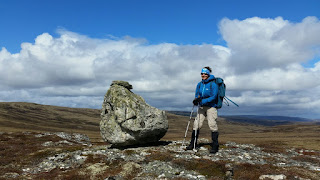 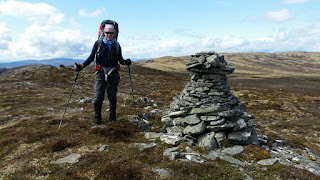 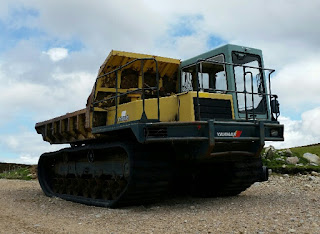 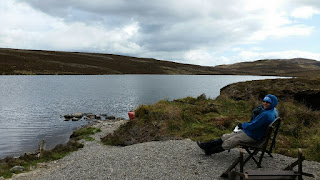 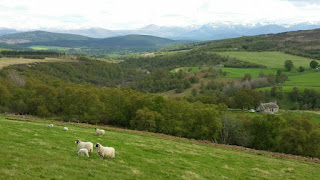 Route: as planned plus the last 3 km of yesterday's plan, and a minor variation

The campsite was flat and soft. We slept well. As we rose, a large bird of prey circled lazily nearby.

A short section of track led to a tiring nine kilometres of bog hopping and grike and grough climbing. After about an hour and a quarter we passed Loch Braigh Bhruthaich, where we had originally planned to camp last night. Camping looks possible, but our chosen spot probably had the edge.

A new fence graces this area. We noticed several puzzled hares (we've seen lots of them) bounding up to this unexpected barrier and stopping dead with fazed looks. Hopefully they will reclaim their territories by either digging or leaping.

The sun came and went, interspersed with a few spots of rain, as we left the fence at Carn Glas-choire and progressed happily to the summits of Carn Mheadhoin and Carn Allt Laoigh, unhindered by anything other than bogs and grikes.

Slithery lichen and patches of cloudberry seemed to cover everything that the heather had missed.

Good views were maintained all along the broad ridge, with the snow clad Cairngorms diving in and out of cloud and showers. Richard should be in Aviemore having a day off with Rosie. We hope he's enjoying that. To our north east was a breast shaped mountain that I first identified as Mount Keen. But I think it was Ben Rinnes; Mount Keen has a more pert nipple.

A spot for a windy brew was found shortly before reaching a quiet road, along which virtually every car that passed us gave a cheery wave. The brew stop revealed a small plant with bright green leaves and small white flowers tinged with pink, and another with prickly leaves and yellow flowers, neither of which we could identify. Where's that copy of 'Hostile Habitats'?

We knew that we had to turn right off the road, but we mistakenly turned too early, down the dead end road to Glentarroch, a small unoccupied building. But it turned out not to be a dead end. The track now extends to join another one by Lochan Dubh. This means we accidentally avoided about 4 km of metalled road. A happy accident, which we celebrated with a windy lunch on a pebbly beach near the southern end of Lochindorb. The only blot on the landscape was a large tracked vehicle, seemingly abandoned after the track had been completed. The wealth of landowners in Scotland appears to have no limits. We half expected to find a cruise liner parked on the shores of Lochindorb!

Mink traps abound here, sat on poles across watercourses. (Useful for river crossings!) The rodents obviously don't like wet feet. There was also lots of ground nesting bird life around here. Geese and grouse with young chicks, lapwings and plovers, and several others that we couldn't identify. Where's that book?

Sue took a break on a chair by Loch an t-Sidhein, whilst I saw to other needs on which Nightbird will no doubt see fit to comment!

We were expecting paths for the next six kilometres. They are after all marked on the map. But all we could find was the occasional rabbit run and, as almost everywhere, a trail of spent cartridges littering the hillside. This meant more wear and tear on the feet and knees. Shame!

Eventually we arrived at a fenced off area, apparently to facilitate a new deciduous forest, from where it was an easy, scenic stroll into Grantown-On-Spey and the fleshpots of Kinross House and pie and chips and real ale at the nearby Craig Bar.

The views had gone from brown to a lush green during our final descent past a barn stranded fifty year old Jaguar.

We saw no other walkers today, until reaching the outskirts of town, let alone any Challengers. We've only seen one Challenger, Anthony Driscoll, in the last five days' walking. We phoned in and spoke to Ali O (who by coincidence was staying at this guest house last time I visited it) but forgot to ask any questions about other Challengers, such as "is anyone else in Grantown-On-Spey? How many have dropped out? Has Mick finished? How many hedgerows have JJ and Denis slept in?" Etc etc.

Twenty six withdrawals as of 10pm on Saturday night, which is the exact same number as the end of middle-Saturday last year.

Thanks Gayle. We are just off to Ballater from Tomintoul, so should meet more Challengers soon, but there may be 'radio silence' for a while.
M

Ha ha, I'm saying nothing! Don't want to get a reputation for toilet humour.

Ben Rinnes is more easterly than north easterly from around there, there are one or two other pimples that are quite prominant in the area as they aren't surrounded by other hills, Ben Rinnes is very distinctive.

I don't think I took a photo Louise, but I think it was Ben Rinnes - my bearing estimate was perhaps a little off target!