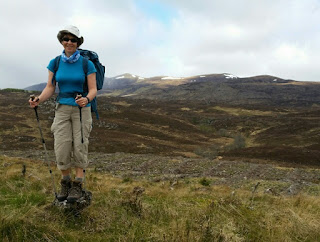 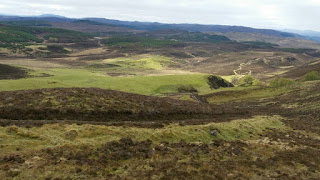 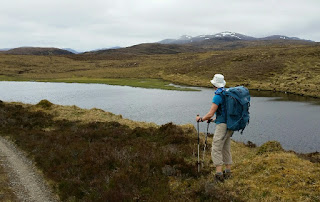 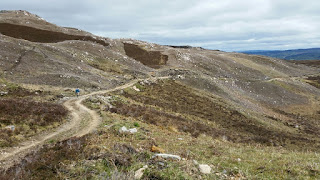 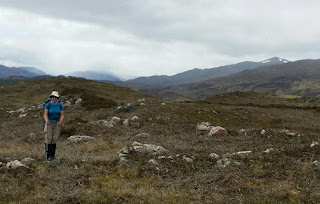 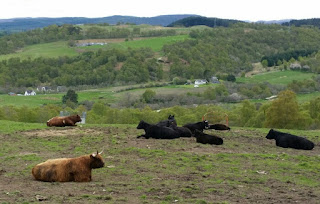 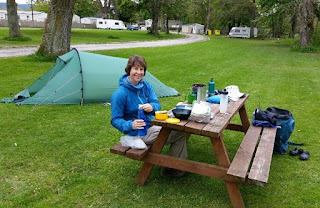 Cnoc Hotel served an excellent meal last night, and a fine breakfast this morning. Sue and I said our goodbyes to Alastair and Richard and made a leisurely departure at 9.30 on a 'just about fine' morning. However, the skies opened above us from time to time and we spent most of the day in t-shirts and sun tan cream.

The views as we headed gently up past mewing buzzards and Lochan Fada to Loch Ballach were wide ranging if not spectacular. A swan was paddling serenely on Lochan Fada. The good track was interspersed with large puddles housing a collection of water boatmen, tadpoles and water beetles. Not much good for the hovering kestrel. Large scats seemed to contain lots of hair but no bones. We wondered what had produced them.

After a brew up near Loch Ballach, with huge views to the snow clad Cairngorms and back up Strath Farrar, we headed cross country past scattering deer to pick up the track through fire scarred heather to Farley. On the way we passed through an area of hut circles that looked as if they could be ancient.

After lunching just before Farley we caught up with an elderly lady and her dog, the first person we'd seen since leaving Struy nearly five hours earlier. After chatting for a while we left the lady and took the shortest route we could see on the map between NH 474 453 and NH 484 456. There was a good 100 metres descent and ascent. After passing some rather swish residencies we arrived at the second of the above grid references, to find the elderly lady coming from the direction of a 'no through road'. She was surprised to see us.

"I didn't realise you were coming this way" she said, "there's a right of way through the fields that isn't marked on the map. You are lucky I stopped for a chat with someone or I'd have missed you. You will come in for a cup of tea?"

The following hour was spent in the company of Maureen McCallum and her dog Tessie. She's a lovely lady and over tea and Battenberg cake told us how her husband had hated working in the tunnels of Strath Farrar's hydro system that we had passed yesterday. There were also stories of the new owners of the Lovat Estate (apparently young Lovat was a gambler who died young and presided over the demise of that clan) and their naivety in highland ways. Maureen also told us that whilst the hut circles we'd passed may be ancient, the buildings were occupied until the early 1800s, when the failure of local people to return from wars in Russia left the area bereft of people. She also pointed out the remains of an old mill that had been operational in her own lifetime.

After that it was an easy stroll down a new footpath lined with the rich coconut aroma of gorse in flower, to a cheery welcome at the quiet Lovat Bridge campsite that looks none the worse for recent flood damage. You'd have thought that the control of water through the hydro system should prevent flooding?

Graham Weaver and David Wishart were booked to be here, but sadly Graham suffered a bereavement that put paid to their Challenge before it had started. They would have been good company.

So, no other Challengers have been seen since this morning, and we are having a quiet evening at camp listening to the birdsong and reading our books. I'm enjoying '50 shades of Hill Walking' (Ralph Storer) rather more than Sue is coping with her book club's current offering, 'George Passant' (CP Snow).

* A note re distances:
I've stuck to my estimates according to Anquet mapping software. This is for consistency. The distances may be consistently understated by around 15% according to Richard Fuell's sophisticated GPS gadget, which takes account of lots of small twists and turns that can't be emulated using Anquet.

Really enjoying this TGO Challenge blog series. Look like you're having fun!

Thanks Tim, it's good to hear from you. You might enjoy this one day. (Plenty of time for you, the average age is about 57.)

How's the new rucsac shaping up so far?

The new rucksack is excellent, Nick. It's great to have lots of space - makes packing much easier. It looks huge but it definitely won't be named after the last one - 'The Brick'!

Staying with you. Weather looks amazing.