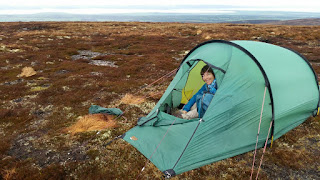 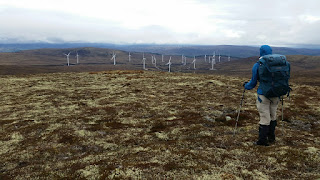 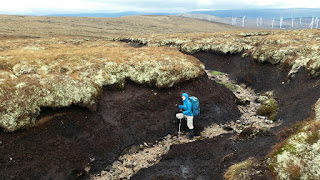 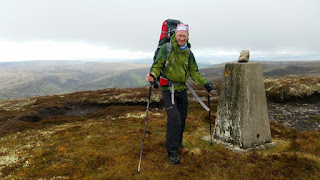 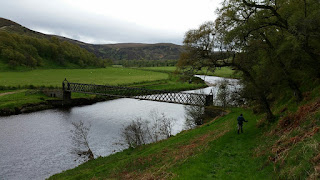 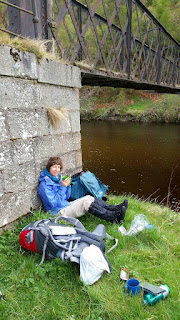 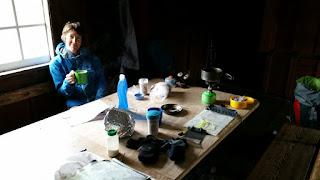 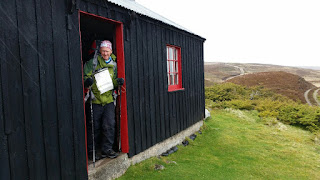 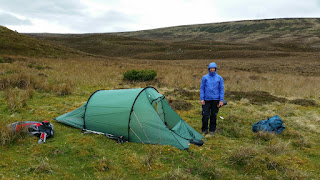 Route: more or less as planned until we failed to pass an ideal camping spot 3 km short of our target

Weather: cloudy morning with the local tops clear; light rain for an hour after lunch, then brief showers; cool

Once the tent was up last night it took a bit of a buffeting in the squally rain that soon arrived. At one point a disembodied voice issued a greeting, but there was nobody to be seen. Perhaps the ghost of a lost redcoat.  At 8.30 we heard the sound of zips being zipped. Peering out of the tent we saw a young lad by the trig point who seemed quite surprised to have found a tent full of people sipping steaming hot chocolate. Sopping wet, he took flight.

The rain stopped and so did the wind, leaving us in perfect silence apart from the calls of plovers and wheatears.

Peeping out in the morning, we could see Inverness, but it was hardly sparkling with lights.

We enjoyed a leisurely breakfast before packing up and leaving our summit camp by 8.30. The morning was spent laboriously proceeding in a roughly easterly direction over and through an exemplary collection of peat hags and grikes. We saw nobody. Wind turbines were the only blot on a wild view.

After a while we reached the 615 metre summit of Carn nan Tri-tighearnan. It had been leering at us beyond the grikes for some time. The white flowers of cloudberry kept us company. They looked refreshed having spent yesterday in the cloud.

Eventually, after 8 km of rough stuff (we enjoy it really - the TGO wouldn't be a Challenge without it) a Land Rover track (LRT) appeared and we spent the rest of the day on such tracks.

Lunch was taken in the lee of the south easterly breeze provided by a footbridge beyond the smart but deserted Daless Farm. A couple of fishermen were busy trying to extract life from the River Findhorn.

On the steep climb out of the Findhorn valley we stopped to chat with one of three motorised gamekeepers seen today. A pleasant lad, happy for us to be on his patch so long as we leave nothing behind, which of course we don't.

After a while we reached the lunch hut where I camped outside and Ali O spent the night inside on a previous Challenge - 2013 perhaps. Too early to stop. The straight uphill track beyond this reminded us both of the Burma Road route (not to be confused with the excellent trail number three in Gatineau Park) into Aviemore. Except that there are none of Aviemore's fleshpots beyond this 'road', just the excitement of reaching the Black Bothy. Despite the door being open, and an old rucksack being present in an area open to the elements, there was nobody around. A note on the wall told the story of a fatal plane crash in 1959, just 200 yards away. Perhaps the airman's ghost stalks the bothy.

We brewed up whilst a squall passed outside. Given the uncertainty as to the efficacy of our planned campsite, we considered stopping here, but it wasn't very clean and would certainly be colder than our tent.

So we continued onwards, splashing through a number of fords, towards Garn Gruamach and our objective beside a lochan just a little further on.

There was a good stream for water, and numerous perfect camping spots as we strolled on. We were less than an hour from our target and it was 4.30, and we were dry, but it might rain again. No problem with stopping then? So we took the 'bird in the hand' and settled down for a leisurely evening on a nice flat pitch next to a sparkling stream.