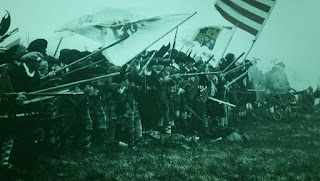 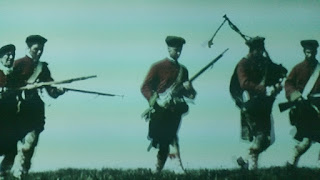 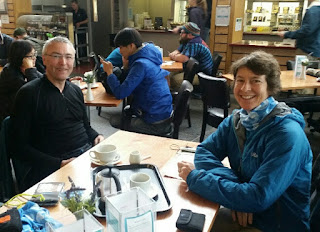 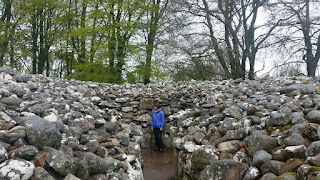 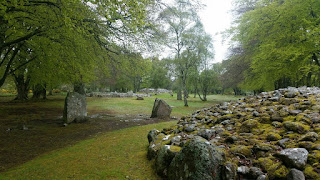 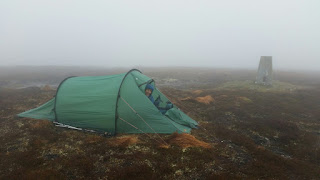 Kenny served an excellent breakfast in full Highland regalia (Kenny, not the breakfast!). Well done to him. We explained what the TGO Challenge involved and he returned to the topic of his 'Christmas Box' (our resupply box).

"There was no whisky" he complained ..."shame on you". Yes, shame on us, though it may have been lost to Kenny if it had been there.

We trudged down to Blacks in the rain, and, armed with enough gas for more dazzling adventures in the tent, ambled uneventfully to Culloden. My previous route over this ground went through Culloden village and Culloden Wood. Today's footsteps were mostly on tarmac and rather inferior to their predecessors until we reached the 1746 battlefield, which was interesting to walk through albeit we were forced to hide in a trench for a while when the ghosts of the battling government forces and the Jacobites strayed into our monochromatic time zone.

It seems that Gayle was here last night. Perhaps her nefarious activities had awoken the ghostly past. They seemed very realistic.

There was nothing ghostly about Anthony Driscoll, who popped in to the visitor centre for a coffee before dashing off to Downey Forest and a route along the north coast to Fraserburgh.

It was raining outside. So we stayed put. For three hours. That's why it has taken us so long to complete such an easy day's walk.

By the time we left the visitor centre the rain had virtually stopped. We enjoyed a dry afternoon, though the rain returned soon after the tent was up.

A visit to the Clava Cairns, burial tombs from thousands of years BC, involved a short but worthwhile diversion, before we passed under one of the Nairn viaduct's impressive 29 arches.

At last the tarmac was in the past and we enjoyed a final five or six kilometre stroll up gentle slopes on a good track to the 548 metre summit of Beinn Bhuidhe Mhor. My vetter had encouraged us to camp here as there is "a wonderful view of the twinkling lights of Inverness". Not tonight! Such inaccuracies require naming and shaming, Graham Dunsire. ..

Anyway, it did provide a flat place to camp, albeit water is a bit scarce (I suppose we could just have used the run off from the tent, but luckily there's a small spring by the side of the track at around 500 metres).

The wind is not inconsiderable, but only a fraction of that at Easedale Tarn last Easter. It's cool tonight at 548 metres. Luckily we have cosy down bedding.

So close - but unfortunately I'm now too far south to bump into you with tea and cake.

3 hours in a visitor centre! I bet they thought you expected B and B. Ha. When i saw the picture of the Viaduct i thought "back in Yorkshire already".
Look forward to your next leg it looks interesting, hope the weather is not too bad for you.

I had a rather 'carry on' comment regarding your 'dazzling adventures in the tent' ..... but decided against!
Assume soldiers were from battle of Culloden,not some fierce TGO-ers.
Happy walking!

Haha - it even took me a while to find the text you're referring to, Jenny! In reality, we've had so many 'dazzling adventures' that cataloguing them would be a life's work....
Ha

Yes Jenny, that should be a best seller! I'll never have to work again. Hooray!!!?

Okay, I know where you were, I've been there, but where the heck is 'Downey Forest'? Darnaway Forest perhaps? Just curious...

Anthony had quite a long way to go. We heard him say 'Downey' but on looking at the map, he must have said 'Darnaway'. If he reads this (unlikely), perhaps he will clarify!