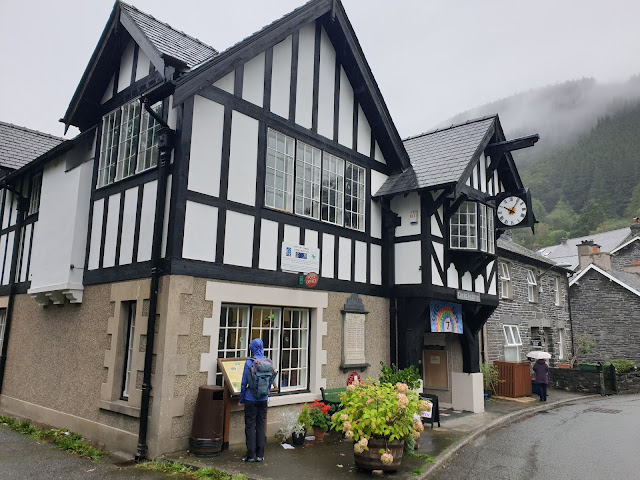 Cwm Ratgoed was today's objective, accessed via the village of Corris, where there's free parking outside the steam railway museum that was closed today.

Corris is endowed with a mixture of buildings. At the top of the tree, fine constructions like that shown above, graduating to tumbledown cottages at the end of the row shown below. 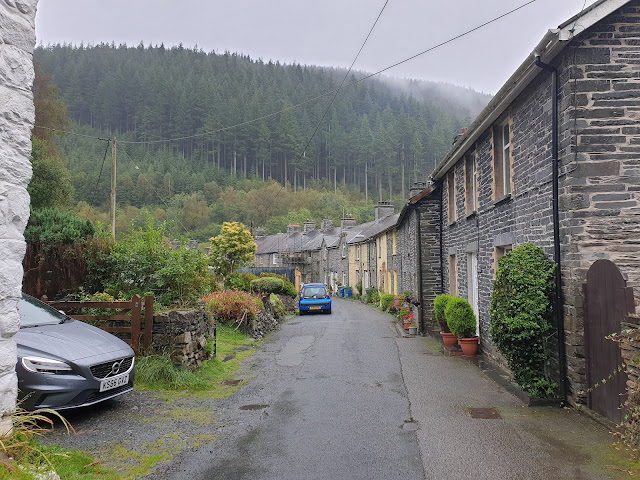 A footpath through the woods next to the meandering stream, Afon Dulas, was soon located. The weather was drizzly and we had driven through cloud on the way here, but it was warm, and the damp air was slowly dissipating. My old trail shoes didn't stand up to the wet grass as well as Sue's sparkly new ones.
This view from the path shows how the cloud was down; this would have been a viewless mountain day. 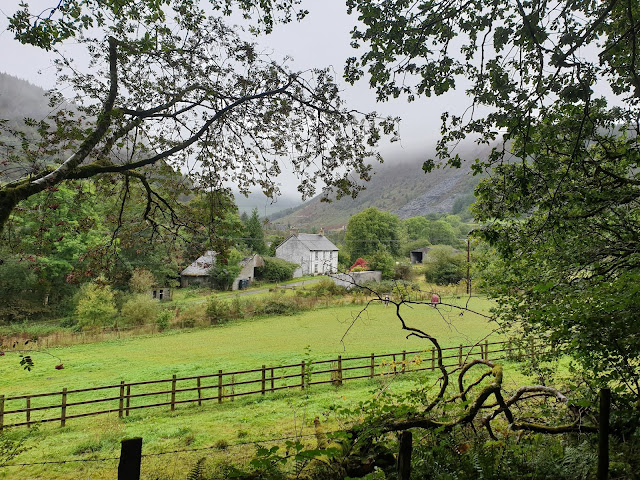 The river tumbled down over a series of rapids and small waterfalls. Sue spotted some good swimming pools, but today was not the day. 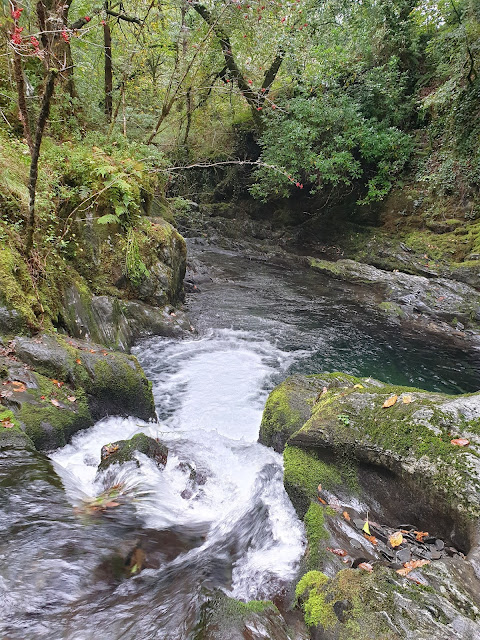 The area has been home to slate mining since the 14th century, and there are countless derelict reminders that the mining heyday of the 19th century is long past. 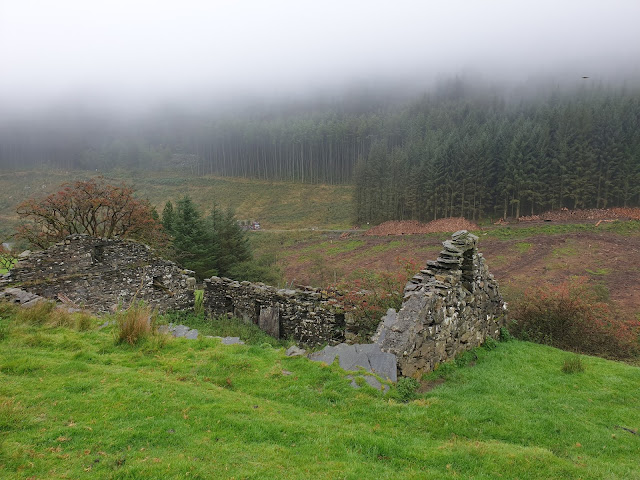 As we strolled through the wet grass we passed a tree that held hundreds of apples, each not much more than an inch in diameter. 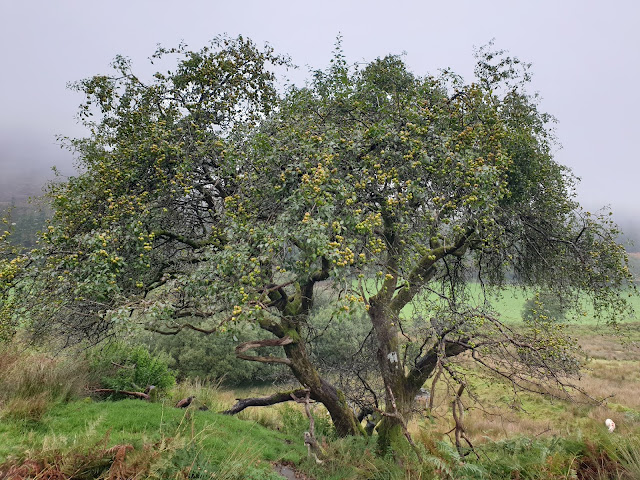 What looked at first to be just another carcass of a mine building turned out to be the remains of a chapel, with a stained glass window still vaguely intact. 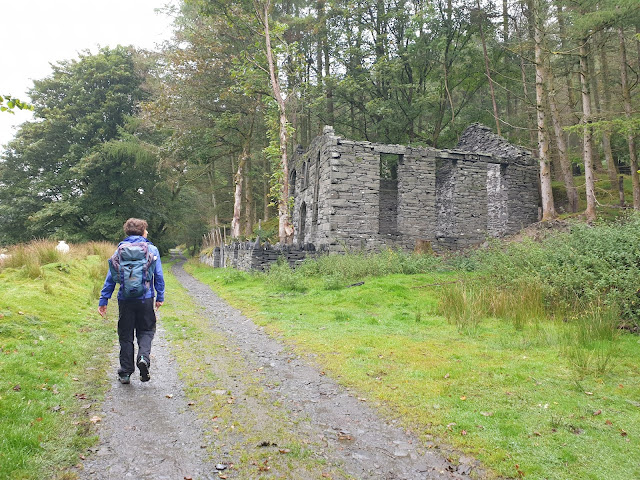 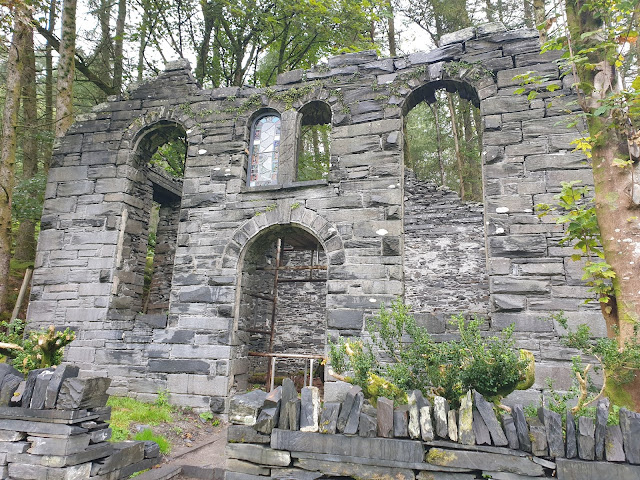 We passed extensive ruins at Ratgoed Hall, where a more modern building is also crumbling. 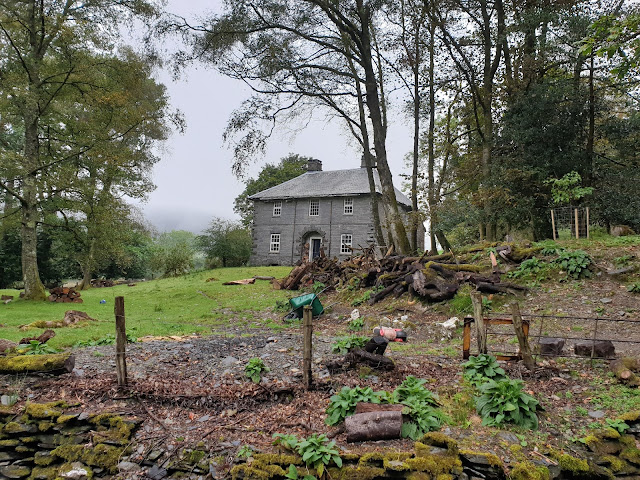 A little further on we reached our turning point in Cwm Ratgoed, where a conveniently placed picnic bench overlooked Dolgoed, which looked to be a fairly idyllic, if rather remote, working farmhouse. 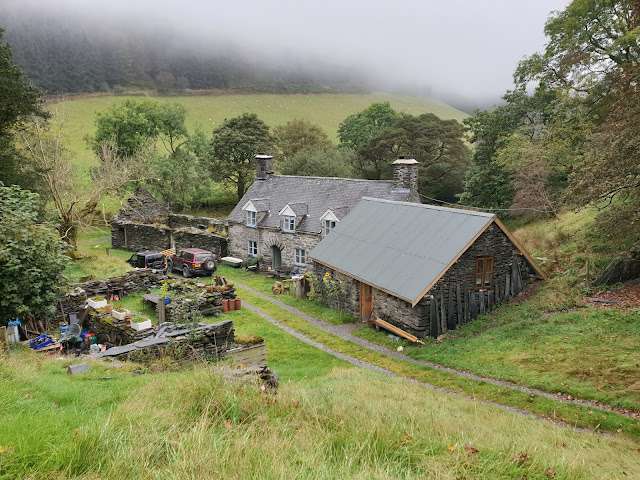 Today's lunch of crisps and chocolate was somewhat hampered by a manky apple that Sue had chosen to bring along, and by the excellent cheese and cucumber sandwiches that I had contrived to leave behind in Porthmadog! We observed tits in the trees enjoying their lunches - they seemed to be finding lots of insects. Buzzards toured the skies.
Our planned route back down the other side of the valley was clearly out of bounds due to very active forestry workings. We didn't need to continue to inspect the inevitable sign. So we retraced our route for a little way before rejoining the planned route on a narrow road where a massive load of timber rumbled past. On the way, we got a good view from a walled pathway. 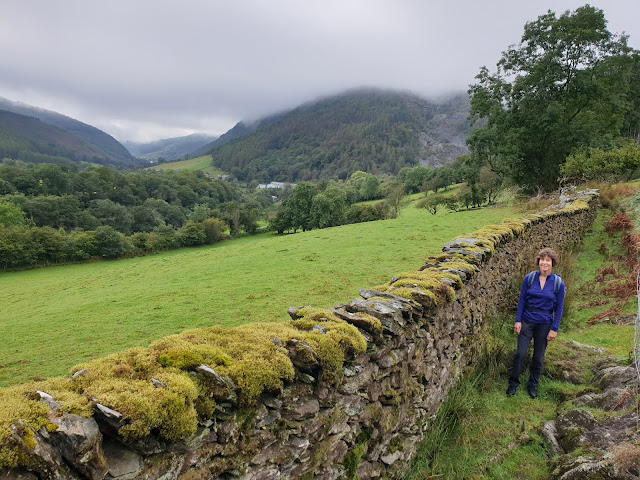 Before retracing our outwards route back to Corris, we entered woodland at Foel Friog, where we finished our tea at a picnic bench in the empty car park. We saw no other walkers today.
A signposted route in red, using forestry tracks not marked on our map, is available from here. 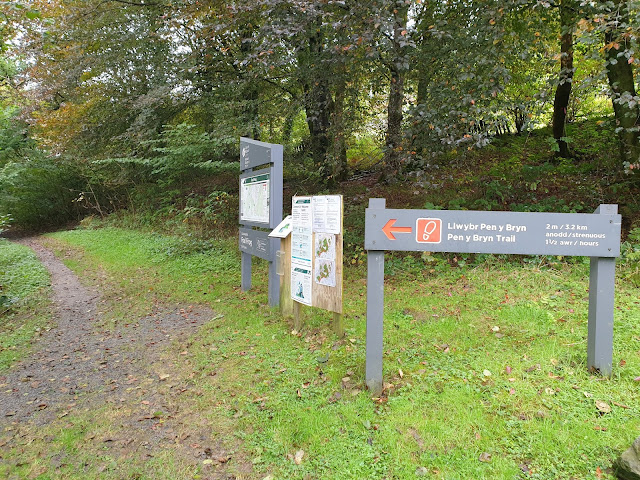 Our route is shown below in blue (click on the image for a better version), it was about 15km, with 200 metres ascent, taking a shade over 4 hours. 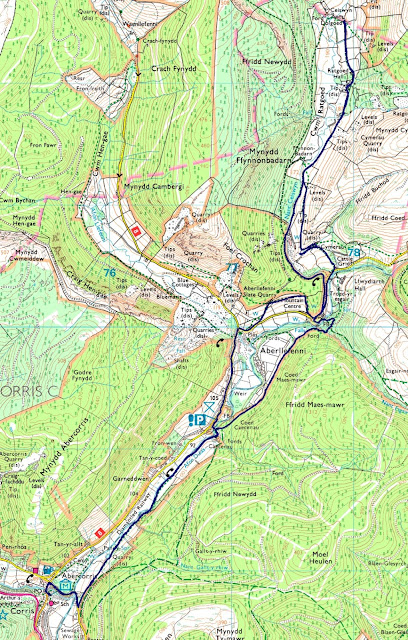 This concludes our walks in Snowdonia for this trip, during which we've been blessed with fine weather. I won't miss the cumbersome manner in which these postings, using (no WiFi available) just a mediocre phone signal, have to be composed, each picture taking several minutes to load.
We'll be back in November...
Posted by Phreerunner at 22:05

Just caught up with you - been away in Hereford visiting Mr and Mrs Big Brother for a few days. I've much enjoyed your Welsh walking.