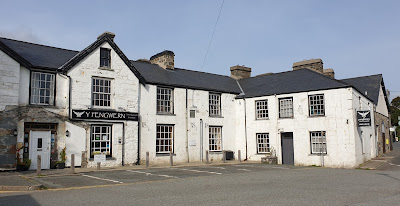 Today's walk was a combination of two of Alex's routes, one of which Sue and I walked in 2018, long before his books were published.
Free parking outside the Pengwern pub in Llan Ffestiniog, and a wander around the church yard, then we found our way down past tormentil with splashes of eyebright, to the woodland path above the Ceunant Cynfal gorge. 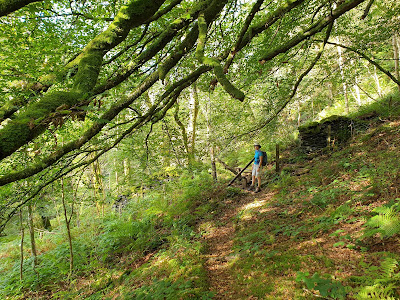 There are lots of mushrooms and fungi in the woods just now, not that we identified anything edible. 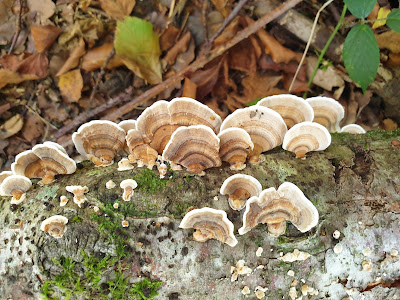 After crossing the river at Pont Tal-y-bont, our left turn to Nurse Gellidywyll, was adorned with a discouraging sign. 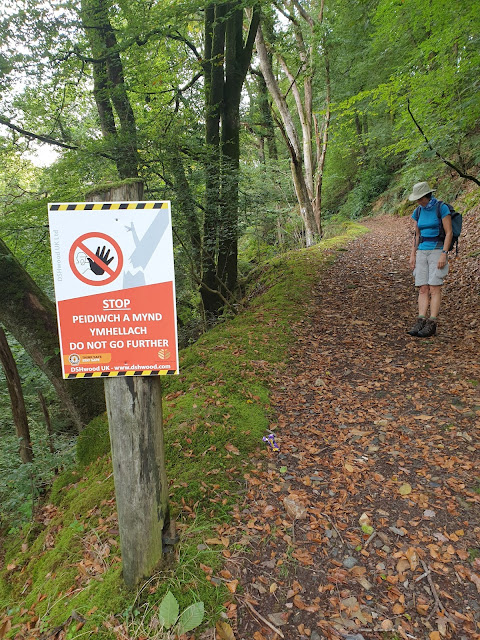 Our experience of such signs has led to our ignoring them unless there's the noise of machinery ahead. The signs are put up and not taken down. Clearly the path had been closed in order for the devastation of a section of woodland to take place. 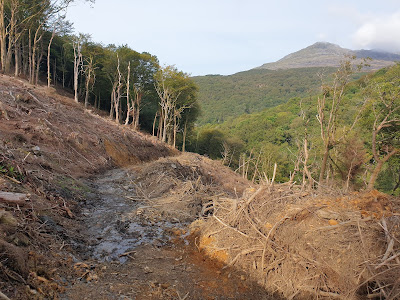 Tits of several varieties gorged on something in the trees, and the Moelwyns came into view. It seems that the dam at Llyn Stwlan is undergoing some sort of renovation. 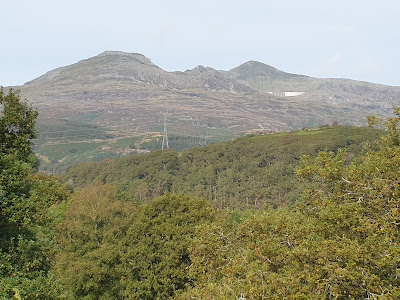 Beyond the rogue sign and the forest devastation, the pretty woodland walk above the Cynfal gorge continued, during which we saw another couple of walkers, the only ones seen today.
The Afon Cynfal makes its way through the pretty gorge, offering numerous photo opportunities. 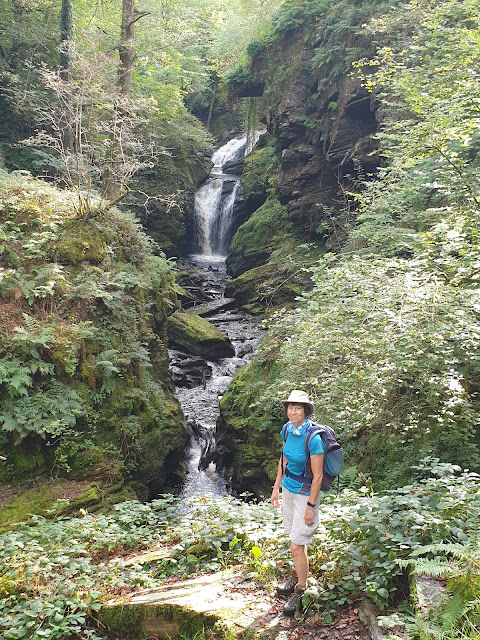 The Snowdonia Slate Trail seems to crop up everywhere. 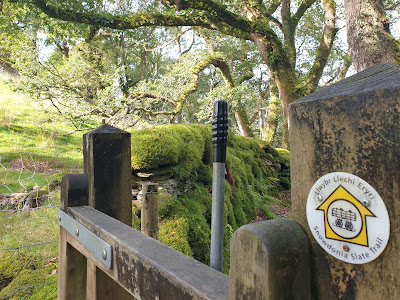 Encountering a railway viaduct in such places is always a surprise to me. Below, a dipper traversed the waterway. 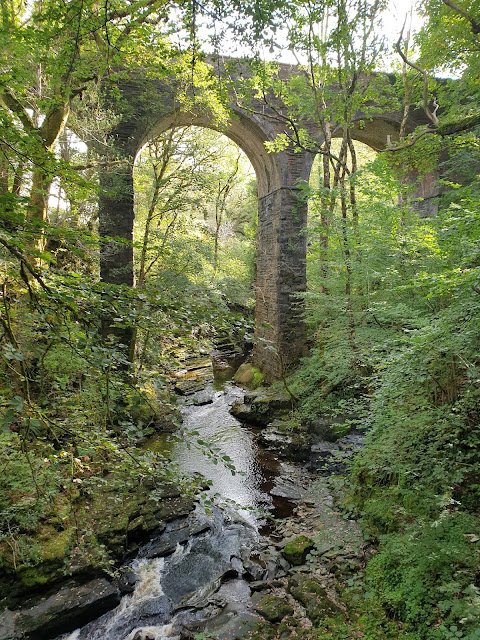 That was after we'd left Walk 1 and were heading towards the route of Walk 2. The gorge is littered with waterfalls and is bordered by forest, through which the sun was trying to penetrate. 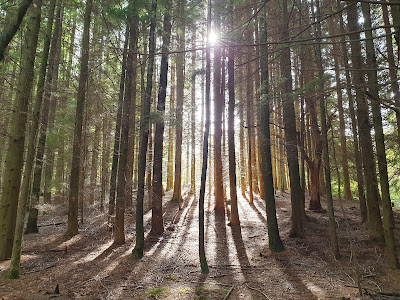 Before joining Walk 2 near Bryn Mawr, we found a good spot for elevenses, under the watchful eye of a couple of fighter planes that seemed to be practicing dogfights.
Then we moved pleasantly past some miniature horses at Cwm Farm, allegedly dating from 1492, before rising above Afon Cynfal to a fine viewpoint across to the Rhaeadr y Cwm waterfall.
We found a great spot for lunch, and noted that we'd arrived too early for a good photo of the waterfall, which was still in shade. Buzzards and crows competed for airspace. 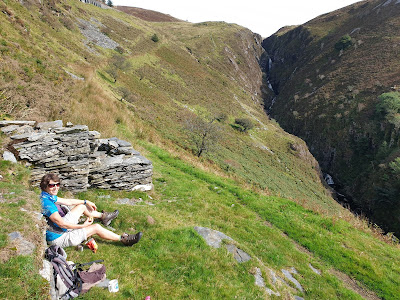 There were fine views down the gorge towards the coast. 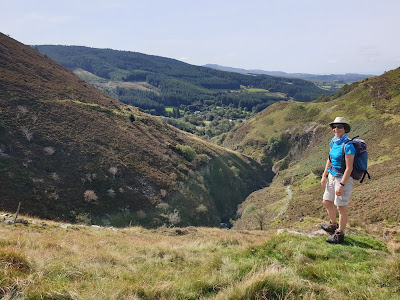 Near the top of the waterfalls the scenery changes to upland moorland. A narrow path led past discarded machinery to a high reservoir, Llyn Morwynion, where a couple of anglers - one intensely fishing, the other snoozing by the boathouse - were enjoying their preferred form of recreation. 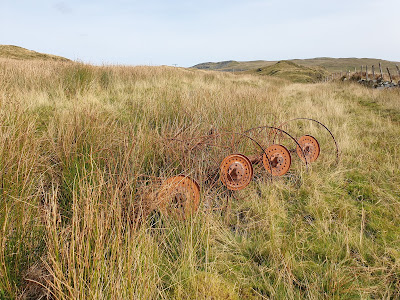 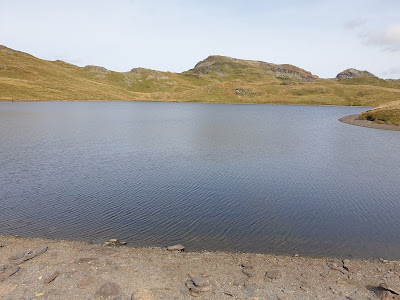 Our descent back to the Cynfal gorge was largely along grassy paths, though beyond an empty pair of discarded trousers a walled section before the farm at Bryn Mawr was neither welcoming (we had to climb over locked gates) nor dry (the path having taken on the characteristics of a river bed). 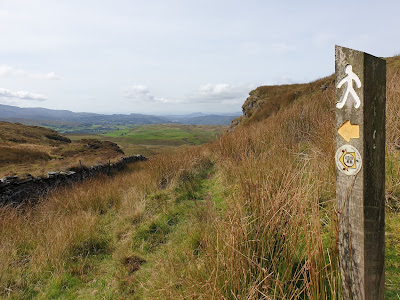 There are still quite a few plants in flower in addition to those already mentioned, as well as sweet tasting blackberries:
Red campion
Herb Robert
Gorse
Stitchwort
Harebells
Rosebay Willowherb
Red clover
We continued along paths bordered by fading bracken. 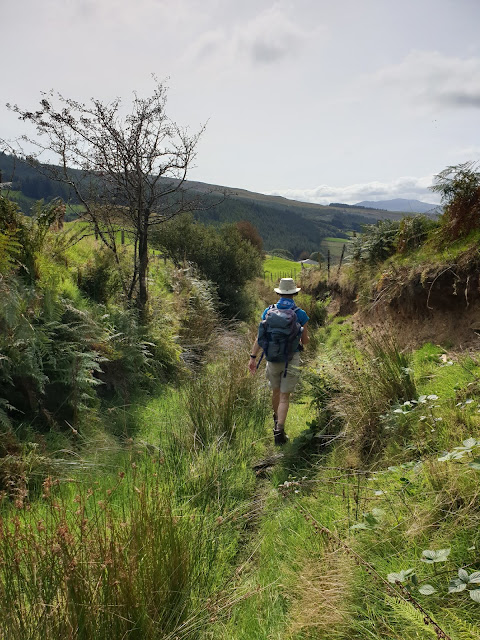 Beyond Bryn Mawr, a rather more friendly sight... Bill and Ben. 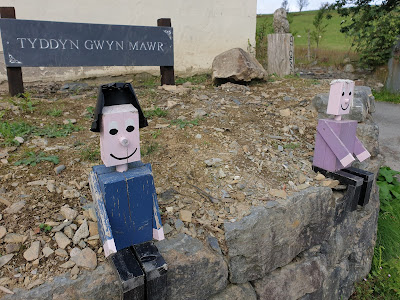 Then we were back in the gorge, soon pausing above some waterfalls to drain the last drops of tea from our flask. 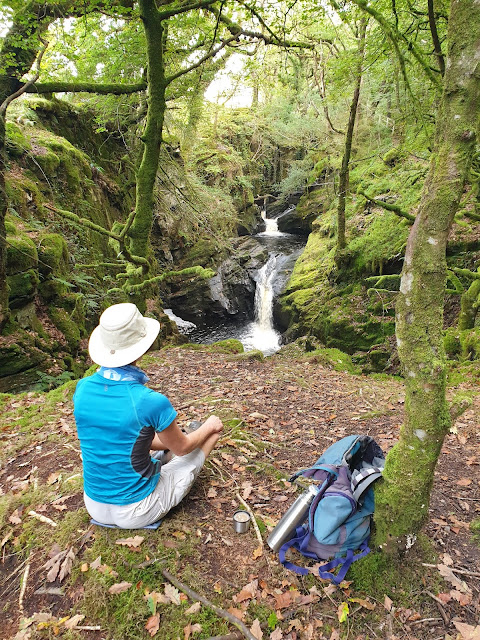 Before long we crossed a footbridge to return to the route of Walk 1, and an easy stroll back to the car, via a viewpoint of the Rhaeadr Cynfal waterfall. 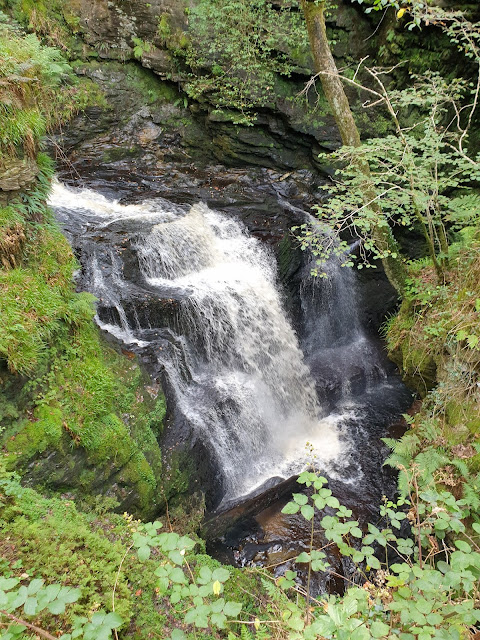 A little way upstream from the waterfall is a distinctive rock pillar, Huw Llwyd's pulpit, on which in the 16th century Huw is said to have sat and preached, maintaining the dual roles of clergyman and wizard!
Here's our route - 16km with about 500 metres ascent, taking us five and a half hours. A fine day out in lovely weather.