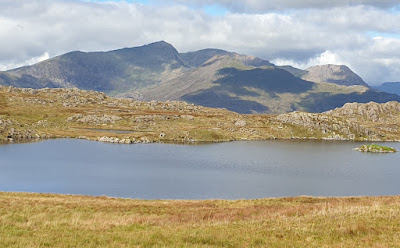 Cwm Croesor, walk 23 in Alex Kendall's 'Snowdonia North' book, was today's choice. His low level route contours between Llyn Cwm-y-foel and Bwlch y Rhosydd, but Sue and I couldn't resist the temptation of Cnicht, so we went up there from Llyn Cwm-y-foel and contoured back on a higher path, via Llyn Yr Adar, from which a view towards Snowdon is pictured above.
It's a short drive (7 miles) to the car park at Croesor, from where a new wooden bridge pointed us on our way up the valley. 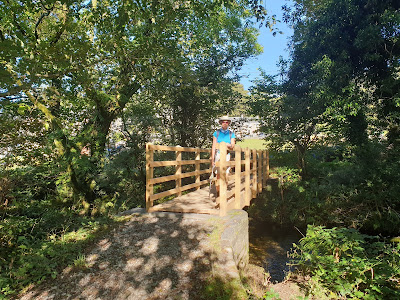 We'd not been this way before, having habitually taken the western ridge route up Cnicht. The path up Cwm Croesor was excellent, presumably following an old mine working track, passing fields bordered with slate fences. 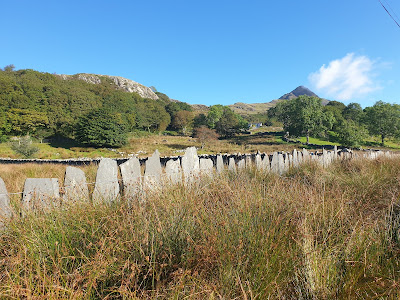 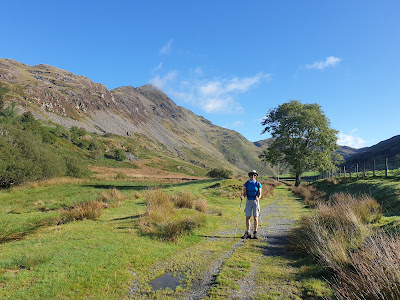 Soon we left the track and ascended a grassy path, rising above a lone building - the hydroelectric power station at Canolfan Blaencwm. Steep bits were rare, but there was a short thrutch after a couple of path signs that were situated, rather confusingly, just before a fork in the path. Luckily, Alex provided guidance in support of our intuition - 'go up'! 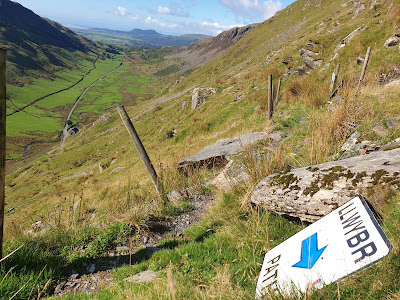 On reaching the dam at Llyn Cwm-y-foel, we enjoyed some elevenses, watched a grey wagtail, and tried to ignore two helicopters, one of which had flown noisily up the valley at least seven times. We then headed up over easy ground, albeit fairly steep in places, to the ridge of Cnicht.
On this ascent  we were studied for quite some time by a lone sheep, apparently chewing her cud whilst sitting on a warm rock and admiring the view. 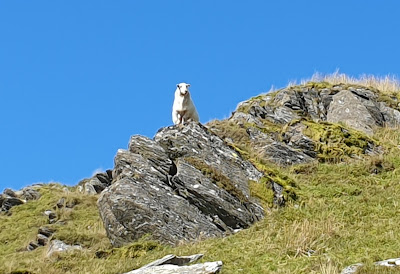 Once the ridge was gained, we were treated to some wonderful views of Snowdonia, and right down the Lleyn peninsular on this fine, clear, warm day. Here's the view past Cnicht's summit to Porthmadog and beyond. 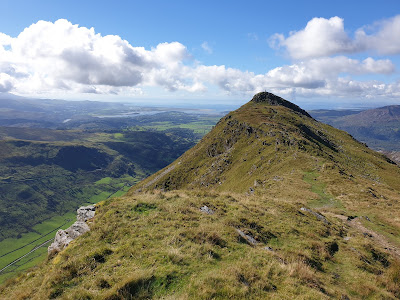 There were people up here. We don't encounter many of those on these walks. We chatted for a while, then headed along the ridge for lunch in the sunshine, with views across Llyn Yr Adar to the Snowdon massif. 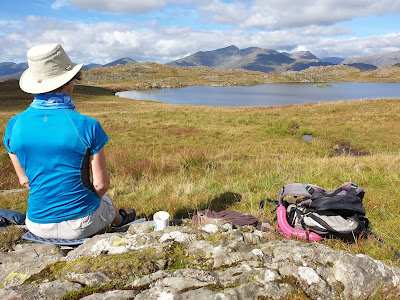 Two trial bikes muscled their way along the Cnicht ridge. That shouldn't be allowed.
It's a lovely path back to rejoin Alex's route near Bwlch y Rhosydd. We passed some locals who told us of the dangers of mountain biking and waterfall viewing in the Plas y Coed area that we visited yesterday. We also swapped some viewing notes:
African pigmy goose (seen by birdwatchers at Llyn Bach)
Buzzard, Kestrel, Grey Wagtails
Tormentil, Bell Heather, Ling, Bog asphodel
Our route took us near some derelict mine buildings and their associated infrastructure. 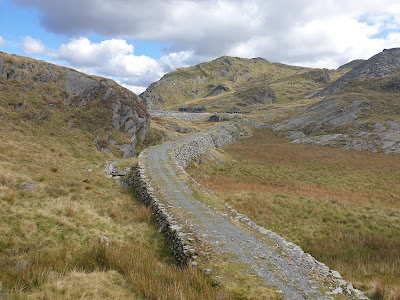 We arrived at the track pictured above, which reminds me of the Archduke's Paths in Mallorca and elsewhere, and we soon found the well signed path back to Croesor. 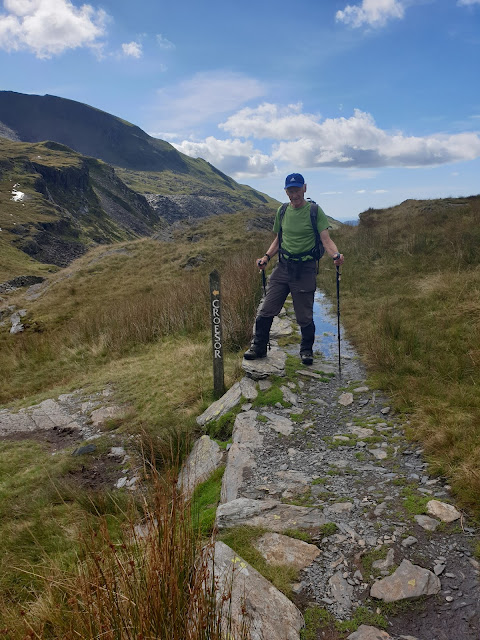 This is a lovely belvedere route past spoil heaps and inclines - an easy (and sociable) 3 km or so back to the car park. 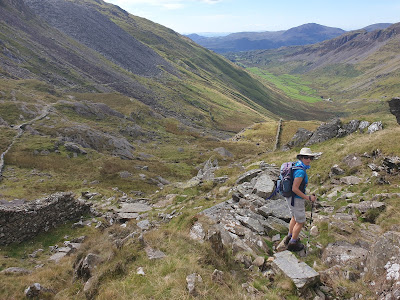 Here's our 13 km route with maybe 700 metres ascent. It took us a little over five hours. If you can click on the image to expand it, you might spot the light blue line that denotes Alex's 8 km outing. 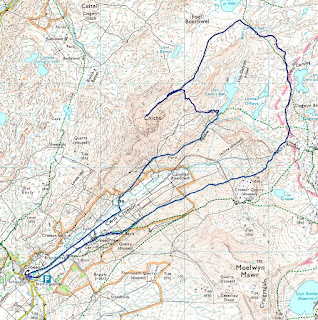 We were down by soon after 3pm, so had plenty of time to visit Plas Brondanw Gardens on the way home. The following snaps may not quite capture "the strong architectural influences of Renaissance Italy that are evident throughout the gardens: stone walls, topiary, pools, fountains, and avenues of trees". 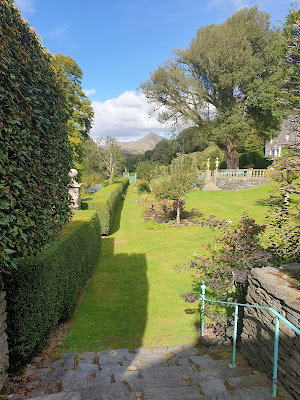 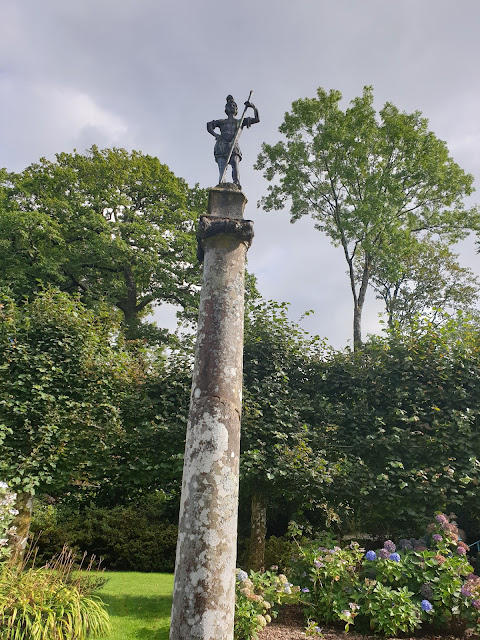 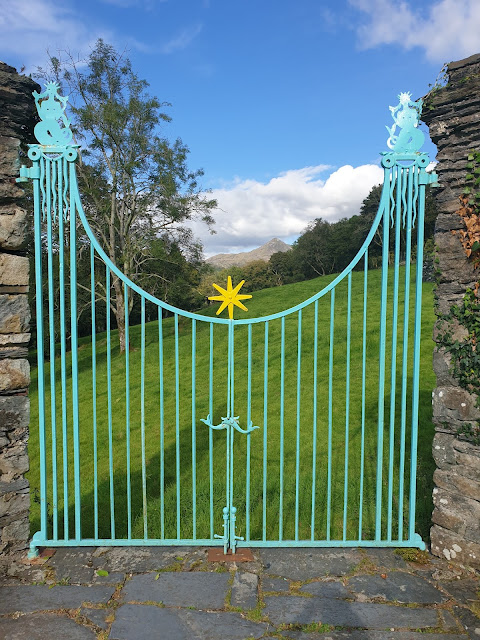