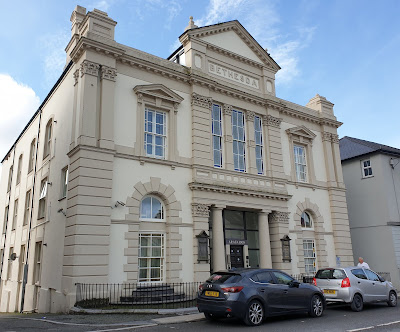 Today we enjoyed two separate walks from the free car park in the centre of Bethesda.

The first of them started past an impressive Town Hall building and crossed the Afon Ogwen to enter the woods of Coed-y-parc, where sunlight rippled through the trees on what was otherwise a grey day. 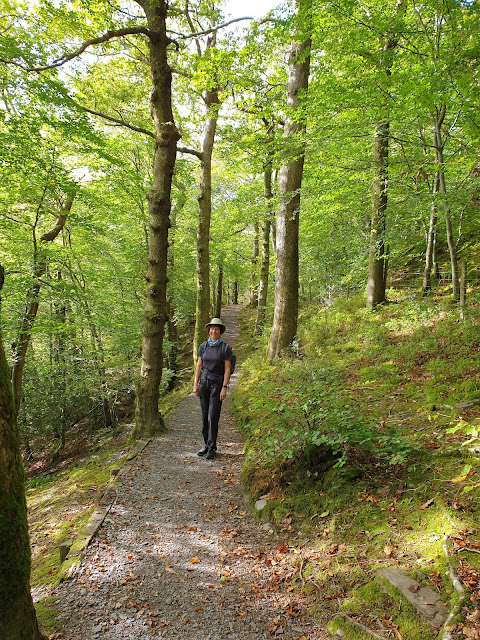 We soon found ourselves on a good path around the bottom edge of the Penrhyn Slate Quarry, with a good view back across the town. 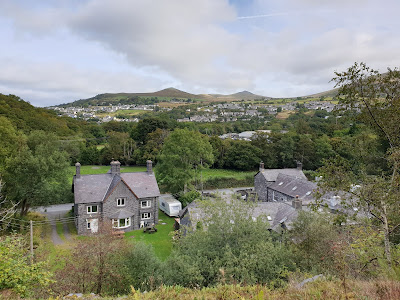 We seemed to be walking below a wall of slate. This is the bottom end of the vast quarry, from where slate has been extracted since the 16th century. Its heyday was in the 19th century, but the site is still in operation, as various hooting sounds confirmed today. 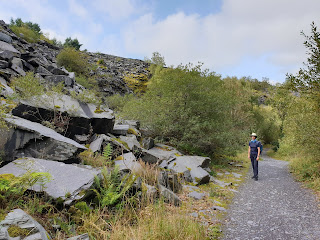 Our path left the vicinity of the quarry and at one point we walked between a stone wall and one of many slate fences that grace this part of the world. 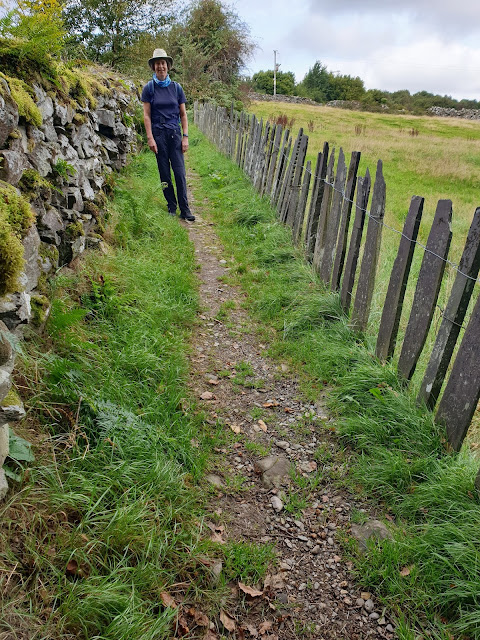 The fence marked a high point of this walk, with good views despite the greyness of the day. 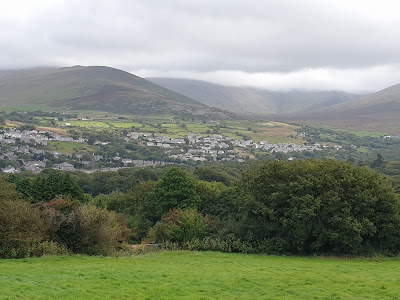 On return to Bethesda we admired some graffiti and enjoyed elevenses in a community garden. We learnt from an information board that there were once 27 chapels on the local Penrhyn Estate, where alcohol wasn't allowed. However, on non Estate land, public houses were built - 40 or so hereabouts. 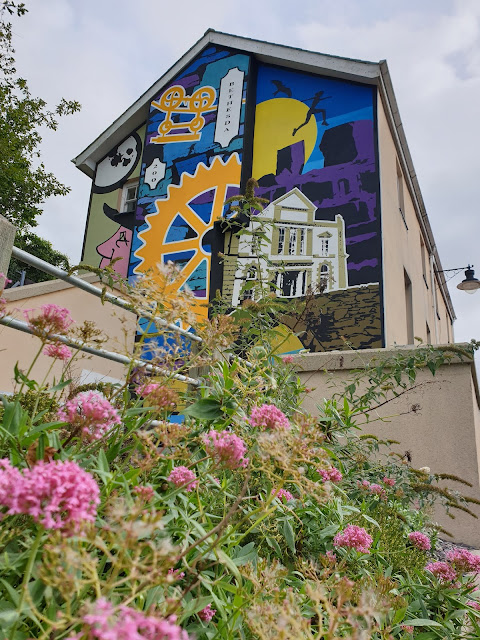 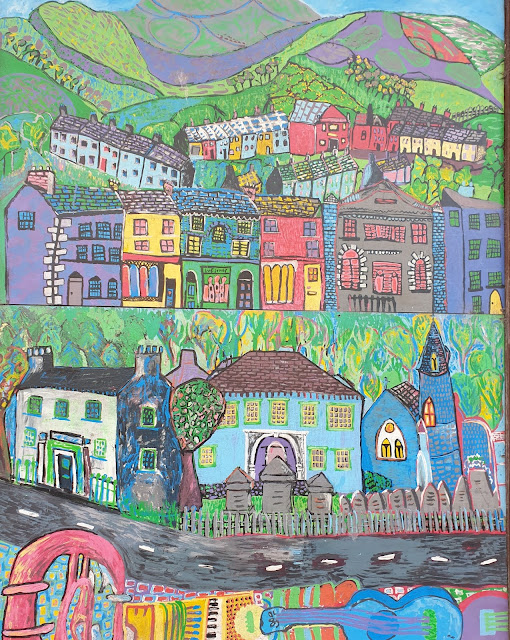 Here's our route. 5km with no difficulties, and a good way to spend an hour and a half or so in this area. The paths were quiet apart from a couple of dog walkers and a dog runner who assured us that his dog would not be taking part in the Lleyn ultra marathon for which his master was training. 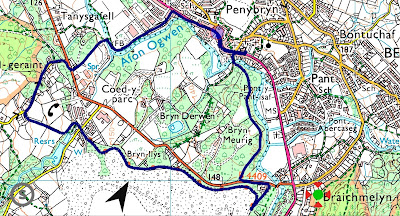 After our short tea break we set off again, this time from the other side of the main road, past the Jerusalem Chapel and a stone commemorating the great strike of 1900 to 1903. 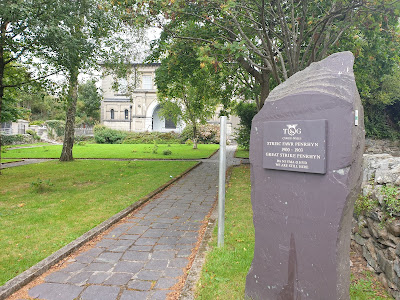 The first section of this 'there and back' walk up to Cwm Pen-Llafar was along a lane through the hamlet of Gerlan, from where there were good views across the valley to the area in which we had been walking earlier. 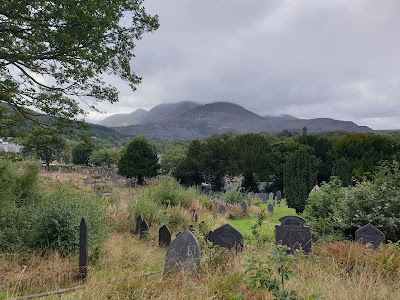 We eventually left the road and continued on a good path up into the Cwm. Four Welsh hikers studiously avoided eye contact with us. 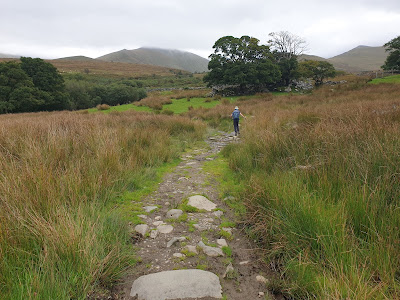 Lunch was taken near the Afon Llafar, where across the river are the remains of an old dam. Nearby, a shepherd was sounding more and more hoarse as he zoomed around on a quad bike trying to gather some sheep. 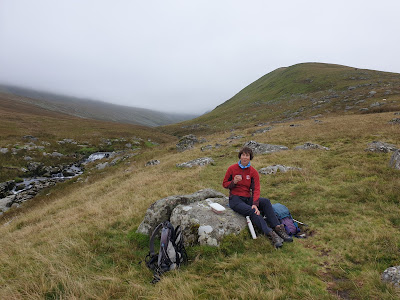 The mist was down, but a Navy helicopter flew manically around us, eventually practising landing in a nearby bog. 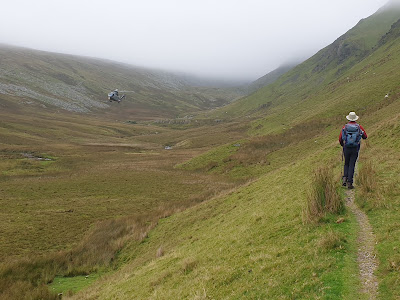 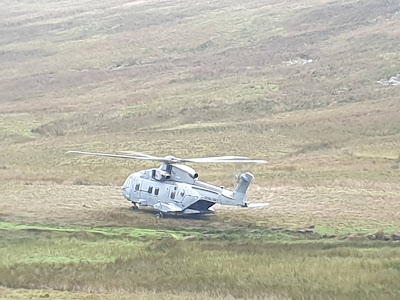 We got to our high point at around 500 metres - the end of the path. Sue went a little further and claims to have got a better view.
I watched as another couple and their dog slogged their way up a steep slope that may have given them access to the main Carneddau ridge in the vicinity of Carnedd Dafydd. 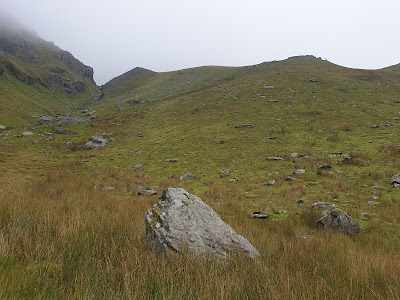 After that, for us, it was all downhill on the well graded path. 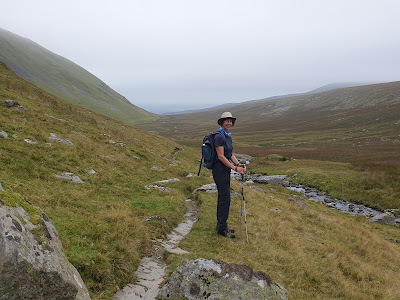 We noticed several feral ponies in the Cwm, which was also inhabited today by a lone heron and a large number of crows.
During the day we noted various wild flowers, including several that we'll have to identify later. There were swathes of Himalayan Balsam at one point, and elsewhere St John's wort, various ragwort type flowers, etc - as well as loads of berries, chestnuts, and rose hips. 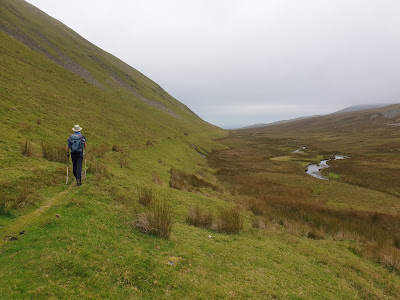 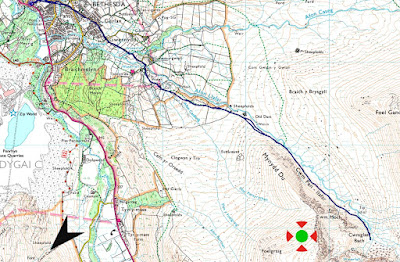 Your second walk out of Bethesda reminded me of a day stuck in Bethesda with a broken windscreen. While the car was at the garage we walked up that valley and did a loop on the Carneddau, saved the day — we were supposed to be climbing on the Idwal Slabs.
You both must be fluent in Welsh by now.

We just went to the end of the path - well, Sue went a bit further. It did look as if a loop to the tops would be possible, but with the cloud down we didn't bother with that...