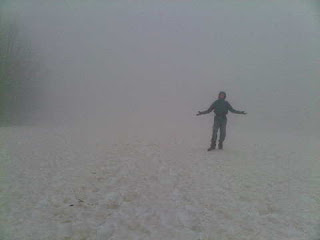 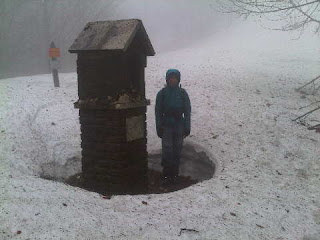 Last night we weren't, for a change, the only guests. Despite being an 'upmarket' hotel (with no doubt much higher prices in the main season) Bosco Verde opens its doors to children during term time. So we had the company of 40 or so ten year olds and their wards. All very jolly. They did of course both eat and adjourn to their beds much later than us.

Looking out of the window at breakfast time, whilst the higher hills were cloaked in cloud the sun was trying to break through. So we were hopeful...

After re-stocking our lunch provisions at the Spar shop we set off up to Il Capanno, with views back to Badia Prataglia. Then we headed up towards Passo Fangacci. About 45 minutes into the day's walk we entered the cloud. By the time we reached Passo Fangacci (pictured, top), we were tramping through soft, knee jarring, snow.

We found our way down to the monastic retreat - Eremo di Camaldoli - which luckily was still open for visitors. It shuts between 11.30 and 15.00. The church was beautifully decorated, with a wonderfully ornate ceiling. But the whole place, at 1100 metres, was shrouded in cloud. The coffee shop provided welcome elevenses.

We spent the next 4+ hours on the trail - Sue posed at one of the few distinctive features for the second picture of the day. Much of the walk was over old but soft snow, through which it was clear that two people and a dog had passed shortly before us.

Very occasionally we glimpsed a sunlit valley to our right, but where we were the cloud was sticking to the trees like dew on a spider's web. Full waterproofs were needed.

Eventually, around 4pm, after 19 km and 7 hours on the trail, we dropped down to the welcome sight of Rifugio Forli (1350 metres), where Marco, the guardian, rushed out to greet us. There were none of the usual Rifugio formalities involving removal of boots and waterproofs - we were hastened straight in for a pot of tea in front of a fire, with two Belgians, Francois and Camille, who had arrived shortly before us with a stray dog in tow.

Marco and his wife Christina have now managed to locate the dog's owner, who has a ten mile journey up here to collect it. Luckily it was chipped and a forest ranger turned up with a chip decoding gadget.

The rooms here are more like hotel rooms than Rifugio rooms; we have a double bed in our en suite accommodation. But the extra blankets may be needed...

Goodbye for now - it's beer o'clock.

When I saw that first photo I thought you were back in Scotland Martin!