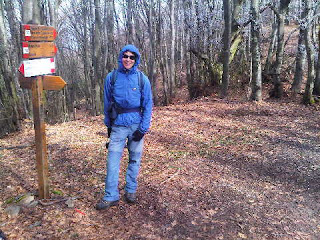 Weren't we lucky! I omitted to mention yesterday the help we got from Gillian Price regarding the train line to Sansepolcro and other transport issues. Thanks Gillian. And as I start to compose this entry a comment has arrived from Gillian to indicate that this morning's train derailed.

[Reception is intermittent, so I'm unable to respond to comments except from within this text, which may get delayed in transit - most people know the score by now.]

We weren't so lucky with breakfast. It was to be at the café across the road (presumably part of the Guidi empire) at 8 o'clock. Every assurance was given and they knew we were catching a bus at 8.25. But there was no sign of life by 8.05, so we gave up and breakfasted at the bus station café before boarding the Baschetti minibus that services the Arezzo to Pesaro route.

[Before complaining any more about the failure of our B&B to provide breakfast, we have to hope that the person who failed in their 'breakfast duty' wasn't caught up in the derailment.]

A half hour bus ride took us to the rather desolate looking Bocca Trabaria - the start of the GEA. A sign indicated that today's walk would last 7 hours, though we later discovered the GEA adds 30 minutes to that estimate as it doesn't follow the crest of the ridge all the way.

There was a chill in the air as we set off along the wooded crest of the Apennines that we were to follow for most of the day. After a while, showers of hoar frost confirmed that last night the higher parts of the ridge had been shrouded in cloud.

We saw nobody until we reached Pian della Capanne, which was fenced off as a building site where the refuge was being refurbished. A workman with a wheelbarrow lurked outside.

By now it was mid afternoon. It had been clouding over all day and light sleet was followed by a gentle shower of rain. We met two poncho clad walkers coming the other way, the only people seen on the trail today.

The final ascent of the day took us in rather gloomy conditions to the 1147 metre summit of Monte Verde, a nice little hill with fine views, its one drawback being its apparent construction from clay.

Consequently, our boots are just inside the door of Hotel Imperatore, our lodgings for the night. Nobody will want to steal them!

Inside the hotel, whilst enjoying a pot of tea, we chatted to a group of German speaking Italians from Bolzano. [Sue: "Do you speak Italian?" Group: "We are Italian!"]. They are walking a pilgrim's route, The Path of St Francis of Assisi (Sentiero Francescano), which coincides with the GEA for short stretch. "You'll be quicker than us then" one of them remarked "- you won't need to stop so often to say your prayers!"

It's good to have them here, they've made the sun come out again.

This trail is perhaps a mini European counterpart to the Appalachian Trail. It has its quota of woodland, as demonstrated by today's picture near the start of the trail. [It was chilly - we are used to that - 'good walking weather'.]

The Garmin gadget says we've gone 21.5 km today, in 7 hours 10 minutes. I'm sure we've climbed more than Gillian's estimate of 600 metres in her guide book, but that statistic will follow when we get home and download the data that's hidden somewhere inside the Garmin gadget.