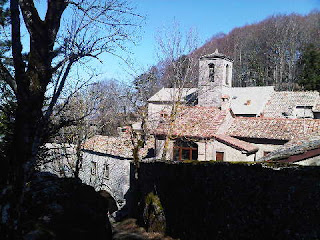 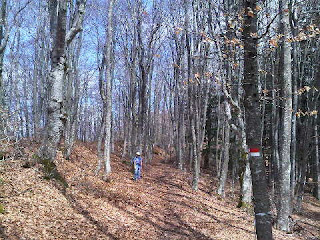 Thanks for your comments, Conrad Jules and 'ipad Gibson'. Yes, it's a good time to do this trek, though we seem to be in a minority with that view. Last night we were again the only guests staying at our hotel, though an elderly couple did pop in for a meal whilst we were enjoying our feast.

It's an easy undertaking, with no technical difficulties, so don't expect anything dramatic!

Today we rose to a clear blue sky and a bevy of chatty blackbirds, who, like the jays and blackcaps we've been seeing, are busily collecting nesting material.

Swallows and martins have also arrived and are busy harvesting whatever insects they can find, but unlike on some of our summer trips we do not have a 'fly problem'.

Instead of the GEA route, we chose to start along path 51, which rose gently through groves of towering beech trees diffused with light and bird song. It was a lovely path despite the occasional wild boar scrapings that have been with us since the start of the trek.

The La Verna religious sanctuary (pictured from the outside) is a huge place. We strolled inside the walls and visited the Basilica. But we had to reluctantly move on, today being a longer day under a clear sky but with a pleasantly cooling breeze.

Snow capped peaks drew our eyes west, but they gradually slipped further into the distance today.

A lot of waiting around for Sue's flower pictures was encountered - I hope they are prize winners!

Cuckoos, willow tits, and bright yellow butterflies joined us for elevenses on a sunny corner of the path with fine views.

The path then proceeded delightfully for some way, until reaching Poggio Tre Vescovi (The Hill of Three Bishops). Here we paused for lunch and the sky began to cloud over.

Path 00, which follows the main spine of the Apennines, was rejoined here. We headed along the crest of the spine for the rest of the day, generally on a broad path with steep drops to either side. Gillian is not over enthusiastic about the views from this path, but apart from a short section of pine forest the trees - mainly beech - merely presented a 'trunk slashed' version of impressive views in all directions. When there is no foliage, it's easy to ignore the trunks and branches in the foreground of the view, though the camera is not so sure - leaving the best images arboreal ones (lower picture).

After 27 km and 7 hours 30 minutes we reached our destination after 3 km along a quiet road. In her guide book, Gillian describes Badia Prataglia's Hotel Bosco Verde as 'upmarket', but it's actually cheaper than last night's guest house (that inadvertently diddled us out of a few Euros - always check the bill!) and here we seem to be enjoying our usual exclusivity, with personal service of the highest order from Marco. The gap in our quest for accommodation has been resolved, and everything looks set fair for the rest of the trip.

I'll send this before being distracted by the menu and the decision as to what should follow my large beer.

Another large beer! You know it makes sense. Enjoy.