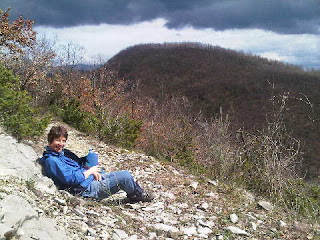 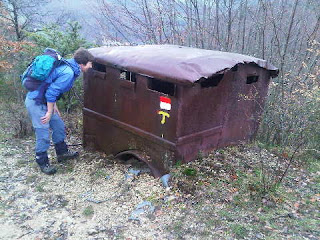 It was to be a fairly short day, so we fancied a lie in. Unfortunately that plan was foiled last night when Maura announced (after plying us with beer, wine, and a delicious meal of pasta with ragù, followed by mixed ribs and wild boar sausage with chips, etc) that today was her day off and breakfast would be at 7am.

We could hardly complain though, when at 8am this morning we got our bill for half board, beer, wine, coffees and a flask of tea and packed lunch - €55, for the two of us.

We'd woken to find the hotel enveloped in cloud, so we set off in rain, clad in full waterproofs and feeling pleased that we had brought gaiters and boots. We had considered using trail shoes but were right to choose boots.

After yesterday's largely excellent paths it was disappointing this morning to have to share our 10km route to Pieve Santo Stefano with the tracks of trial bikes. But the scenery, insofar as we could see it, was lovely. Today we encountered more oak woods; yesterday was predominantly beech.

We diverted to Eremo di Cerbaiolo, a sanctuary founded in 722 by Benedictines, on Gillian's recommendation. Sadly, the 'custodian and her boisterous herd of acrobatic goats' were not there. The current custodian, Francesco, explained that the old lady died three years ago at the age of 85, and that her sister had then looked after the goats until she was hospitalised, when they had to go...

Coffee and cake was enjoyed with the locals in a café at Pieve. There was a double page spread in the paper about yesterday's train derailment - 'Many injured - operator accused of poor track maintenance.'

After that the rain stopped and the sun emerged. The trial bikes had not churned the paths to Caprese Michelangelo, so we enjoyed a very pleasant three hour stroll to that hilltop village.

Today's pictures are from that part of the day - lazing in the sun near the end, and one for Alan R to identify, but judging by the condition of the bodywork I would guess it's an Alfa Romeo.

We checked into Hotel Buco Michelangelo, kindly booked for us by Maura last night, soon after 3pm, our 20 km walk having taken a leisurely 7 hours 15 minutes.

That gave us plenty of time to look around the Michelangelo museum. The great man was born here in 1475.

Come on Martin! Give me half a chance at least.
Have a great time.