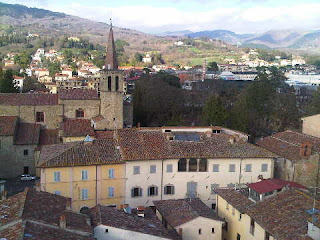 We slept in this morning due to the room being silent and blacked out, but we still managed a leisurely breakfast and a trip to the station's Spar shop, which is open from 7.30 to 21.30 every day, so no need to bring provisions from the UK.

The timing of our start of this trip was a bit of a faux pas, as Italian transport on Sundays is sparse and erratic. The 9.30 train to Foligno left closer to ten o'clock, leaving us there at 11.30 with an hour and a half to while away in the pleasant town (coffees outside in a sunny square - bliss!) before continuing on to Perugia Ponte San Giovanni. That was just a 25 minute journey.

The Trenitalia staff in Rome had denied all knowledge of a railway station in Sansepolcro, to which town the normal route would be the Florence train to Arezzo then a bus to Sansepolcro, and onwards to the start of our walk. But the buses don't run on Sundays so we tried this alternative route via Perugia PSG.

Our downloaded timetable showed lots of trains, and we had booked a hotel, Locanda Guidi, in Sansepolcro. What could possibly go wrong?

Not a lot! On arrival at Perugia PSG the man in the Trenitalia ticket office shook his head gravely and directed us to the bar. Tickets for the hour and a quarter journey to Sansepolcro were duly produced from behind the counter in exchange for the princely sum of €4 each, bringing the cost of today's travel to around €26 each.

A bench in the sun in a wild flower meadow provided a good luncheon venue until we had to withdraw to some shade as the sun tan cream needed to cope with our sudden exposure to 24C was too deeply packed.

The hour and a half break until our train on the Umbria Mobilita line to Sansepolcro soon passed, aided by Ken Follett's 'Fall of Giants' and Graham Ratcliffe's rather contrasting 'A Day to Die For'.

The Umbria train then chugged up a picturesque valley to reach our day's destination soon after 4pm. The Locanda is in the centre of this ancient walled town, the most important (historically) in the Tuscany Upper Tiber River Valley. We wandered at length, locating tomorrow morning's bus stop and encountering a treat in the Campanile. This tower is not usually open to tourists, but on bell-ringing Sundays the ringers allow folk to sample their rickety ladders and indulge themselves in panoramic views across the rooftops. Today's image is the view towards Bocca Trabaria, from where we hope to start our GEA walk tomorrow (albeit it's a bit off our map!).

hi you two - have a brill trip! Nick and are currently walking in the Lake Trasimeno district not far away. You may be interested to know that the train to Sansepolcro derailed this morning due to a landslide... no victims thankfully but several pax in hospital. Best Gillian