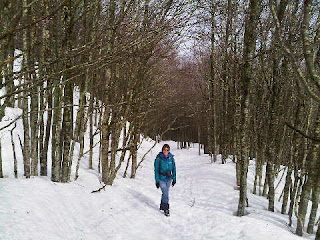 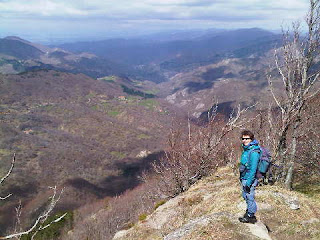 The cold Apennine wind huffed and puffed and whistled all night. Extra blankets were needed in our 8C room.

Marco and Christina gave us a good breakfast, then Marco headed downhill to reunite Olaf with his owner, whilst the four of us, me, Sue, Francois and Camille, set off across the snowfield towards Monte Falco, perhaps the highest point of this trip at 1657 metres.

We left the Samsung phone found yesterday with Christina - we couldn't get it to work.

It took the best part of an hour for Sue and me to reach the summit, as we were taking care in the soft snow to avoid painful knee jarring. Approaching the summit, we met a lone skier on his way down, and after enjoying a cuppa on top - and waiting in vain for some views - we headed down. F and C had by-passed the summit, but a couple wearing snow shoes were heading up at a good rate.

It felt as if we were in Gatineau Park, and we felt odd and out of place in walking boots, which were not ideal footwear for the conditions.

Soon some views appeared, the sun came out (top picture), and we really did feel we were back in Gatineau Park near Ottawa.

After a while we came to Passo Piancancelli, where F and C were waiting to say their goodbyes as they were descending from here to catch a bus to nearby Florence.

They missed a treat, as the rest of today's paths were wonderful.

Eventually, after 6 km in soft snow, we dropped to around 1300 metres and lost the white stuff. Soon we were on a fine belvedere path, passing irresistible clumps of Hepatica, Alpine Squill, Snowdrops and Primroses. Views stretched from Monte Falco's snowy summit to beyond San Godenzo far below in the valley (pictured, below).

Lunch was taken in a sunny spot (20C here) on a knife edge, before we continued, reaching Passo del Muraglione at around 2.30pm, after 15 km and 5 hours 20 minutes on the trail.

Whilst it isn't open as a hotel at this time of year, the albergo at the pass was doing a roaring trade, with scores of motor cyclists enjoying the switchback mountain roads on a sunny Saturday.

As the hotel wasn't open, we'd booked a room at Albergo Silvano, 500 metres lower down in the village of San Godenzo. But how to get there? A two and a half hour walk, or a two hour wait for a bus? We chose a third option and ten minutes later we piled into the seatless rear of an old Fiat people carrier, lying low to dodge the eyes of the Carabinieri as we lurched down the hill on the short journey.

San Godenzo, the birthplace of Dante (The Divine Comedy), is a village with a fine Romanesque abbey, where we admired the mosaics before booking in at Albergo Silvano. We needed provisions for a couple of days (tomorrow's Posto Tappa doesn't do meals) so were relieved when the alimentari opened at 4.30. I recall the days when everything shut from noon on Saturday until Monday morning, resulting in logistical issues for backpacking trips that inevitably started with a Saturday morning flight, particularly relating to camping gas.

Our only problem now is the lack of a Sunday bus service - and we have a long enough day tomorrow without spending an extra three hours at the start lugging a load of groceries up a hill!

Couple of nice pics there!

I must confess to having heard of the GEA only in fairly vague terms before, but it looks smashing. Quite a bit of variety of trail and scenery, too, if your photos are anything to go by!

I'm enjoying your Apennine trail and trying to find all the places on my inadequate map:-)
Good news from Kate and Simon! I had a happy talk with Kate on my birthday. Luck was certainly with you on the start to your holiday!
Hope you continue your good progress-sounds like you are being fed well.
R & C send best wishes, too!
Love to you both!