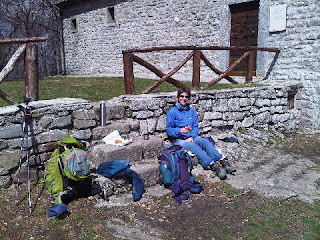 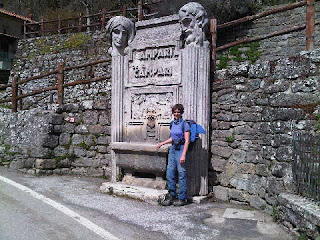 Firstly, hearty congratulations to Kate and Simon. I should be a grandad (again) in October.

This was another short but very pleasant day.

We were the only customers last night at Buca di Michelangelo. We got the sole attention from the staff. The highlight of the evening was our antipasti course - almost a meal in itself, featuring three types of bruschetta, a plate of assorted smoked meats, a bowl of mushrooms in a delicious sauce, cheese and mushrooms on fried bread, and a dish of crispy salad with crispier prosciutto.

We met just two people on the trail yesterday and none today, although we passed a few villagers. We are before the main season. The whole trip (apart from sightseeing in Rome) is an experiment. It's an attempt to start our Alpine trekking season a little earlier than usual. We therefore chose an easy route on which we didn't need to rely on mountain huts, most of which don't open until mid June. We can do half of the GEA route in this way, but will have to return in the summer to complete it, as the later stages rely on mountain huts. The plan is working. Whilst not hot, the weather is pleasant - albeit a little damp at times - and there is little evidence of the biting NE wind that was really starting to get us down in the UK.

The scenery is more Welsh than Alpine, but there's not a wind farm in sight. The trees are only just starting to come into leaf, and there isn't the usual plethora of mountain flowers. But the spring flowers are lovely, especially the Alpine Squill, Purple Crocuses and Hepatica, and the sparse foliage means the views through the trees are extensive and the birds, albeit still very shy, are more visible. For periods we are joined by cuckoos, which is about the only likeness between this walk and my next backpacking trip, the TGO Challenge walk across Scotland.

Anyway, after some overnight rain, today dawned bright and sunny. It looked like a typical 'April showers' day, but they never arrived.

After dragging Sue away from the hotel cat, a short walk down the road saw us reach the hamlet of Lama at 516 metres. It was a pull from there up to Fragaiolo and its welcoming alimentari. Coffees, and panini and fruit for lunch, were happily supplied for a modest outlay.

The tarmac continued for a while as we headed up a quiet lane past sweet chestnut trees, encountering a friendly dog called Lack. After dragging Sue away from Lack's affections we continued along a rough but motorable track (the inevitable Fiat Panda was the only car we saw) inexorably up to Eremo La Casella, at 1263 metres.

We lunched here (pictured) in warm sunshine, just as St Francis did on his return to Assisi many years ago in the 13th Century.

After inspecting the chapel and the rather smart bothy (apart from the lack of beds, no water, and blocked toilets) we continued along the Apennine sub-crest, on a delightful path with fine views across to tonight's destination, Chiusi La Verna, in an increasingly downhill direction, until we reached the bottom of a canyon.

A slow, hot, but blissfully short ascent led to the fountain used in a 1931 Campari advertising campaign (pictured), from where we headed to the 'Centro Storico' to enjoy the remainder of our tea beside Adam's rock, supposedly used by Michelangelo in the Sistine Chapel.

From there, a short stroll took us to our guest house/restaurant for the night, Da Giovanna, where we booked in around 3pm after 17 km and 6 hours on the trail. It's a lovely spot - we have a large sunlit room with fine views. Afternoon tea is currently being served.

There is no sign of any other guests, though we were greeted by the question "Are you the ones who wanted your bags carrying?" We aren't, and moreover Sue has graduated from bum bag to small rucksack, so she is able to carry her own personal items on this trip!

PS Sorry Alan, I just thought I'd make it easy for you to confirm the obvious! Alfa - no doubt about it, they all rust like that...ha! Hope your own trip went well btw.

Just catching up with your trip which i am enjoying. The early season start is the best way to do these treks.

Like Sir Hugh, I've just been catching up on your recent adventures. Keep it up, the weather here seems to be moving from winter to warm ..... and wet. :-(

Like the others, I too am catching up with your trip and enjoying it. My excuse for tardiness is that I've been playing with my new iPad Mini.