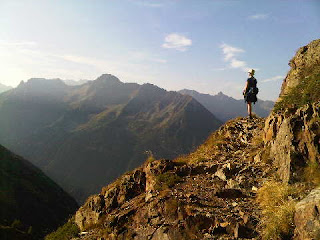 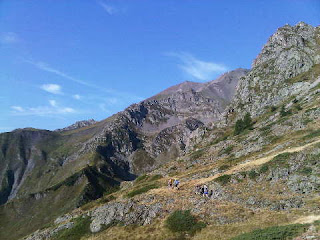 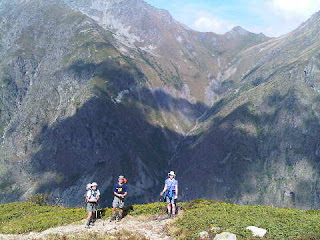 Roy devised his own alarm system whereby the volume of his snores grew louder and louder until, at 7.15 precisely, they had woken everyone in the room including himself.

The couple running the refuge were a little strange; perhaps they were on something that made their behaviour a little erratic. Breakfast arrived in small quantities until more was requested, then it came with a smile. Some puzzlement was exhibited when the guardian arrived with our coffee, only to find we'd filled the only bowls provided with muesli. He simply waited for us to finish the muesli before pouring the coffee.

Sue's 'tea' arrived in the form of a jug of hot water. Eyebrows were raised when she was cheeky enough to ask for a tea bag. "Heathens" observed George, the Chilean Francophile.

By 8.20 we were ready to join the short string of trekkers who were heading for the Col de la Vaurze (2498m). It was another cloudless morning, with clear visibility thanks to last night's storm. The day remained sunny throughout.

For the first hour we enjoyed an undulating belvedere path that headed deep into a combe punctuated by rocky spurs and stream-cut gullies. Sue is pictured (top) crossing one of the spurs. A young Belgian couple soon overtook us, leaving just the campers behind us.

It was a delightful path (pictured - middle) in perfect weather. Soon the slope steepened for the final 400 metres up to the col, but the path hardly got any steeper at all, instead choosing ever lazier zigzags past recumbent sheep and hovering birds of prey to manoeuvre its way up the hillside and eventually reach the fine vantage point of Col de la Vaurze, from where our destination for the day was just visible as a collection of rooftops 1200 metres below us. There were of course many fine mountain views from this spot, including 3564 metre d'Olan to the east.

We were last to leave out of the little group of GR54 trekkers at the col. The descent was at first quick and easy, then care was needed to cross a few steep gullies. A grassy spur at 1900 metres provided a fine venue for a lengthy break, near a shepherd's hut with a tethered goat. Susan had a long chat with said animal but has so far declined to share the wisdom imparted to her.

The entire descent offered a clear view of tomorrow's route to Col de Côte Belle (pictured - bottom) and as we continued down to Le Désert we paused frequently to admire that view and the fine vistas north east to the ring of mountains at the head of the Vallée du Valjouffrey.

Lower down, we passed through ancient walled lanes lined with crocuses and red berries, beside meadows intermingled with piles of rocks (cleared to form the meadows) that made the area look like a golf course from above.

Our accommodation in Le Désert, booked by Sue back in June, was to be at the Bar des Écrins, which we guessed would also serve lunch. We arrived at 1pm to find it conclusively shut. Luckily, further down the road at Auberge l'Eterou, Marie Claude was able to offer us a three bedroomed holiday house in a nearby building, and half board and a packed lunch (the shop we'd hoped for was at Bar des Écrins) for €55 each. She lost an arm (so to speak).

Somehow we'd managed to overtake the rest of the GR54 brigade, and soon they were milling around outside our gated courtyard. We peeped over the fence to say hello and wish them well in their quest for lodgings and provisions.

Meanwhile, Susan, Roy and Ken managed to produce from the hidden depths of their bags enough bread, cheese and salami to provide plenty of lunch for the five of us.

Thanks, Alan R, for your comment (there may be more but we have no phone signal in Le Désert!). I don't think I'll have the Blackberry for much longer, and the negligible cost of postings and messages isn't a problem; and I've yet to enter the mysterious world of 'Apps'!

Five other trekkers were located at the gite that is apparently connected with the Bar des Écrins. It's some way from the Bar. We had no way of knowing. Anyway, it seems they may have taken our places at that gite. We aren't complaining. Whilst they had beer, we had three separate bedrooms and a well fenced garden in which Sue and I could spend an hour or two in our underwear whilst we washed and dried our trousers for the first time on the trip.

Ken could do his exercises (as if the walk wasn't enough!), and Susan and Roy strolled up to a cascade and back. Gulian seems to have gone home, and Jean Francois, the camper, has disappeared.

Next Day
Previous Day
Back to Index
Posted by Phreerunner at 09:48