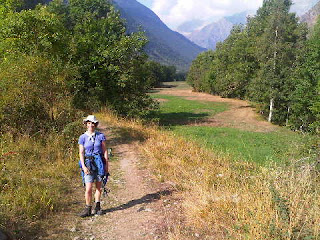 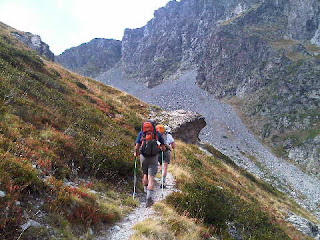 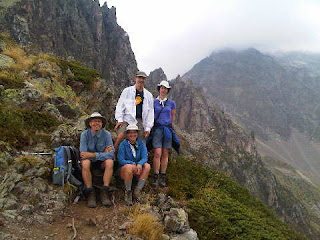 Our longest day of the trip - on excellent paths throughout.

We were early to bed and early to rise for the basic hut breakfast. By the time we left at 7.15 it had been light for about thirty minutes and the sun was glinting enticingly on a distant summit. More photos were taken of the idyllically situated refuge and its reflection in the lake.

A switchback path got us down a few hundred metres, then a good undulating path over easy ground past a crowded but completely silent pen of sheep led eventually to Refuge du Clot, where the guardian jokingly asked for money when Sue wanted him in a photo of the refuge.

He charged just €1.30 each for our coffees - very reasonable. It looks a nice refuge, and several of those who we met at Chaumette stayed there last night, but its location doesn't compare with that of Vallonpierre.

Beyond Clot, a series of delightful paths led to La Chapelle-en-Valgaudemar. They took us down ancient walled lanes and through woodland where the sun's dappled light played with shadows on the tree-lined paths.

Open fields (pictured - top) and narrow ways etched into steep slopes also featured, and on the final approach to La Chapelle our eyes were drawn across the valley to the spectacular Cascade de Combefroide, beside which we would shortly ascend.

La Chapelle was buzzing with people. It's clearly a popular tourist destination. A pleasant little village with a food shop and a couple of cafés, one of which Sue and I utilised to enjoy a first lunch of what turned out to be deep fried potato croquettes.

Supplies duly replenished, we set out after a chat with Alain, and with another totally unconnected stranger. At Vallonpierre, Myriam had pointed out a route that she said was much better than that taken by GR54. We took it. Over Col de Colombes. It was a long, steepish, 1300 metre ascent, initially past the Combefroide cascade. This wasn't so spectacular close up, as you could only see a small part of it at any one time.

We climbed the first 900 metres at a good pace in less than two hours. There was lots of ling (heather) just about in flower to brighten our journey. Small birds of prey hovered nearby, and the constant chirping of grasshoppers and flitting of butterflies distracted us from the steadily increasing cloud cover.

Lunch (second instalment, usual fare) was taken at around 2000 metres beside a burbling stream, then we headed up the final 400 metres to the col. Susan and Roy (pictured - middle) zoomed on ahead whilst Ken was today's stalwart backmarker. There were fine views of other enticing higher paths leading to the Breche de Roland like Pas de l'Olan.

Skies were uniformly grey by the time we reached the 2410 metre col, where the others are pictured (bottom) shortly before the first drops of rain.

Col des Clochettes soon came into sight as we hastened past a small lake that in sunnier conditions would have seen some of our party baring all. We passed George, a Chilean who lives in Paris and Barcelona, and his lady friend Morgan. It drizzled a little as we descended to the small but perfectly formed Refuge des Souffles, which turns out to be virtually full tonight, with nearly 30 visitors. We again have a dormitory to ourselves!

After Roy had gone bilberry harvesting, and various ablutions had been achieved (washing clothes, showering, etc), we watched a storm outside before adjourning to the crowded dining room where we enjoyed the evening in the company of the aforementioned George and Morgan, and Peter from Malvern, the first Brit we have encountered since starting our walk over a week ago.

A number of the people we met at Chaumette two nights ago are here, together with a large guided party. Jean Francois, camping outside but dining in the refuge, confirmed our thoughts that the GR54 route from La Chapelle is not as good as our Col de Colombes route, due to a 'steep and hot wooded path with lots of flies' the way he came. Others agreed that the Colombes route is to be commended.

Thanks everyone, they are appreciated. And sorry about the build up of postings - we went for over three days without a phone signal, a record for me in nearly five years of blogging.

Next Day
Previous Day
Back to Index
Posted by Phreerunner at 07:20

Another smashing post. You do very well getting your posts out Martin. I struggled in Gairloch.

Before i forget. Have a look at WhatsApp for blackberry when you get back home. It's a very cheap way of posting messages etc.

Greetings from Helen,kinda and Lisa in steady brook newfoundland where we are enjoying the tail end of hurricane Leslie and some wine :_)