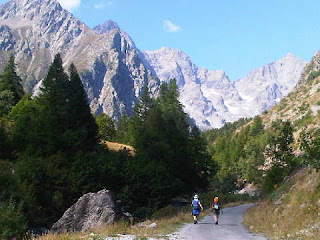 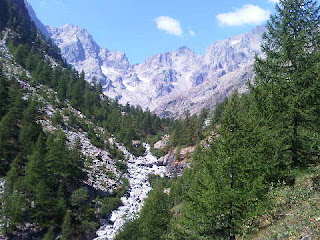 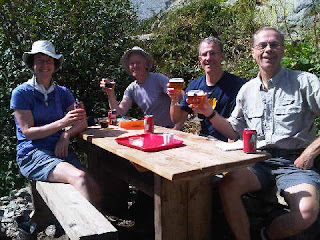 Approx 12 km with 950 metres ascent, in 4 hours 30 minutes including breaks totalling 40 minutes. Plus assorted extras in the afternoon.

The predicted sunshine arrived today. Once again we spent little time on GR54 as we'd planned a side trip to the small Refuge des Bans, as insurance against bad weather.

So it was a leisurely departure from the pretty village of Vallouise, where the Thursday market provided all manner of enticing goodies for some of our party's lunches for the next few days. Food shops will be a rarity as we have now entered the more remote southern areas of the Écrins region.

Last night's gite accommodation was in the classic French style - cheap, homely, with good food (including a cassoulet with chicken and broccoli) and wine on the house. Well done Denis and Maryline.

A good track along the left side (right bank) of the Torrent l'Onde took us as far as a small campsite at Pont des Places, then we forsook GR54 in favour of Maryline's suggested path which continued on the right bank of the river. This made for an entertaining half hour or so, as the path narrowed and undulated before finally crossing a bridge to reach the tarmaced road near a small chapel. A few minutes along this quiet road (pictured - top) saw us reach the road head at Entre-les-Aygues, to which we will return tomorrow.

Before leaving Maryline's unsigned path we stopped abruptly to admire an adder that was sunbathing on the path. We don't often see snakes in the Alps. Today there were also lots of lizards about, whilst dippers and grey wagtails flew up and down the torrent, and nutcrackers, jays, willow tits and great tits were noisy in the woodland. Wheatears and redstarts followed our progress above the tree line.

My thermometer read 29C. It was hot going along the excellent path to the Refuge (pictured - middle, with the refuge hardly discernible in the distance), which we reached a couple of hours later, having taken a half hour break in the shade for lunch.

Sue and I had enjoyed a very modest lunch on the trail, so omelette and chips went down well with some cola, whilst the others duly supplemented their earlier cheese and baguette lunches with cold beers (pictured - bottom).

Refuge des Bans is 'guarded' by Alice and Stéphane, who makes excellent chips.

We met quite a few day walkers returning to their cars after lunch or snacks at the Refuge. But tonight just the five of us are staying. So we can choose our positions in the 22 bed dormitory. The washroom comprises an outside tap, and the lavatory is in an outhouse that may be interesting to locate in the dark.

This afternoon Ken went to play in some snow whilst the rest of us headed up a vertiginous path behind the Refuge. I soon gave up and stopped to compose this entry. The others went some way further but didn't gain a significantly different view to that from the refuge - see separate posting.

Next Day
Previous Posting
Back to Index
Posted by Phreerunner at 09:37

Good choice for your food shopping - Vallouise has one of the best weekly markets in the area! Enjoy your walk!

Thanks Laura, it was a shame Sue and I didn't want to carry much food, and yes, we did very much enjoy the walk.