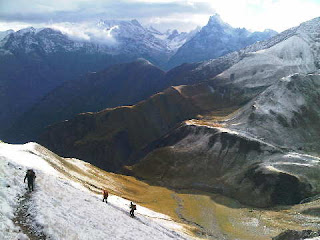 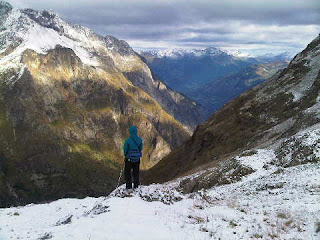 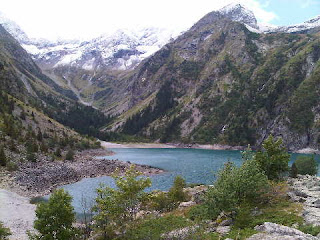 Another great mountain day to bring the GR54 tour to a conclusion.

At 3am it was snowing outside our dormitory. By 7am we were shuffling our way from the dorm to the dining room for an ample breakfast. Some of those who had been keen to shoot off early on previous days were late risers today, notably the Belgian couple and three French, one of whom was probably still upset and depressed after losing his GPS yesterday. We do hope it turns up.

We established from the guardian that the route over Col du Vallon should be safe, and set off at 8.20. It was an easy 400 metre ascent to the col despite the fresh snow. JF and Steve went ahead, the three French followed, and the Belgian couple plus a fourth French descended (we think) via the easy path to Bourg d'Arud. The two jolly German campers followed us but they weren't seen again today.

The top picture shows a view back towards the refuge from our ascent to the col. A winter wonderland.

Steve and JP were loitering at the col, but soon buzzed off whilst we found a sheltered spot to wait for Ken, who has a painful knee. It was quite cool in the snow at 2531 metres, though the wind was fairly light.

A careful, albeit easy descent led down towards Lac Lauvitel. All too soon we reached the lower margins of the snow, above 2000 metres, from where Sue is pictured (middle) with the hills beyond Bourg in the distance.

The three French caught and passed us as we continued over steep ground around rocky bluffs to reach Lac Lauvitel (pictured - bottom) at 11.20 am. We spent 45 minutes at this beautiful spot, where we enjoyed an early lunch of bread, cheese and salami - the uneaten portion of yesterday's packed lunch.

Resuming our route soon after 12, we paused to photograph a very bold marmot (visitors feed them here), before climbing a rocky path to gain more views of the lake. A well constructed path then descended steadily, and all of us removed layer after layer of clothing.

We continued into zones of shrubs, then trees, with a river flowing noisily beside the path. Our plan of stopping at La Danchère's buvette failed, as it was closed, but we looked into the small church with its mosaic glass windows, and ate our remaining supplies on a bench.

Back on the path after some adventures with a footballing dog, we passed huge 7 inch diameter mushrooms, then descended on the left bank of a river, coming out at the hamlet of Les Gauchiors.

Then it was a track through woodland in dappled sunshine, avoiding large puddles, for some way. But it was flat, easy walking, with a few flowers for interest, not far from the Romanche river.

The streets coming into Bourg d'Oisans were plain, but adorned with huge, colourful hanging baskets. So it was that at 4pm our 13 day GR54 circuit was closed and we joined Steve outside a street corner café for celebratory drinks.

Later, after the pleasure of rooms with baths in Hotel des Alpes, we enjoyed more beers, together with Steve and JF (who turns up like a bad penny at the very mention of alcohol), before all seven of us adjourned to La Muzelle for an excellent meal and a treat from Ken by way of some real bottles of red wine, a nice change from our usual litre pichets!

Then we had a good sleep before travelling home. As I write (10pm Friday) some are still travelling. Bon voyage, thanks for your excellent company over the past fortnight, and by the time you read this we hope you have arrived home safely.

Postscript
Previous Day
Back to Index
Posted by Phreerunner at 22:10

Excellent trip and a grand last day. Scenery was stunning.

I have been looking back at my Tour of the Oisans in 1999, and I see that my guide was written by Andrew Harper, but it still apparently followed the GR54. At that time I was not using digital photography and I was backpacking therefore didn't stay at many of the refuges, so my records are not so detailed. I must say my memory has dimmed as much of your tour seemed unfamiliar to me. It sounds like a good excuse to go and do it again.

Thanks Alan, and Conrad - I'm pleased that it brought back memories for you.

Snow. What a way to finish. It's obvious from your posts Martin that this was an enjoyable trip with lots of variety, wild life and company along the way. Great.

It was a great last day, Gibson, after a couple of rather short days and a cool afternoon at Muzelle.

I'm just about to embark on phase 1 of the 'photo processing'. It'll be a long job...